Egypt (and everyone else) laughing at obama

If this is fake and the subtitles are just poking fun at him, it still reflects what many people world wide are saying about him and the US in general. This isnt the first such video I have seen and I am certain it wont be the last. I kind of took it with a grain of salt since I dont speak the language so to those who do and can translate it, thank you.

I still think the subject has merit. We are a laughing stock and our enemies no longer fear us and our allies no longer trust us. Hillary just said:

In a statement her own campaign Tweeted out as her marquee comment, Clinton declared: “Let’s be clear: Islam is not our adversary. Muslims are peaceful and tolerant people and have nothing whatsoever to do with terrorism.”

Its not just fake subtitles. There is something fundamentally wrong with some of these people. And they are making us into a world wide laughing stock.

originally posted by: DAVID64
Waiting for The Pack to show up and defend this clown. He talks a big game, but when it comes right down to it, it's nothing but excuses and apologies. He sits on his hands, while the rest of the world laughs and calls us idiots for electing him at all, much less twice.
Truth hurts sometimes, huh?

Obama is just a misguided soul abused from birth. His scumbag father abandoned him at birth, then his mom took him to a strange country.

When he finally found his first true friends and prayed together with them as they faced west toward Mecca, he was abandoned again, stripped of his true Muslim friends, and shipped off to be raised by his racist grandmother, who would be scared to walk the same side of the street as him...

Only his communist benefactors kept him from being totally alone and isolated in his later years. No wonder he is so messed up!

originally posted by: Logman
Right wing hate of Obama is so thick you can actually taste it.

Middle America centrist disgust for what Obama has done to subvert this nation, destroy our economy, make enemies of all our allies, and instigate this horrific flood of refugees onto European countries with his actions to destroy any remaining semblance of government in multiple countries, is finally being expressed openly and truthfully.

In the video, one guy is shown giving a hug to whom?

The fact that you place no significance on it says alot too.

You guys are all the same. You talked big when king obama won and now you cant admit the fact that you fell for a touchy feely slogan that turned out to be nothing but a popcorn fart in a tornado. Hope and change turned out to be business as usual. The only difference is everyone except the people voting for king obama knew nothing was going to change. And after all these years of absolute failure and lies and incessant blaming you still cant admit that this administration is nothing but a joke. Health care costs are still rising in leaps and bounds, and the whole system is about collapse under its own. weight. So many providers and underwriters are pulling out its is destined to fail. Its like a homeowners association that is so screwed up people just pack up and leave. Every time someone leaves the cost per resident goes up. By the time it falls apart the last few suckers left are paying the whole bill and are threatened with foreclosure if they dont. Obamacare is exactly the same thing. The alleged savings to consumers, you know - the affordable care that never materialized - was based on complete participation by every eligible person. The more that couldn't or wouldn't buy the insurance, the higher the price went for those who had no choice. It was destined to fail and everyone knew it except the people who voted for him. And it never ends.

This nation is becoming a joke on the world stage. Russia and France have done more damge to ISIS in two months than king obama has in the last seven years. I am sorry if the truth hurts, but we cant afford any more lies and looking the other way. clinton is just an extension of obama, and in some ways is even worse. At least king obama admits to some of his mistakes, not even close to all of them, but some. the clintons are permanently set on 'lie and deny' mode. That will never change.

The video can be real or fake. For the purpose of the thread it makes no difference. The video reflects how a great many people view the US and our glorious leader. In all humor there is always a grain of truth. Without it, there would be no humor.

originally posted by: Logman
Right wing hate of Obama is so thick you can actually taste it.

In no way does that invalidate it. It was earned.

Though it is not just right wing. It is the 'if you have functioning brain cells - wing'.

A very interesting take on the 'how he got there' story line. It is a question I have asked myself more than once...

originally posted by: NewzNose
a reply to: Flatfish

Because it is a threat to global security. The Pentagon even put out a report on it. Weather patterns are changing, droughts are increasing in severity in places whilst floods get worse in others. Syria partly kicked off because drought has been forcing farmers into the cities. Populations are moving. You think that things are bad now? Wait until the unrest over water sources in the Middle East kick off.

EDIT: Here's a link to a report on the Pentagon report.
edit on 21-11-2015 by AngryCymraeg because: More information

I'm not laughing at Obama or U.S.

I have my own criticisms of Democrat foreign policy through Obama's two terms, but Obama the man is a charming, articulate man and if anything has been too reluctant to play the military side of being President. Isn't that what the U.S wanted after Mr Bush? The Bush presidency was certainly tarnished in the world's eyes as being too hot on the military action. Bill Clinton was the same as Obama in many ways. Under his watch the Taliban and Al Qaeda became a threat that ended up you know where in the first months of Mr Bush's presidency. They don't call them Hawks and Doves for nothing.

I'm not laughing. Just watching the dynamics of politics and seeing how it always seems to be too much or too little, never just right.

May be Barak Obama will have the last laugh of all. He will walk away from this Presidency without a tortured soul and no particular country crying out for his arrest for war crimes. I think baby Jesus will like Obama, too, because he tried hard not to play the war card. "Blessed are the peacemakers..." and we all know what blessing they receive. 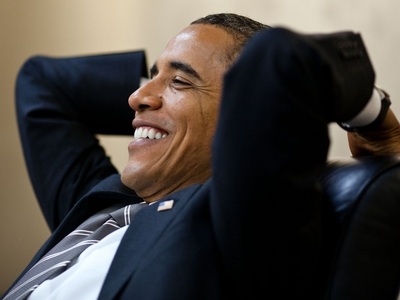 Big respect President Obama. The President who tried to be kind (a thankless task for a politician).
edit on 21-11-2015 by Revolution9 because: (no reason given)

Hell, I'm starting to worry about the entire USA.


Thank God Europe and the rest of the world have their sh!t together.

Where should I move? France? Germany? UK?

We are all in this nightmare together.

Hell, I'm starting to worry about the entire USA.

Thank God Europe and the rest of the world have their sh!t together.

Where should I move? France? Germany? UK?

We are all in this nightmare together.

Oh, we're screwed here in the UK, with Cammers and his Etonian chums in charge. It's the fact that the GOP appears to have gone raving mad that worries me. If anyone had told me a year ago that a bloviating egomaniac and a religious lunatic who thinks that the Pyramids were used to store grain in hermetically sealed rooms would be fighting it out for the GOP nomination, I would have laughed at them. And yet look at the current state of the race.

Yeah and your little rant is about as credible as the opinion of those three nuts around that table.

originally posted by: NewzNose
a reply to: Flatfish

Hell, at least Obama talked about climate change in the video.

Now, it looks like it's ObamaCare that's causing the rub.


Been saying for years that the Right Wing continues to radicalize, first through language and then through action, and they pose a greater risk to this country than global warming and terrorism.

What we see on this site is just the tip of the iceberg.