Time to change the way we deal with Muslim extremists

The way we have dealt with Muslim extremism has set the narrative that the west is at war with Islam, are we? Or are we at war with terrorists? We have decided to place the brunt of the blame on innocent refugees fleeing war torn nations instead of focusing on how to defeat ISIS/ISIL.

How do they manage to brainwash young people with their propaganda and what can the west do to counter their propaganda? Will more bombing runs fix it? Or will it reinforce the narrative that has been set that the West is at war with Islam, which will further help them in their recruitment of young people?

When we decide to slam the door shut in the face of the refugees because they're Muslim and because we think that every Muslim is a terrorists, does that not feed into the ISIS narrative? Does that not help ISIS spread the lie that the West is at war with Islam? 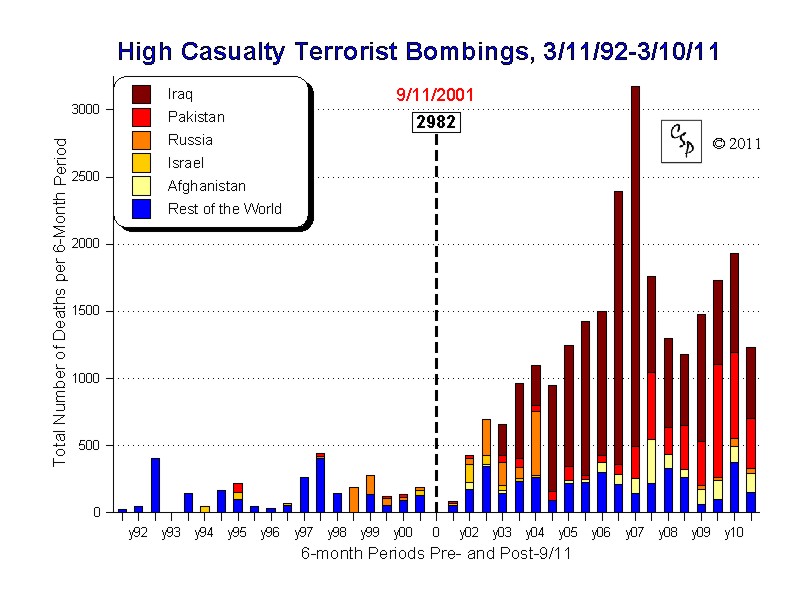 Does that graph tell you anything?

It tells me that terrorists want to be at war with us, they feed of it. It helps their propaganda, it helps them recruit people and helps terrorists groups like ISIS and Al-qaeda remain in power.

We need to ensure that we don't help propagate and promote an atmosphere that ISIS wants to exploit.
edit on 18-11-2015 by muse7 because: (no reason given)

thats how it is going to be

i just dont fully know who 'we' are or who 'they' are. i just know it is happening

It's a vicious circle for sure but it's too late now. ISIS need to be irradicated. If not for us then for the Iraqi and Syrian victims of this evil organisation.

originally posted by: TinySickTears
so how do you suggest 'we' change
your thread says it is time to change but have no suggestions

thats how it is going to be

i just dont fully know who 'we' are or who 'they' are. i just know it is happening

I honestly don't know either but I do know that the way we have dealt with terrorism these last 10+ years is obviously not working as innocent people continue to die on BOTH sides of this conflict..It's time for a change.

All we are doing is help ISIS spread their message

originally posted by: Wide-Eyes
a reply to: muse7

It's a vicious circle for sure but it's too late now. ISIS need to be irradicated. If not for us then for the Iraqi and Syrian victims of this evil organisation.

I agree, we either go all out with a ground invasion to help liberate Syria from both Assad and ISIS or just stop the bombings completely...this nonsense of doing things half way has not worked, by half way I mean just air strikes won't destroy ISIS, it will require troops on the ground.

Either we do that or we get the hell out of the middle east COMPLETELY.

we could just stop talking about it.
you mentioned isis, terrorists, and extremists like 6 times per in 3 posts.

here is a thought.
maybe people should stop hash tagging terror this and that all over twitter.
maybe they should stop their their clever memes or their oh so sad RIP photos plastered to their 8 million facebook friends.

maybe 'we' could try that. you know. just for something a little different

Are you under the impression if I wanted to kill you that if you just laid down that I would go away or change my mind?would you answer that question how you would react please, and why?

I totally agree with you, Muse and it makes me feel kind of icky, but you are spot on with this one. We need to stop bombing people and start concentrating our efforts on making life better for our own people.

originally posted by: muse7
by half way I mean just air strikes won't destroy ISIS, it will require troops on the ground.

Either we do that or we get the hell out of the middle east COMPLETELY.

i guess man.
i have to bow out of this one.
isis isis isis.
pretty easy to be on the ground in texas and declare to get rid of isis it will require troops on the ground. i dont think that is a decision made with a phone call or a text.
if it is all about the message being spread then i say we stop facebooking, twittering, and youtubing all that # for a bit and see what happens.
it gets old.
trying to get middle america pumped with some tweets to get all stoked about blowing # up or putting troops on the ground.
whos troops?
you? your family?

has isis been attacking this country?
people from texas need to go boots on ground cause isis attacked france?
sorry but i dont follow

i will leave you now

PS look at Germany and Paris , seems to be working out GREAT!

posted on Nov, 18 2015 @ 10:41 PM
link
This issue has me placed solidly in the middle. I don't know how to respond. Too many people throw those of middle eastern descent into a Muslim fundamentalist bowl. Fact is, the middle east has as many religions as the western world. How do we respond? I don't know that answer. I do know that I don't want another 9/11.

Having worked in an import business and dealt with many wonderful people from that region, I find it hard to paint with a wide brush. They are mostly just like us. They have families, jobs and the same aspirations.

Specifically though, Syrian refugee's are mostly male. There is something wrong with this narrative. It makes me feel hyper vigilante for my country. This is a hard row. I don't want to be a harsh right wing or left wing douche.

If we take in refugee's, we must be very thorough with background checks and the vetting process. As a safety net, we need oversight that ensures our safety.
edit on 18-11-2015 by EmeraldBeam because: mistake

posted on Nov, 18 2015 @ 10:41 PM
link
lets get out of their country. keep them out of our country... worry about building up ourselves as a nation and...oh wait sounds similar to another country somewhere else in the world? hm wonder who that could be? they are relatively large and rather quiet...

A more current chart from the source is available here:


In regards to the topic... I think the latest targets that ISIS has chosen to attack, will only hasten their defeat...

When you have angered nations that are usually at arms length, to set differences aside to assure ISIS' destruction, they may have just pushed the wrong button...

This on again, off again; bomb a little here, bomb a little there; bring our troops home here; send them to war there; continually squanders the gains we make.

Democracy is great; but in order for it to work we all have to stop acting like children when we don’t get our individual ways.

The solution is simple; pick a direction and then go all in – we simple don’t have the political will to do it instead we change direction at the slightest sign of adversity.

It's pretty sad that the terrorists now run around in vehicles and equipment that was paid for by the US taxpayers...

Finish them... end this, and please please please, stop intentionally trying to keep folks in fear and even worse, turn on others based on race, culture or religion...

I further read your sentiments and I agree completely, one foot in and one foot out is a quagmire and the reason we are stuck in a never ending stalemate, commit and occupy and erradate the threat or go home period. Well said sorry about the misunderstanding

Going for Assad is out of the question. To hit Assad would be a declaration of war against Russia. That ship has sailed.

The West's centuries-long meddling in the Middle East is the seminal issue, as you pointed out.

Dealing with that is the only long-term solution, short of unimaginable genocide.

originally posted by: Gryphon66
Muse, note here that your basic thesis is ignored in favor of mostly chest-thumping.

The West's centuries-long meddling in the Middle East is the seminal issue, as you pointed out.

Dealing with that is the only long-term solution, short of unimaginable genocide.

It's obvious that the way we are dealing with this whole mess is not working, but yet people want to continue doing the same thing over and over again thinking ISIS and the other terrorist organizations will just disappear.

originally posted by: TechniXcality
a reply to: muse7

Are you under the impression if I wanted to kill you that if you just laid down that I would go away or change my mind?would you answer that question how you would react please, and why?

They want to kill us but they can't, wishful thinking really. They can terrorize us but they can never occupy us. The whole point of terror is so the enemy lives in fear and it is the reaction to terror that makes it so effective. A response to terror is to take away freedoms to increase security (I know tired argument) which makes it that much harder to invade.

Who are the real benefactors of terror? The terrorists who get carpet bombed afterwards or the state? Let's say we keep security to a level that doesn't violate any American freedoms and say the terrorists use this weakness against us. Statistically speaking I am still more likely to die by the hands of my own government than I am a terrorist attack. If we respond by increasing state power I may decrease an already low chance of being victim to a terrorist attack but increase my odds of being victim to state brutality 10 fold.

Personally, I'll take my chances with the terrorists.