As expected, with the arrival of the massive El Nino, global mean temperature has really pushed upward. 2014 already set a record, but 2015 picked up right where it left off, and the last few months especially have not just seen record temperatures, but record increases in those records.

According to NOAA for example:


The October average temperature across global land and ocean surfaces was 1.76°F (0.98°C) above the 20th century average. This was the highest for October on record, surpassing the previous record set last year by 0.36°F (0.20°C), and marked the sixth consecutive month a monthly global temperature record has been broken. This record departure from average was also the highest on record for any month, surpassing the previous record set last month by 0.13°F (0.07°C).

NOAA State of the Climate

The trend right now seems to be only accelerating as El Nino continues to grow. 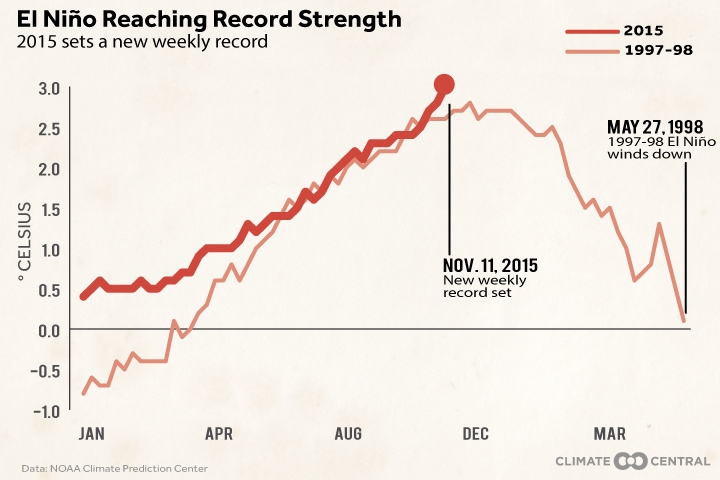 And there's also roughly a 4 month lag between the ENSO index and global temperatures, so this trend should continue for a while. 2015 will smash the 2014 record, but as it's shaping up right now 2016 may be even hotter still.

Anyway, so much for the "there's been no warming fer 20 years!" meme from deniers. Here's how the picture currently looks from the Japanese Meterological Agency: 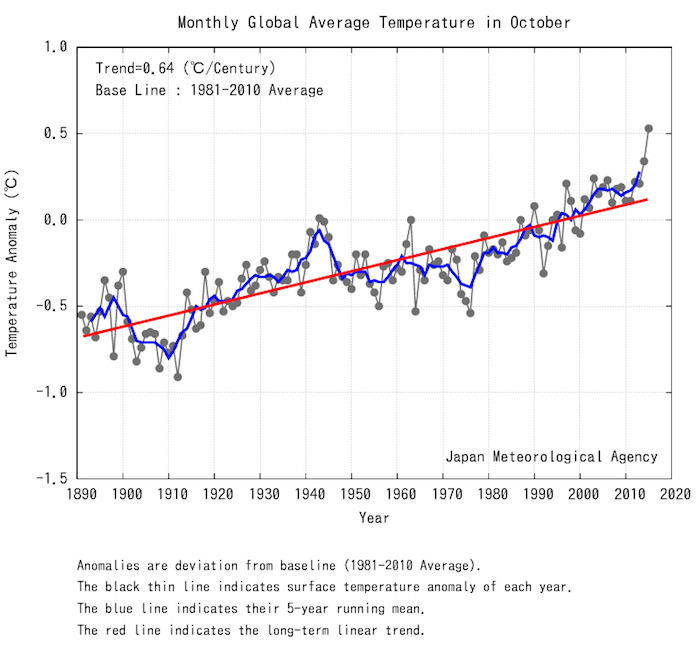 I've seen this movie enough times though to know that the usual suspects exclaiming no warming for 20 years will now just swap scripts for the ole "I don't think anyone ever questioned that it's warming, what we simply question is whether that warming is in fact man-made". Uh huh, sure you do.

You don't seem to "question" anything from what I've seen. You simply repeat the same boring, predictable talking points we've all heard a google times already. One second it's not warming, then of course it's warming but it's not man made, then sure it's man made but there's nothing we can do about it because China, then they were all predicting an ice age in the 70s... Whatever cue card excuse of the month deflects from the latest facts *yawn*.

The unavoidable fact is that global warming from increasing CO2 was first predicted in the 1800s. Nobody knew it was warming back then. Nobody had a computer to model it with. They just understood the physics of the Greenhouse Effect.

Those physics trump every stupid meme in this debate, but obviously that has little effect on people who prefer soundbites over science.

Pretty soon we'll all be hearing how there's been "no warming since 2015" again...

It certainly seems like its going to smash records, i mean in Australia its not even summer yet and its going to be 40 degrees celsius tomorrow.

Well there we have it, all I see is heat scorching our beloved earth!

As if dealing with ISIS wasn't enough, poor us..

Anybody got any contacts with the Galactic federation helpline, cause if this galactic overlords don't show up soon we be killing each other over limited resources.

And it's already happening both in oil rich Middle East and South China Sea...

Here is the thing about human caused climate change [SNIP], the problem will self correct. If you are right and anthropomorphic climate change is a real thing you will be happy to know that the Earth will auto-correct the situation so you need not concern your pretty little head about it. About 70% of humanity lives near the coast so if humans cause global warming they will quickly cause the change that wipes most of humanity out so the problem is resolved.

70% reduction in the human population caused by rapid sea rise and coastal flooding. Your post focus on ATS centers around climate change alarmist information that is clear. If that is your purpose for being here it is pretty clear you have achieved your goal. Few members present such a myopic posting behavior as you have accomplished.
edit on 11/18/2015 by kosmicjack because: removed ill-mannered content

You didn't think that through very well nor did you match it up to any of the predictions.

Your scenario is one where flooding would happen quickly and kill masses of people. No one is claiming that would happen.


There is no auto correction.


Your scenario is one where flooding would happen quickly and kill masses of people.

Flooding kills more people more quickly than any other climate phenomena in nature.

Flash floods do. Not so much from sea rise.

Get back with me when it's more like like whole digits or more. Then I'll agree with the use of that word.

Until then: it's nothing more than screaming how the sky is falling.

Stick to the topic. No personal attacks.

I beg to differ, since sea rise contributes to all flooding. en.wikipedia.org...

Yes. October was, globally, the hottest on record. But you didn't mention this:


Your scenario is one where flooding would happen quickly and kill masses of people.

Flooding kills more people more quickly than any other climate phenomena in nature.

Lol, I hope you realize that "temperature" is one of the variables that affects weather, which somethings may equate to flooding as you just stated.

Global Warming, is a game changer if the trend continues at this rate!


since sea rise contributes to all flooding.


It does? Rising sea levels contributed to flooding in Colorado? How does that work, exactly?
kdvr.com...

Get back with me when it's more like like whole digits or more. Then I'll agree with the use of that word.

Until then: it's nothing more than screaming how the sky is falling.


This month's temperature record set that record for ALL months by 3 times as much as the last record (which was the set the month before). Normally when you see these monthly records broken they are broken by about 0.02 C. This one broke it by 10 times that much. Damn right it's skyrocketing.

When has the OP ever freaked out?

I sense frustration on the OP's part due to so many like yourself who refuse to even listen to what the actual science and scientists have to say about the phenomenon that we are most definitely observing and can attribute to human activity, a large portion of that activity is burning fossil fuels.

At best the crowd who denies what the science is telling us will cite a pseudo-science piece from JoNova, Roy Spencer, or a handful of other vocal anti-AGW activists.

I also note how you guys(the science denying crowd) will resort to using terms like 'alarmists' which is clearly an insult and try to make it seem like the pro-science is freaking out and trying to incite panic, which clearly is not the case.

I seek good information and awareness of what impact our activity is causing on this planet. Your crowd seeks to cast doubt on the actual data, knowing that the layman is not well studied in science and using this ignorance to promote pseudo-science opinion pieces(i.e. JoNova, Roy Spencer, ect..) and appealing to emotions like the old it's all a hoax to raise taxes(easy sell because we all hate taxes).

So I challenge you to bring good science, real world data that contradicts the information the OP has provided. If you can't do that, then you are wasting this boards time and space with posts that say nothing and embrace ignorance.

originally posted by: Phage
a reply to: mc_squared

Yes. October was, globally, the hottest on record. But you didn't mention this:

Well apparently I'm an alarmist freak who's oversensationalizing. There's a few people here who seem to have trouble dealing with the harsh reality of these facts, so I didn't wanna upset them even more