Rhino Horn, The Rathkeale Travellers, And The House Of Windsor

posted on Nov, 18 2015 @ 03:54 PM
link
This story is a year old. I hadn't realised the House of Windsor had got involved. I knew Interpol were co-ordinating action but the involvement of British Royalty has surprised me. 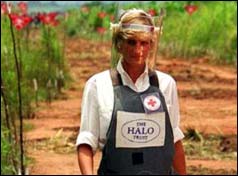 She was murdered after calling for an international ban on landmines.

Princess Diana has angered government ministers after calling for an international ban on landmines.
Her comments - made during a visit to Angola to see for herself some of the victims of landmines - are being seen as out of step with government policy.

The Junior Defence Minister, Earl Howe, has described the princess as a "loose cannon", ill-informed on the issue of anti-personnel landmines.

Prince William has targeted Irish rhino horn smugglers among others in a major campaign to end smuggling of illegal wildlife.


The illegal rhino horn trade is masterminded by the Rathkeale Rovers, a group of Irish travelers based in the Limerick town of Rathkeale who have raked in tens of millions reselling stolen rhino horns, say police in Europe and America

. . . At the height of the Rovers’ rhino horn-smuggling exploits, from 2011 to 2013, there were 67 thefts across 15 nations, from museums and private collections to auction houses and even zoos. Scattered individual arrests were made in 2012.

In early 2013, Operation Oakleaf came to a head, with coordinated raids across eight European countries that led to the arrests of 30 people with links to Rathkeale, including Richard Kerry O’Brien, the ‘King of the Travellers.’


Here's the twist. The Rathkeale Travellers are a major part of Dale Farm.


Putting aside the rights and wrongs of the planned eviction of Irish travellers at Dale Farm, more than few individuals with addresses at the site have been part of scam operations around the world. Crews of Irish travellers sparked a nationwide alert in Australia in 2008 selling dodgy electrical generators at inflated prices. (Pictured) Trading standards officials discovered a number of the men involved, all Irish travellers, gave Crays Hill and Dale Farm as their address. One group included Danny ‘Bishop’O'Brien and Michael Hegarty from Rathkeale, who have since been written to by the Australian authorities warning them not to come back. Back in 2004 James Gammel also gave the Essex site as his address when jailed for cigarette smuggling in Belgium. He was one of three Rathkealers jailed including Richard ‘Kerry’ O’Brien junior, recently convicted of rhino horn smuggling in the United States. His cousin, also named Richard, has emerged as the only male spokesman for the traveller sat the site, although there has been little mention of his own convictions for tobacco smuggling. Dale Farm has been described to me by Rathkeale travellers as “a come and go place” but the Basildon council have really tied themselves up in an expensive knot on this one.

Remember when all the spook 'anarchist' mugs wanted us to support Dale Farm? One of the activists who went there told me, "If they wanted help they shouldn't have stolen my phone. Thieving scum." Two of the main activists supporting Dale Farm turned out to be friends of Tony Blairs children. As if it couldn't get any worse Charlie 'The Traitor' Veitch turned up.

This manchurian candidate set a caravan alight for the cameras.

Then it transpired the council had illegally tipped asbestos waste on the site years ago and they had to get the travellers off so they could dig it up and disappear it.

Meanwhile there was big money behind it all from the rhino horn trade. And Prince William has spoken against it.

"Warning on notorious Rathkeale travellers in Australia"
www.fairtrading.nsw.gov.au...?
". . . reputed to be one of the world’s wealthiest organised crime groups . . ."

We've had them here selling their fake Makita angle grinders and the generators that only work once. They've done their crimes all the way to Australia. The spooks wanted British activists to flock to their defence at Dale Farm and have a big battle with police. It was a total failure for the spooks. Ha ha.

If you want a thread that has a clear beginning, middle, and end, go to a different one..
edit on 18 11 2015 by Kester because: reputed


She was murdered after calling for an international ban on landmines.


She was murdered after divorcing and dating seriously a guy who could have helped her keep her kids he had enough power and money to take her and them where they could not be reached, she had to die.

Beaten to death with an oxygen bottle in the back of an ambulance to simulate crash injuries.

Her body then mutilated to hide the fact she was pregnant by Dodi.

Allegedly told a friend she was about to take up the Palestinian cause.


Her haters must love the fact that if you type 'princess' into google it immediately suggests 'Diana'.

I was with some hardcore Scottish Nationalists after she died. One of them derided her as a clotheshorse. I couldn't help speaking up for all the effort she made on behalf of others, particularly over the landmines. They were bemused but they listened.


Princess Diana made the campaign to ban landmines an emotional issue, threatening to sour relations between Britain and America and to have an adverse effect on Nato, according to a US intelligence assessment obtained by the Guardian.
The report, written by an official at the American embassy in London and classified to be withheld from foreign governments, also reveals a frank assessment by the US defence intelligence agency of divisions within Whitehall over the issue.

Disagreement between the foreign office and the ministry of defence - which was more sympathetic to US concerns -led to a US-prompted loophole in the 1998 Landmines Act. The loophole is attacked today by a Nobel peace prize-winning independent campaigning group supported by the Diana Princess of Wales Memorial Fund.

The UK Working Group on Landmines criticises the act for excluding anti-tank mines, and for allowing British troops to participate in Nato military operations involving minelaying so long as they do not actually handle mines themselves. It also says British and US cluster-bombs - many of which lie unexploded in Kosovo - should be treated as anti-personnel mines.

The US intelligence report, dated December 1997, describes a landmine ban as "a very emotional issue because of the late Princess Diana's involvement in humanitarian de-mining and APL [anti-personnel landmine] abolition".

The Ottawa treaty outlawing anti-personnel mines - which the US has refused to sign - "could have negative effects upon the Nato alliance and become a divisive issue between the US and UK", it says.

The report - which was forwarded to the US National Security Agency - warned that "decisions were being made in the heat of emotion rather than cold common sense". It added: "Nato countries could get rid of a defensive weapon that in a few years' time they might need in an unforeseen region of Europe or the world."

It describes the MoD as "sympathetic to the United States requirement for landmines in Korea" and that the ministry "understands the types of 'smart' mines the US wants to keep".

It continues: "The same could not be said for the foreign and commonwealth office (FCO). The FCO has just presented its ethical foreign policy against the sale of weapons to and support for authoritarian regimes. Its policy toward landmines will be in favour of a zero tolerance application of the [Ottawa treaty].

"The pressure that the Labour government will be subjected to should not be underestimated," it says. "Special interest groups and public opinion will press the government to apply the articles of the treaty to the letter, once it is ratified by the 40 required countries."

It cites, as "an example of the emotional impact of the landmine debate", public support in 1997 for defence secretary George Robertson to build on Diana's legacy "to make sure that innocent, ordinary, decent people in areas of conflict don't have to suffer from the poisonous legacy of those who were engaged in conflict".

Princess Diana's involvement in the drive to outlaw landmines transformed the campaign here and increased pressure on governments to produce a global ban. In high-profile trips to Angola and Bosnia, she drew attention to the suffering of mine victims.

However, she was criticised by Conservative politicians for straying into the political arena and being "a loose cannon", "ill-advised" and "not helpful or realistic" in demanding the abolition of landmines.

The Labour government rushed through an act to sign up to the Ottawa treaty outlawing mines shortly before the first anniversary of Diana's death.

However, the UK landmine working group today points to serious shortcomings in the Landmines Act, which excludes anti-tank mines as well as other weapons, such as cluster bombs, which have a similar effect.

"Mines are defined in the act by their design rather than their impact," Richard Lloyd, the group's spokesman, said yesterday. By allowing British troops to engage in operations involving landmines and the US to stockpile mines on British territory - Diego Garcia in the Indian ocean - Britain was in breach of the Ottawa treaty it had signed.

The Kosovo war left an estimated 14,000 unexploded cluster bombs which have killed children, as well as two British soldiers, and maimed others.

The UK landmines group says the £6.2m the government spends on mine clearing is far too little given Britain's past role in manufacturing landmines.

The American defence intelligence agency report was disclosed to the Guardian following a request under the United States freedom of information act.

The princes have enviable bragging rights.