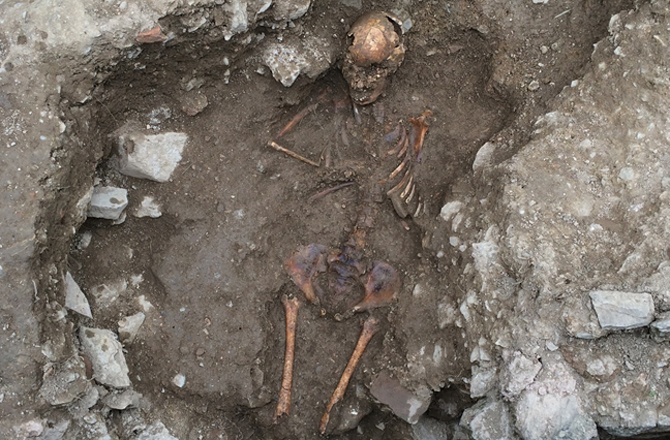 Italian archaeologists have unearthed the remains of a Medieval teenage girl who was burnt and thrown carelessly in a pit, her grave covered with heavy stone slabs. Her burial shows she was seen as a danger even when dead, according to the archaeologists.

At the same location, in September 2014, the team unearthed the remains of another “witch girl,” a 13-year-old female who was buried face-down.

Like other deviant burials, in which the dead were buried with a brick in the mouth, nailed or staked to the ground, or even decapitated and dismembered, both the face-down burial and the stone-covered tomb aimed at preventing the dead girls from rising from the grave.

The results of radiocarbon dating are pending but archaeologists believe the burial is older than the first which was was dated to about 500 years ago. Based on their examination of the bones, they believe the girl to have been between 15 and 17 years of age at the time of death. Researchers determined through analysis of the skeleton of the first "witch girl," that she likely suffered from scurvy. In this case, evidence from the remains points to among other ailments, malnutrition and anemia. It's noted that damage to the bones precludes diagnosis of scurvy.

It's not hard to imagine that symptoms of a condition such as anemia might have led superstitious villagers to fear a supernatural threat. I'm reminded of similar burials such as the Polish vampire burials and Torryburn Witch grave.

Lake Baikal in southern Siberia is the world's largest and deepest freshwater lake. How large you may ask? It's been estimated to contain as much as 20% of the world's total unfrozen freshwater. Recognized for its impressive biodiversity (including the world's only true freshwater seal), it's been called the 'Galapagos of Russia' and designated a UNESCO World Heritage Site. Until recently, it was also touted as one of the cleanest in the world but now it's being invaded by masses of green and black slime. 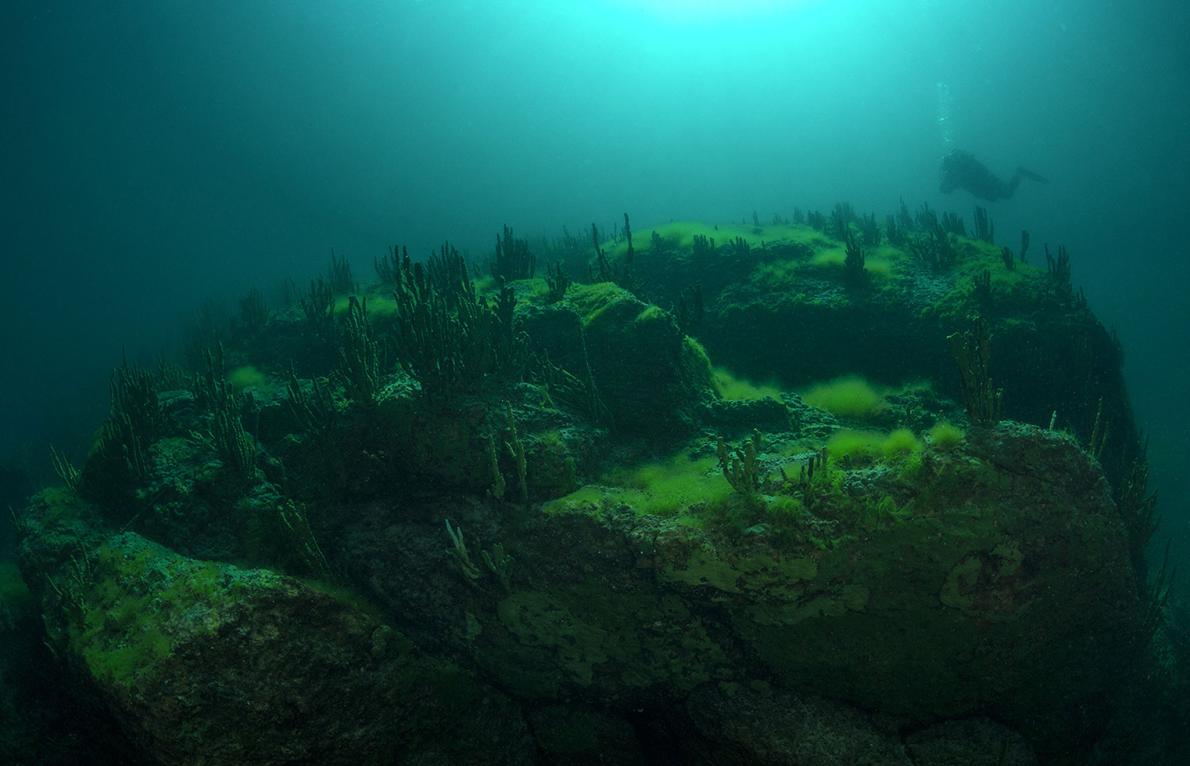 An article in the Siberian Times focuses on diseased sponges accumulating in masses of black slime in parts of the the lake. Another article in National Geographic and invasion of 'green slime' and massive carpets of algae that have overtaken the lake (picture above). What's causing sponges to die and algae to flourish? Scientists haven't pinned down a single source but point to a number of possibolities from untreated sewage and fertilizer runoff to piles of garbage found in the lake and the operation of a recently reopened paper mill on the lake's shores.

However, Lake Baikal is also associated with quite a lot of myths and mysteries. Like many lakes, it has a legendary lake monster. In this case, that monster is known as Lusud-Khan or Usan-Lobson Khan to the indigenous Buryat and it's an OLD legend, with the 'Water Dragon Maste' depicted famously on a stone stele that is estimated to be more than 2,000 years old. Speaking of Khans, there's even a legend that holds that Genghis Khan was born on an island in the lake. History is full of references to strange beasts encountered in and around the lake but many of you may be more familiar with the more recent theories involving UFOs/USOs, an underwater base and possible extraterrestrial humanoids residing in its depths.

I would need many many threads to details all of the myths and mysteries of Lake Baikal but here's a good jumping off point. Also noteworthy is was that a fireball meteor was recorded splashing down in the lake last month. All these circumstances have led some to some less conventional speculation to these changes in the lakes ecology.

So the strange slimes growing on Lake Baikal aren’t so strange after all … or are they? The filtration plants have been functioning improperly without repairs for over three years. Could someone (the government perhaps?) be trying to kill the aliens believed to be living in Lake Baikal … or at least drive them out … with pollution? Or are aliens creating the slimes and killing the lake to get rid of humans? Are the slimes a result of UFOs or the recent meteor?

This post has grown faster than I'd anticipated but I've got enough room to squeeze in one more!

Daily Mail - Waking up at the SMACK of dawn: Alarm clock slaps you in the face to get you out of bed

Simone Giertz, 25, who describes herself as 'somewhat of an expert in s****y robots,' built the torturous device on her houseboat in Sweden.
Positioned above the bed, the arm whips around to repeatedly slap the slumbering person in the face when their alarm goes off.

Really not too much to be said here. It's a robot arm that smacks you in the face repeatedly. The video speaks for itself:

There goes the first of Asimov's Three Laws!

posted on Nov, 18 2015 @ 04:39 PM
link
This sound analogous to the "Red Algae Rain" event that occurred in Spain, and the "Viscous Blob", 3 meters deep discovered off of Sweden's shores.

Here the interesting part of that link you provided...

posted on Nov, 18 2015 @ 11:44 PM
link
so out of all of that you only gave a damn about fn algae and robots you all cry balls when its an islamic or hebrew or christian victims but oh its a pagan witch who was most likely tried unjustly and found guilty by the same nefarious assholes that are in charge of the same church today
edit on 18-11-2015 by malevolent because: (no reason given)

From what was reported, there's no way of knowing if she was tried and executed as a witch or if she succumbed to an illness or died in some other way that wasn't homicide. There's no mention of evidence of violence (marks, fractures, etc) though it does sound like she was unceremoniously placed. There's no way of knowing if she was a pagan either. At this point, they haven't even gotten back results of the radiocarbon dating and they're estimating anywhere in a range of about 900-1400 CE. I'm thinking the whole 'witch' bit is more of an educated guess at this point.

What is obvious from the burial is that somebody had some fear of her rising from the dead.

With regards to the young 'witches,' I sometimes wonder if these unfortunates had certain conditions or were on the fringes of ADHD. Mental illness takes so many forms and so many expressions that, perhaps, they had schizophrenia and the locals took it as possession? The same can be said for Tourettes with the vocal tics. I know it's largely mythical that Tourettes is defined by swearing. However the grunts, coughs and, sometimes, squeaks could unnerve an ignorant population.

Of course, a worse-case scenario might look something like the death of Farkhunda with a child being mindlessly killed by an hysterical mob. Whatever the case, if we try to imagine the scene of the last moments, it's quite chilling.

The Baikal slime just seems like change in progress, on time and never ceasing. The idea that a meteorite caused the slime is cool and reminds me of Richard Burton in War of the Worlds:

Wherever there was a stream, the Red Weed clung and grew with frightening voraciousness, its claw-like fronds choking the movement of the water; and then it began to creep like a slimy red animal across the land, covering field and ditch and tree and hedgerow with living scarlet feelers, crawling! crawling!

originally posted by: Phage
a reply to: Kandinsky


originally posted by: Phage
a reply to: Kandinsky


originally posted by: Phage
a reply to: Kandinsky

Yeah it's largely a myth that we used to burn, beat or drown 'witches.' I spent a little time at uni studying the history of witch trials and most trials were based on snide allegations. The accused were usually released. Jealousy and bitchiness will have spurred a lot of them.

...plus profits for the European witch-finders.

I had ancestors who were hunted as witches, well most about anything,they could come up with..

Maybe she was killed but they didn't pile on enough rocks?

posted on Nov, 19 2015 @ 08:49 AM
link
the alarm clock seems effective for those that are heavy sleepers but i think it would be cool to have two hands attached that massage your scalp and wake you up.