Boeing's CMCA could be more relevant today than ever before.

posted on Nov, 18 2015 @ 12:36 PM
link
Back in the mid seventies, during the B-1 development, the Air Force considered a Boeing proposal for a 747 derivative cruise missile carrying missile truck (CMCA). In this proposal they would stuff a 747 with 80 - 100 AGM-86 cruise missiles. The idea never made it off the drawing board and was dropped in favor of more conventional strategic bombers.
Today however, I think this idea could have much greater potential than it would have had 40 years ago when coupled with the sensor fusion and net-centric mantra of today's US military.

Imagine if you will the F-35, F-22 and LRSB's (and other stealthy ISR assets) prowling the battle space and finding target after target but not having the munitions stock pile on board enough to defeat those targets. Using their sensor data, they then send those coordinates to a 747 derived CMCA that is on station just out of enemy air defense range. It is carrying 100-150 AGM-158 JASSM low observable cruise missiles, more than can be carried by any other current bomber, each tasked with the coordinates of the available targets relayed to them by the stealth assets in the battle space. It could act as the LRSB's right hand man so to speak and would compliment that aircraft's abilities in a way that hasn't been seen before in the battle field.
With the 747-8's un-refueled max. range of 9000+ miles at .85 mach, add to that the max range of the AGM-158-ER of 600+ miles and that gives the US Air Force a quick and efficient way of bringing a lot of hurt to the battle field in a relatively short period of time. 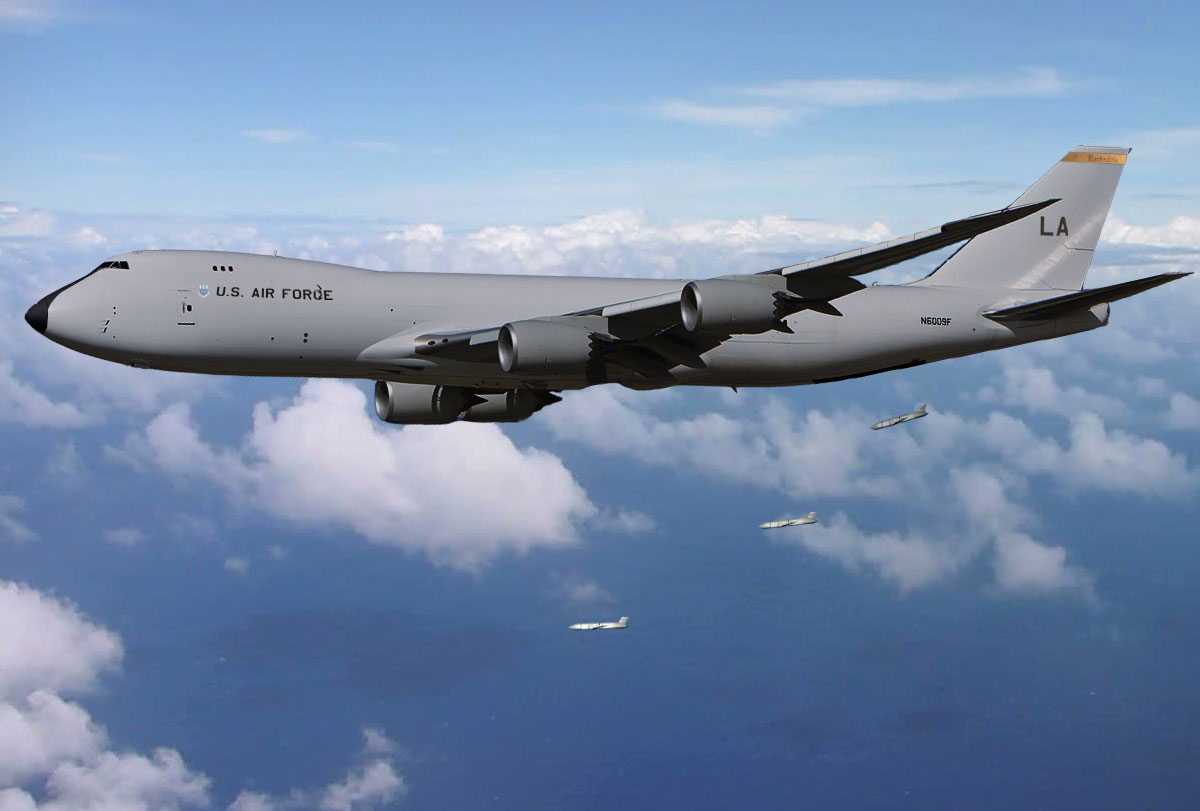 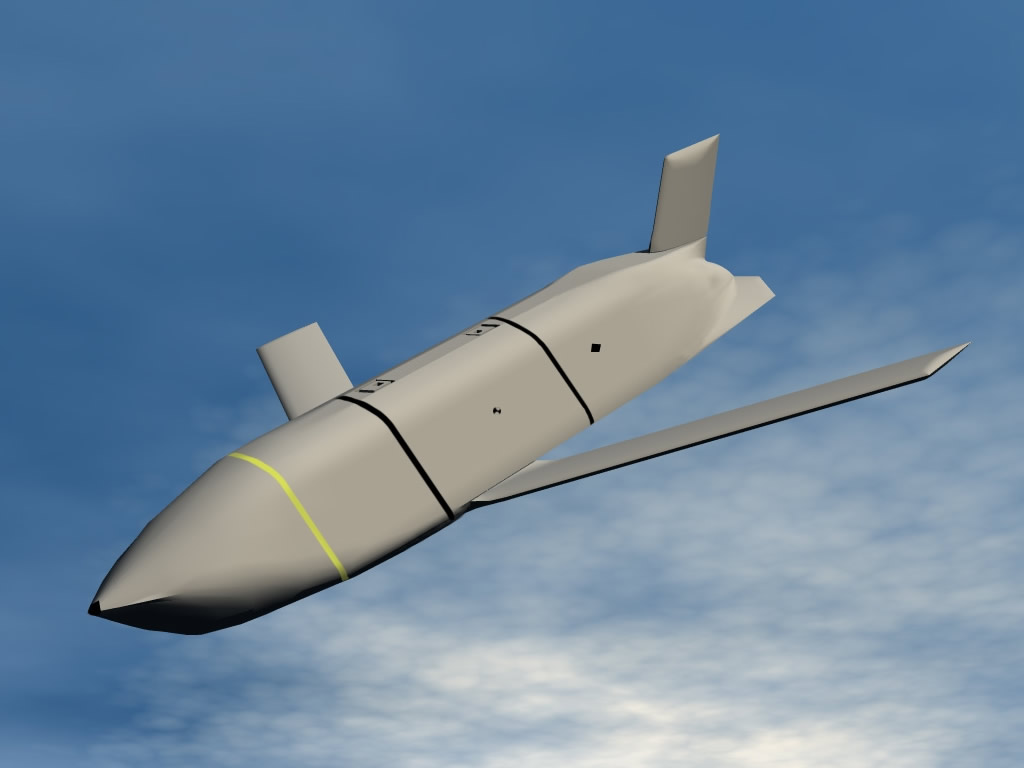 Yeah, it's not a fighter so the idea would get shot down by the Air Force's fighter mafia quicker than an F-22 could shoot down a MIG-17.

posted on Nov, 18 2015 @ 01:34 PM
link
i think its pointless to expect to take off and drop ,why not just deploy from space for some situations this might be viable but i prefer geo- stationary nukes on movable satellites as long as their was plenty of back-up devices to ensure it did not come crashing to earth ,maybe even a securing line to other things like iss ,but then boeing should not build it as they still think planes are viable.
edit on 18-11-2015 by stuthealien because: to insert the word "are" as i completely missed it out

Though I think it needs some Auto guns to shoot incoming bad guys.

posted on Nov, 18 2015 @ 02:21 PM
link
There's the risk that all those munitions could be lost in a single air crash. But then there are refueling aircraft that are modified Boing 747's with passenger compartment replaced with fuel tanks.

Definitely would need anti-aircraft cannons at each end, like a Shackleton bomber.

It's the same risk you take with any bomber. The only difference is the number of munitions on board.

The latest laser defense systems would be pretty effective I think. It wouldn't be flying alone either.

The NGJ passed PDR. Put some hard points on the wings and hang a SNIPER pod on one side, NGJ on the other.

cause this sorta makes sense as a realistic replacement for the b52.

posted on Nov, 19 2015 @ 02:00 AM
link
Has been tried in warfare before with He111,s with V1,s and Betty Bombers with Okha kamikazi,,result cannon fodder for fighters..Even if the allies had complete air superiority it would be too much of a risk to launch a high profile target like a 747 in return a sub or naval asset can surface launch Cruise missiles with ease.

posted on Nov, 19 2015 @ 03:12 AM
link
I can't help think in Syria we are running out of targets, unconventional militancy hiding with civpop requiring more int. Maybe if we ever go after a near peer nation?

They also didn't have the ability to stay hundreds of miles from a target while launching weapons. This would be no different than a B-52 staying out of the area and launching missiles.

posted on Nov, 19 2015 @ 04:43 AM
link
Interesting reading history..Yes the tech today gives the old tech a run for its money but back then warfare had escelated tech at an alarming rate.

However on Christmas Eve 1944, 45 Doodlebugs were launched off the Yorkshire coast from beneath Heinkel He111 bombers flying over the North Sea. The bombers released the V1s aimed at Manchester, then turned back to base. Many of the missiles landed harmlessly; the worst was at Abbey Hills Road in Oldham where 27 people were killed.


45 V1s were launched in total. 31 crossed the Yorkshire coast, while 14 fell in the North Sea. Only 7 fell within the built up area of what is now Greater Manchester, and only 1 missile (out of 45) fell within the Civil Defence Area for Manchester (that one was at Didsbury). It was the furthest north V1s were ever used. 42 people were killed in the attack. 109 were injured, of which 51 people were seriously injured. The V1s were launched between 0500 and 0600 on the morning of Christmas Eve 1944. It took about 30 minutes from launch to the missiles falling to earth. Typically buildings were damaged up to a mile away. The missiles could not be guided with accuracy, hence they came down in fields, on the moors as well as in towns. Sometimes they would turn round or spiral down. A few of the Doodlebugs were well off target, one landing near Chester, one as far north as County Durham while another came down at Woodford in Northamptonshire. 1 of the attacking Heinkel 111s was shot down over the North Sea by Mosquito TA 389 while another was damaged by Mosquito HK 247 and crash landed at Leck in Germany, killing one of the crew.

The AGM-86B can be launched from over a thousand miles out. Unless they have an OTH radar setup they'll never see it coming until the missiles are detected.

If they were to use Tomahawks that would be even farther out. There's no reason this wouldn't work.

These would be WELL outside the combat zone and outside air defenses that could hit it. If the enemy did have a way to see it over the horizon and was able to launch fighters to go out and get it, they would be met with CAP before they could travel the 1000 miles to get out to it. Also, with over 100 cruise missiles on board it probably wouldn't be flying all by its lonesome and have defenses of it own.

originally posted by: Zaphod58
a reply to: Blackfinger

The AGM-86B can be launched from over a thousand miles out. Unless they have an OTH radar setup they'll never see it coming until the missiles are detected.

If they were to use Tomahawks that would be even farther out. There's no reason this wouldn't work.