posted on Nov, 18 2015 @ 10:52 AM
link
There were so many "unexplained mysteries" I personally experienced in my lifetime that I thought it alright to go ahead and start this series off at number 1001. I never documented everything odd that I could not understand before, this will be a first. Many of those unexplained mysteries are very small occurrences, things that a lot of people would not notice. I got a good attention to detail about my senses so I tend to pick up on things a little better than others.

Today it was 930am and I was writing in my journal outside in the sunny morning air. While I wrote I also had a few cigarettes. A total of three cigarettes, actually. I tossed the butt of the first cigarette at my feet where some small and light leaves were. There was a breeze that was barely felt on my cheeks, a breeze that couldn't stir the leaves or any other light debris that was lying about. At that area where I was sitting it was a good ten plus feet to the sidewalk and to get to the sidewalk you would need to descend a few stairs. Except for that opening for the stairs, the entire area is closed off with hip-high walls. 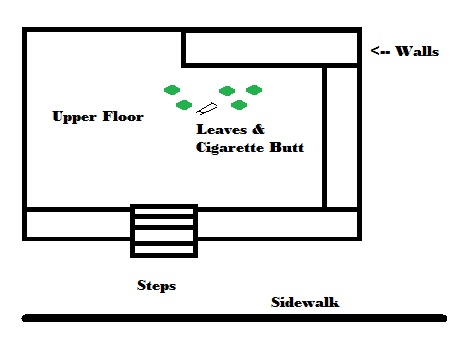 Before I lit my second cigarette I looked down and saw that my first cigarette butt was there and thought nothing special of it. I continued writing in my journal to the end of that cigarette then went to extinguish the butt. I noticed that the first cigarette butt that I looked at only minutes ago was gone. I looked around for it all the way to the sidewalk and the whole upper floor enclosure and it was gone.

Logic permits that if the wind blew hard enough to shift the cigarette butt it would've been inside the enclosure or between the foot of the stairs and the tall grass beside the sidewalk. The wind didn't blow hard enough during my sitting there to stir any of the leaves. So, theory two would suggest that maybe a bird took it, but again, I recall no bird landing near my feet and I would've definitely noticed it.

This disappearing mystery is a frequent one within the world of unexplainable things that I witness or experience. I'd seen people, animals and objects disappear unexpectedly without logical explanation for how they traveled that long distance in a split second to escape me seeing them.

Feel free to add your own take on this mystery.

posted on Nov, 18 2015 @ 11:47 AM
link
I think it's mere coincidence. I was having a smoke one afternoon. flicked the butt through the air and it landed standing upright. That will more than likely never happen again. As far as your instance being anything "paranormal" or "weird" I think you are letting your mind run rampant in trying to think of ideas that are probably, well, nothing.

maybe you stood on it without knowing and it stuck to the bottom of your shoe .

I too flicked cigarette butts like you describe and they did the same thing, landing on end or perfectly flying through a hole in an object. Truth is the cigarette butt vanished without a trace. It wasn't nothing.

That is a good theory but I was not standing during the whole time that I tossed it there through until I noticed it wasn't there anymore. I hadn't shifted my position at all.

Perhaps, but if the universe wanted to send me a message I would think that it should be divine or profound.

posted on Nov, 18 2015 @ 08:58 PM
link
I would wonder more about what critters have a taste for burnt out tobacco and tobacco flavored cotton, when I was in
"A" school in great lakes we had a squirrel who had a nicotine addiction. If someone was careless and dropped a lit cigarette or did not put the butt in the bucket the squirrel "FCC Nuthugger" (hey the chief named him) would dash across the smoke deck grab it and bound into the grass and vanish.

Mind this is the same squirrel who would come in the door stand in the foyer that served as the quarterdeck and salute and wait to be acknowledged before running though the lounge back to the court yard, and if it was denied it would run out the front door and back in and salute again.

But I digress, could you have ants, beetles, squirrels or any other thing that finds the flavor to its tastes?