Not all muslim are terrorists

Religion is like a gun - neither of them can kill you because one is an idea and the other is an inanimate object.

Add to either one an unstable human though and murder is a possible outcome.

My hat goes off to this Muslim, clearly he is not an Islamic terrorist, however, it will not stop other (Islamic) terrorists meting out death.

originally posted by: anticitizen
... still 90% of terrorists are muslims.

originally posted by: dreamlotus1111
im sorry since when should i have to respect a religion just for the sake of it and even more so especially since it doesnt respect my gender? im frankly not interested. and that goes for other religions as well. we can do without them.

You're not expected to respect a religion, what makes you think you must?
How about just recognizing the HUMAN rather than being ignorant to them entirely simply because of a faith they follow?

originally posted by: pirhanna
No, of course most arent. But i do find it incredibly ironic that those that bash christians all,the time for being too right wing are so pro muslim.

There is a difference between being "pro-muslim" and just respecting other Humans.

Here's the difference... the "Christians" are the ones actively trying to change laws and remove the freedoms and rights of others, there are no Muslim organizations in the US or UK campaigning successfully through government to remove the rights of others or in positions of power actively fighting to stop equality - there are plenty of "Christians" doing exactly that right now in numerous nations.

Most of us who are victims of this Christian radicalized opinion also recognize that not all Christians are backward, ignorant, delusional oppressors wanting to inflict their views on the world, just as we realize that not all Muslims are like that either.

Christians and Muslims can believe whatever they want to believe, that's their choice.
What is not acceptable is attempting to inflict those beliefs onto the society they are a part of, demanding the right to abuse others, campaigning to remove their rights and freedoms, with people in positions of power actively working to strip entire groups of people of their rights in a democratic society.

I can disagree with religious views, regardless of the religion they follow, AND respect the rights of the individual to believe what they want to believe.

Here's what it comes down to, whether you are Christian or Muslim - if it doesn't affect you, doesn't harm your rights or freedoms, you have NO RIGHT to be inflicting your opinions onto others. Christians (just like many devout Muslims) need to learn to live their life as they wish while NOT trying to dictate to the society around them how everyone else should live and behave.
edit on 18-11-2015 by Rocker2013 because: (no reason given)


originally posted by: anticitizen
... still 90% of terrorists are muslims.

And 95% of people who kill multitudes more than terrorists using aircrafts, drones and economic thuggery are Caucasian.
We all fight with the weapons we have


What a load of racist BS!

Muslim is not a race. Islam includes all races does it not?

The military and politicians defending against terrorists are not all Caucasians. They are composed of many races.

i just want to see how ordinary people react, like the comments in here..

I don't understand your post towards me considering I clearly said:

Islam is proving to be a bigger threat when it comes to how it's currently manifested."

I'm an antitheist, my friend. I don't undermine the issues of Islam, or Christianity.

The majority of that post wasn't directed at you at all.

I see. Fair enough. My bad.

I actually made sure to include that because I know you're not that type, and I have a lot of respect for you. I'm not a very good writer, it's frustrating at times.

I think the very concept of the word "infidel" scares the crap out of people. Right or wrong, the term in itself is harrowing.

posted on Nov, 18 2015 @ 05:40 AM
link
I watched this video last night and was going to post it myself. I actually cried a bit. I found it all quite emotional but then again we Europeans are an emotional bunch

Not so uncommon as I first thought. Seems muslim hugs a worldwide.

originally posted by: IkNOwSTuff
There was something very pure and beautiful in that video and gesture, I'm not embarrassed to admit watching it made me tear up a bit.


And 95% of people who kill multitudes more than terrorists using aircrafts, drones and economic thuggery are Caucasian.

You are comparing race with religion?

One can chose his religion but nor his race.

Your attempt to defend the islamoterrorists was ignorant and racist.
try again...

We all fight with the weapons we have

And that's were terrorism is born.

WHO(TF) warned those innocent french citizens that they are at war, so they would also ''fight with the weapons they have''?


You are comparing race with religion?


Exactly. This person was.

Making religion analogous to a race is precisely why people erroneously attribute critique of Islam to be racist.

A way to distract themselves from critical thought, methinks.

originally posted by: IkNOwSTuff
And 95% of people who kill multitudes more than terrorists using aircrafts, drones and economic thuggery are Caucasian.

Ah, the excuses begin.
Nothing removes free will.
Those who murder other individuals are to blame for their own actions, and there is absolutely no excuse for any terrorist maiming or killing innocent people.

I don't give a damn what a government does, that does not and will never permit individuals to slaughter others in some sick and twisted notion of "revenge".

And it's certainly not working in this instance now is it. Within hours of them attacking France IS has been pounded in Syria and Iraq and will continue to be pounded in all hiding places.

This is how it's going to go now. We're going to pump billions of $'s into anti-terror strategies and military attacks on them in Syria and elsewhere. They cannot win against the might of the world.

Sometimes overwhelming force just works, and in this case it will too. This ideology will no doubt take time to eradicate completely, but with a concerted effort by our nations we will destroy IS in these nations and then spend a good decade mopping up their sickos in our countries.

France is doing absolutely the right thing right now. They are pounding IS positions (I do have genuine sympathy for any innocent people caught up in that, of course, and I think we all do) but this is the only solution. France is pounding IS with Russia and the US, they will eradicate the threat and contain it. Europe will enforce stronger restrictions on travel, and we will round up every suspect and investigate them to establish their risk.

What we're seeing happening in France today is an end to monitoring and a start of rounding up threats based on their credibility. Rather than watching people and hoping we can get more information, France is now physically rounding them up and checking everything, and I have a feeling this is what led to the evacuations last night in Hannover.


Those who murder other individuals are to blame for their own actions, and there is absolutely no excuse for any terrorist maiming or killing innocent people.


France is doing absolutely the right thing right now. They are pounding IS positions (I do have genuine sympathy for any innocent people caught up in that, of course, and I think we all do) but this is the only solution.

If there is no excuse for murdering innocents why condone it

posted on Nov, 18 2015 @ 07:35 AM
link
I agree that many Muslim are not terrorist and I am very happy that they are not following Muhammad:s darker teaching and falling into total duality. The Sufi has tempered Islams somewhat but even I agree with the Salafi and Wahabbi that Sufi is not Muhammad:s message. Sufism is logical and non dualistic and more peaceful and tolerant if they follow the ideas of Rumi.

Muhammad is the same kind of soul like Hitler and Paul for me. Soulless manipulators creating duality thru their ideas. There is nothing holy about them and their ideas. They are always failing to follow the universal golden rule and in force it.

Is it time to drop the old insane idols and evolve into something better than dumb religion idolization causing group vs group behavior?

Muslim can write non dualistic behavior and change the text in the Quran to become spiritually pure: 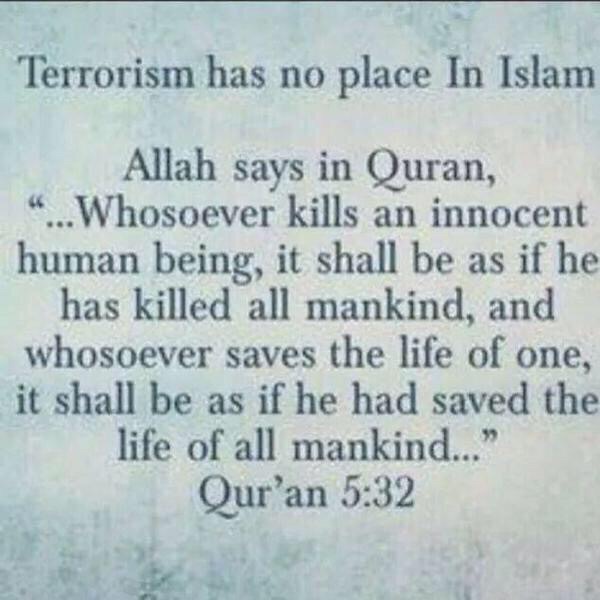 This is beautiful and I wish the Quran really said this because then it would be a blessing to the world.

But this is what Muhammad said:

Because of that, We decreed upon the Children of Israel that whoever kills a soul unless for a soul or for corruption [done] in the land - it is as if he had slain mankind entirely. And whoever saves one - it is as if he had saved mankind entirely. And our messengers had certainly come to them with clear proofs. Then indeed many of them, [even] after that, throughout the land, were transgressors.

Spot how Muhammad had to give himself a way to kill people for corruption that he can decide however he wants. Just call something a corruption later and he can kill that soul if it does not do Muhammad:s will.

I also will say that the old testament have incredible much dualistic hate speech that should be rejected by anyone sane. Just because other dogmas are also insane does not make a dogma healthy. So Muslim prove all humanity wrong and evolve to become the most tolerant equal souls humanity have ever seen. The kind of souls human will look back at thru history as a blessing to have around and not a curse.
edit on 18-11-2015 by LittleByLittle because: (no reason given)

originally posted by: pirhanna
a reply to: rajas

No, of course most arent. But i do find it incredibly ironic that those that bash christians all,the time for being too right wing are so pro muslim. They are even further right. They do not want to let you have an abortion. They think gays are an abomination. They make women cover themselves. I mean what do you think you are supporting? On what planet do you think muslims will let you be all super pc liberal if theuly had control?

Why does the pc left have no critical,thinking skills?

Unfortunately, I have to agree with you. I have watched this in awe on ATS. And it has been disappointing. Islam does not get a pass from me. Nevertheless, in defense of those perceived hypocrites, the current issues surrounding Islam are a bit different than Christianity. We have too many in favor of literally committing genocide(religicide?) on every Muslim on the planet. I cannot and will not support such a sentiment. Neither would I support it if they were Christians, or any other religion. I don't like the Abrahamic religions, but I will not lend my support to murdering anyone en masse, no matter how much I dislike their religion.