My friend quoted a tweet about the Paris attacks but it has a strange date on it. Can a computer genius see if this date is legit, thanks.

2h2 hours ago
Otaibi ‏@A_A_2001
@PZbooks
Ok we knew how you did it 😉😉😉
Put a tweet in the draft, then comeback to it one day, then you'll see same say to saved it still

Would this explain the date?

For the rest of the readers, this is a tweet from April 17th, that says Paris was attacked and 120 dead.

Ehem... APRIL 17TH. Waiting for confirmation on that one.

TWO HOURS after the initial reports of this attack, Wikipedia had a HUGE and detailed page on Paris Attack 2015. It had quotes of old Prime Ministers, had death tolls and injured, also references and much in depth detail of that night.

It was later removed, and edited.

In my opinion, as a natural skeptic and conspiracy theorist, this Paris Attack was set in stone like other events in the NEAR past.

ETA - I have got home and cracked down some research and debunking of my comment about the woman who was seen at multiple attack sites - after analyzing the photo on my computer (I always use mobile because im on the "go" usually) as well as others analyzing, the conclusion is, it IS a different person.

My apologies for misinformation!

It might, but someone else in another comment chain said that was false so idk, I've heard that he actually would had to have had access to the code to do it.


found this further down the page. 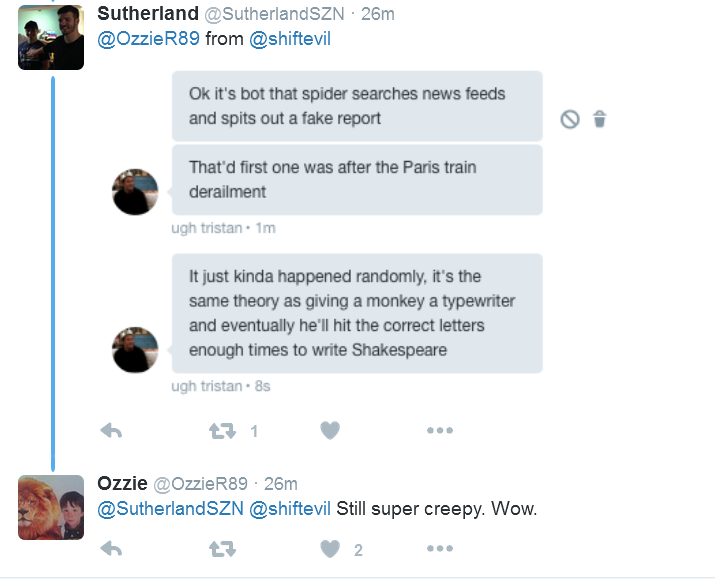 thing is i don't recall hearing about a train derailment in april, let alone one that was called a terrorist attack.


found this further down the page.

thing is i don't recall hearing about a train derailment in april, let alone one that was called a terrorist attack.


This was the train derailment:

That was 4 days after this supposed tweet went out though.

Why would anyone do that, it seems so inconvenient, especially when your trying to post BREAKING NEWS that you want to get out quickly. Unless.... its an attempt to deceive us and run Us around in circles.... naaah, doubt it.