You remember Turkey, don't you?

Turkey is now and has been for some considerable time the principle enabler of the Islamic State. For people who are a little slow, the Islamic State are the ones who have just claimed responsibility for the terrorist attack in Paris that killed 127 people and left a widening circle of pain extending from the City of Light around the world.

Our NATO ally, Turkey, has been a conduit (See map below.) for jihadi fighters moving into Syria, and for stolen oil moving out of Iraq to pay for that magnificent exercise in "nation building", started long ago in Libya by Pied Piper NATO's army of "rats". 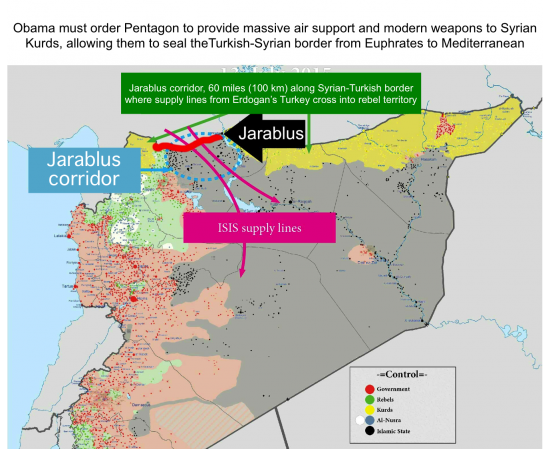 We've seen beheadings, crucifixions, desecrations, cannibalism, vandalism, theft, rape, slavery, displacement of populations, and a big bouquet of terrorist bombings and shootings, leading up to the most recent of these in Paris.

This insanity can be traced back to Washington and its neo-con community of Amero/Israeli dual citizen foreign policy quacks, and look where it has got us.

Beginning with the destruction of Gaddafi in Libya, Canada has been an enabler of this twisted "New World Order" vision.

I am supportive of Mr. Trudeau's intention to remove Canadian forces, small as they are, from the conflicts in Iraq and Syria. The first step to take, after all, in getting out of a hole, is to stop digging.

I wish he would go further though, and stop pretending that Turkey itself is anything but a very big problem. If Washington really has decided to crush ISIS, something that is not a certainty at all, then Turkey must be brought to heel by the alliance.

If Turkey is not made to terminate its support for ISIS, the writing will be very clear that NATO in fact, supports the activities of the jihadis in Syria and Iraq and has nobody but itself to thank for spillover terror in its own countries.

My hope in all this messy stuff is that Russia will be able to bring much needed diplomatic reasoning to the table . Boy toy JT is only along for the ride in all of this . At this point it is very clear that Turkey as well as other ME states have helped and are continuing to help ISIS/Dash . Russia occupies the main point in resolving the Syria / refugee issue and it will need to be acknowledged that they are the ones to work with . If Turkey and others wont then time to drop any support for them until they do . Turkey should not be a member of NATO just based on their own internal war with the Kurds .......time to fix this mess and get the Syrian people back to their country and help them re-build but first order of business is to shut down ISIS .....just my rant for the day ....imo . eta ....

This is the cost of reviving "The Great Game" and seeking to dominate the world's most important oil resources while trying to make trouble for Russia.

The patience of the Russians in all of this amazes me. Kudos to Mr. Putin. He very rarely lets the mask slip to show his real feelings, preferring only to fire the occasional salvo of sardonic ironic exasperation at the goings on.

posted on Nov, 15 2015 @ 10:57 PM
link
Prime Minister Trudeau did, in my opinion, make one interesting statement at the G20 conference that wasn't really given the proper interpretation by his legions of "ga ga" fans, bewitched as they are by his lustrous coiffure and his pearly smile (selfie heaven to many).

Is it possible that King Canute and the Little Dutch Boy are going to be discarded as figures emblematic of Liberal policy on climate change? Is pragmatism beginning to raise its intrusive and unwelcome face at Trudeau government cabinet meetings? Did they all go into the conference room for that first meeting and find Reality sitting in the chair it sat in during Harper government meetings, sipping its customary steaming cup of black coffee? Maybe so.

But he also addressed climate change, calling it a major economic concern.

"Climate change is a very real challenge, and how we prepare for the increasing pressures on our ecosystems and our resources and our climate will be something that we will be judged on in coming decades and generations," Trudeau said, delivering a message global audiences have not heard from a Canadian prime minister in about a decade."

This is not the sort of thing that King Canute, or anyone determined to hold back the tide, would want to hear. It is smart. I think it is a tacit admission that we are going to have to roll with "climate change" and that is a very different thing from trying to fight it.

People of Toronto, switch to a real newspaper and stop reading the local pablum. Newspaper editors at the center of the Canadian Universe, reach into your pants and try to locate your most precious possessions and use them to start telling the truth.

Turkey could cut off Islamic State’s supply lines. So why doesn’t it? David Graeber


It might seem outrageous to suggest that a Nato member like Turkey would in any way support an organisation that murders western civilians in cold blood. That would be like a Nato member supporting al-Qaida. But in fact there is reason to believe that Erdoğan’s government does support the Syrian branch of al-Qaida (Jabhat al-Nusra) too, along with any number of other rebel groups that share its conservative Islamist ideology. The Institute for the Study of Human Rights at Columbia University has compiled a long list of evidence of Turkish support for Isis in Syria.

. . . . The next time you hear one of those politicians declaring the need to crack down on civil liberties or immigrant rights because of the need for absolute “war” against terrorism bear all this in mind. Their resolve is exactly as “absolute” as it is politically convenient. Turkey, after all, is a “strategic ally”. So after their declaration, they are likely to head off to share a friendly cup of tea with the very man who makes it possible for Isis to continue to exist.

I'll go a little further than the Guardian columnist.

Turkey might not only support ISIS but might also be doing so at the tacit or sotto voce behest of the United States and the UK.

Is there a quid pro quo involved, like maybe, more robust assistance in gaining admission to the European Economic Community in exchange for helping to further an American/NATO project that began in Libya, to Balkanize selected areas of the Middle East in order to get control of the politics and oil resources of the region?

Skill testing question: Which one of these people has "dead eyes"? 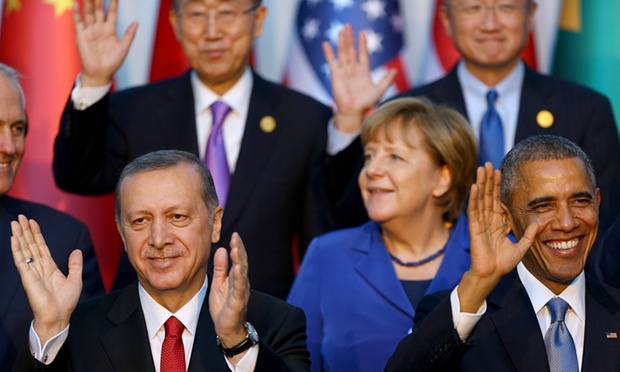