It's hard to set the scene for this one... 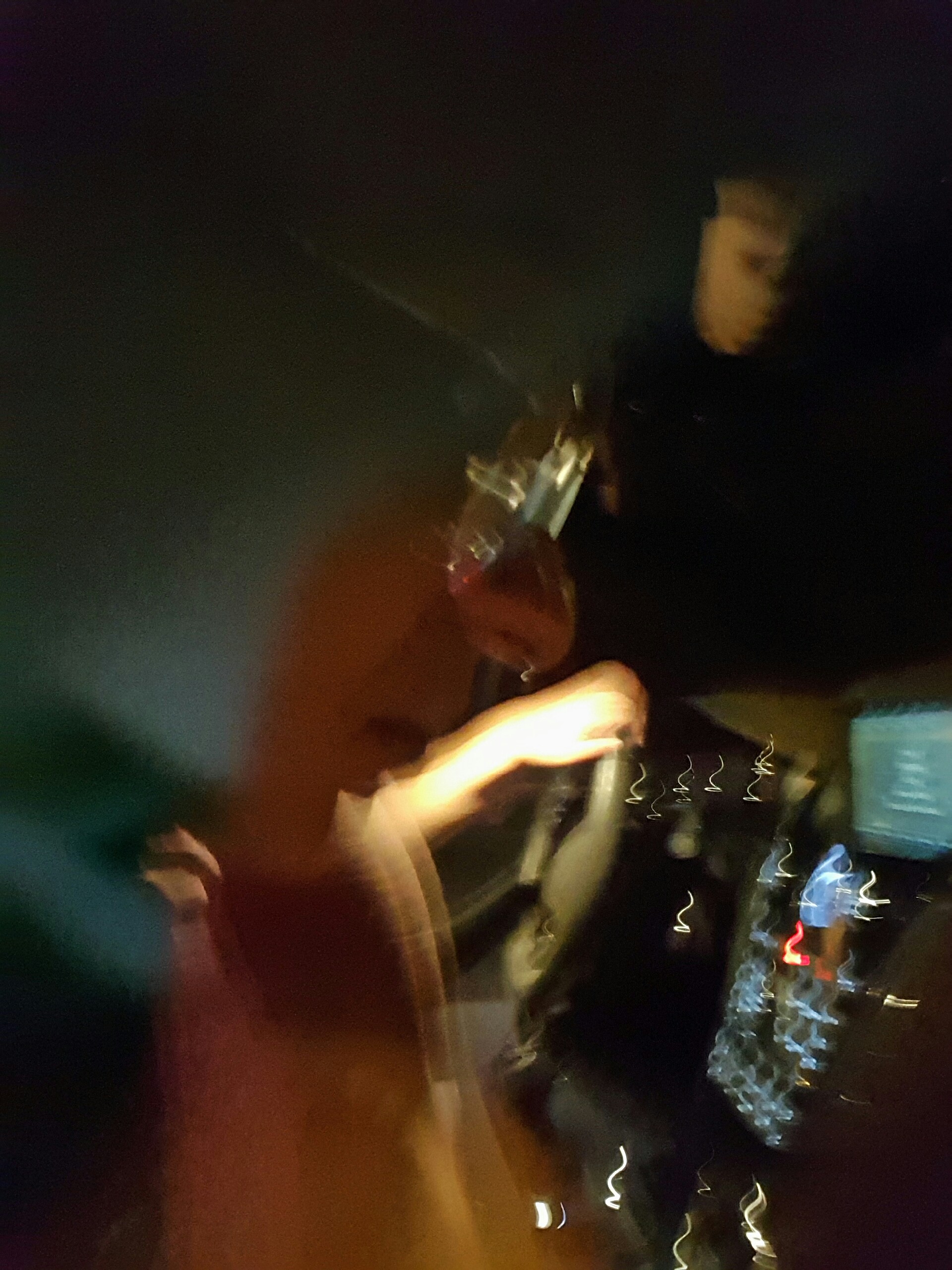 Now, with that pic out of the way, I have some questions and I'm seeking answers too...not sarcasm or funnies. You see the picture which was found in my daughters phone days later (after we had travelled a few miles together). She never took the picture so says she. As a matter of fact, she was looking down at her phone at the approximate time that this photo was taken. Furthermore, that's my arm in the left background on the steering wheel as I'm driving my car away from our destination.

It's incredibly distorted, but if you pay close attention, you will see a face with glasses in the lower left corner with an accompanying shadow hovering over the face. That's a completely distorted image of my daughter as she doesn't actually look like that in any way and neither is my arm that freaking white! If you continue to scan the photo which was taken on a Samsung Galaxy on 11/01/2015 at 10:00pm, you will also see a mysterious object located in the upper right corner. My daughter and I were leaving a friend's house party that evening. My daughter was actually looking at her phone when this photo was taken. No one else was in the car but the two of us, this photo just popped up in her phone.

How could a photo be taken in my vehicle while I am driving and my daughter (the only other passenger) is looking at her phone?

By the way, what the HELL is that thing located in the upper right corner of the frame? Is it the moon...a refection of the street lights which didn't exist at the time? Just what was it?

My daughter just recently (Thursday 11/12/15) noticed this photo in her phone and claimed she did not take it and has no clue how it got into her phone. She texted me the photo and I posted it here. This photo is raw and completely untouched except for her texting the image to me via her phone.

PS
Just so you know...we were leaving Altadena, California going back to my house in Pasadena, CA which is basically 4-5 miles away. There was no full moon that evening up here. What the hell is that face like thing...light or what?

Could the thing in the corner be a reflection of your hand on the steering wheel?
edit on 14112015 by Scallywwagg because: (no reason given)

Wow cool, especially since no one took the picture! Looks like a face, with a black bishop hat! Scary!

I am voting for the reflection of his right hand holding steering wheel, too.

The artifact in the top right, is clearly a hand upside down...not a moon.

Wired reflections for sure, that's a strange angle from either camera.

Hmmm...I guess it could be and I'm not opposed to your opinion. I have no clue however. This is a very strange occurrence IMVHO. That upper right image looks nothing like my arm. I suppose it could be though. If you zoom into the photo it looks like a face.

I'm stumped...I'm kind of flabbergasted to be quite frank

But, how do I square that with the fact that neither one of us took a picture? Also, you say it looks like the reflection of my arm? How's that?

I'm not rebutting you, I just don't get the whole thing...it's quite freaky!

posted on Nov, 14 2015 @ 09:02 AM
link
I'm just gonna chalk it up to a reflection...I don't understand the science behind that, but I'm going with it because I have no clue what the hell it is and that makes the most sense to me.

Still, it does not look like my arm in the reflection. Hell, my arm doesn't look like my arm. It's too bright as no light was on in my vehicle. Not to mention that neither one of us ever took a photo. My daughter was actually looking at her phone at the moment this photo was taken. The vehicle is a 2014 Cadillac CTS V Coupe.

After I read other people's replies now I see the hand reflection. As for your daughters face, it does look like she's looking down at something so it seems like it would've been kinda hard for her to take a "selfie" from that view... Hmm.. Very interesting! And a lil scary

I agree it's a reflection of your hand. The 'eye' on the face is the space between your thumb and finger.

Could your daughter have had the phone in her hand as she was reaching backward for the seatbelt and accidentally snapped a pic? I feel like I can see the phone reflected in her glasses on that side.

I've accidentally taken a lot of pictures. To me, it wouldn't seem like a terribly strange occurrence to have a picture I didn't remember taking on my phone - especially one that is blurry and seemingly random.

One possibility... If she was holding her phone and accidently snapped a pic (while scrolling, adjusting volume, or just turning the phone around in her hand, for instance) she might have snapped a picture of the passengers side window ---- That explains the weird reflections, distortion, and lighting, and also why you see her profile looking down.

I am a believer in many things paranormal, but I can't image why a ghost/demon/other dimensional being would reveal itself intentionally or unintentionally by placing a photo on a phone that looks like a photo taken by accident.

But I have no idea... I have no special knowledge here. Thanks again for posting the picture. It's always an act of bravery to share a personal photo of the unknown and subject it to scrutiny!

posted on Nov, 14 2015 @ 11:39 AM
link
I can describe to you what is photographed in the image. I can also explain the distortion, blurs, and reflections. People will try to chalk it up to simple, trivial anomalies, but I will explain why these anomalies occur to begin with when I have the time to sit down and write out a thorough post on electromagnetic thermodynamics and digital photography. It will be a few hours, so sit tight.

posted on Nov, 14 2015 @ 03:43 PM
link
The picture and the circumstances of it being taken are a little weird, even if the top corner image is a hand. The angle of the photo is an odd one as it's almost like someone else has taken it. Can't picture how your daughter would be holding her phone to capture that shot.

Hmmm...I guess it could be and I'm not opposed to your opinion. I have no clue however. This is a very strange occurrence IMVHO. That upper right image looks nothing like my arm. I suppose it could be though. If you zoom into the photo it looks like a face.

I'm stumped...I'm kind of flabbergasted to be quite frank


Are you sure the picture wasn't taken by someone on the outside of the car and they sent it to her?

The picture doesn't look like an accidental selfie. It looks like it was a close up picture taken from outside the passenger window.

originally posted by: Scallywwagg
The picture and the circumstances of it being taken are a little weird, even if the top corner image is a hand. The angle of the photo is an odd one as it's almost like someone else has taken it. Can't picture how your daughter would be holding her phone to capture that shot.


It does look like someone else took the picture, and the reflected hands seem to be in the wrong position from the hand on the steering wheel.

posted on Nov, 15 2015 @ 10:23 AM
link
The thing at the top-right of the image is certainly a reflection of your hand as it sits on the steering wheel below, you can see the thumb and nail.

It's very strange that an image was taken from this angle as you would have to put the phone up to the side of your face, look down and then try to find the 'Capture' button whilst not looking at it. Somebody would always remember if they have purposefully done this, unless she's playing a trick on you for whatever reason?

I disagree about this being an accidentally taken photograph because of the angle of where she is looking when it was taken. Surely if she was reaching for her seat belt or moving around, her face would be facing towards where the phone would be or look to be more engaged, rather than her looking quite focused on what is below her.

It will be interesting to hear what trifecta has to say on this matter
edit on 15-11-2015 by mwsmith because: (no reason given)