posted on Nov, 14 2015 @ 06:10 AM
link
I've been a little surprised by some of the reactions to the tragedy in Paris. No doubt it has been a human tragedy, but some of the responses have been worrying.

I've read posts saying, we have the technology to chip all people these days. That human rights are getting in the way.

Then there's the nuke em crowd. How does that make us any better than any terrorists?

If people are capitulating after an act of terrorism and wanting draconian security measures, there's not much hope for us really. Life comes with all sorts of risks, but I'd rather have risk in my life than give up human rights and hard won liberties. I'm sure I'll get flamed for this, but surely things like human rights and certain hard won freedoms are way more important than draconian security measures. How safe do you want to be. Should we aim to remove all risks from our lives. Would that make you feel better?

posted on Nov, 14 2015 @ 06:17 AM
link
Well the last time a terrorist tried anything here we just kicked them so hard in the nuts that the guy broke his foot

But realistically I'll treat it like any good Brit, i'll not let it change my life one iota.

The control freaks don't care how many have to die for them to get control.

I agree with what you say but when it comes to the saftey of my kids!!! I dunno id be willing to give my life.

None. Nada. to be precise.

posted on Nov, 14 2015 @ 06:33 AM
link
Speaking as an a American the only freedom I need is the second amendment, after that the rest are "garonteed". It will protect me and mine from a terrorist organization and a oppressive government.

I agree with what you say but when it comes to the saftey of my kids!!! I dunno id be willing to give my life.

I've read posts saying, we have the technology to chip all people these days. That human rights are getting in the way.

Then there's the nuke em crowd. How does that make us any better than any terrorists?

And here is the absurd, isn't it? Let's figure out how to get rid of the bees while we keep swarming their nest because we want their honey.
This world has gone mad, truly.
What good came out of all the wars US fought to bring "democracy" to people who didn't want democracy in the first place?
What good came out of UE trying to assimilate people who don't want to be assimilated?
Multiculturalism? Did Europe need it so badly that is justifying what is going on today?
Really, how are we better, socially culturally or economically than 60 years ago,when west and east were still minding their own businesses, each in their own halves of the world?

I don't know, but at this point it doesn't even matter the reasons. We are too deep in it to change the course now.
And maybe I'm just too angry at all this pointless carnage, but I see no real solution.
This or that way we'll have to protect ourselves.
This or that way we lose.
We've been played.
edit on 14-11-2015 by WhiteHat because: (no reason given)

originally posted by: hillbilly4rent
Speaking as an a American the only freedom I need is the second amendment, after that the rest are "garonteed". It will protect me and mine from a terrorist organization and a oppressive government.

Being from the uk I can't own a gun, but still don't feel I need one. There's more chance of me falling down the stairs and breaking my neck than there is me coming into contact with a terrorist gunman. I will still go down the stairs everyday. I will get in the car. I will continue to live without fear of being involved in a terrorist attack and getting struck by lightening

How many freedoms are you prepared to give up to keep you safe from terrorism[?]

This is stirring old memories from 9.11 when instead of focusing on who was behind it, we allowed ourselves to be led off blindly to invade Iraq, which had no hand in the act whatsoever. From the moment Dubya turned us NOT upon al Qaeda but on Saddam, I knew that something just wasn't right.

After that, we saw the formation of the DHS... which is basically the perfect tool of a police state, that can overstep established law enforcement at every turn. And then there were the proposed secret court processes, where arrests could be made and trials held completely behind closed doors and out of public sight.

It was all of this... along with other things, that helped inspired those who, even still today, question the events of 9.11 and in some instances, with solid foundation.

When I went to bed last night, I couldn't help but wonder... what was next?
One of my first stops this morning over coffee, was the UK's Daily Mail... and this is the top story headliner... 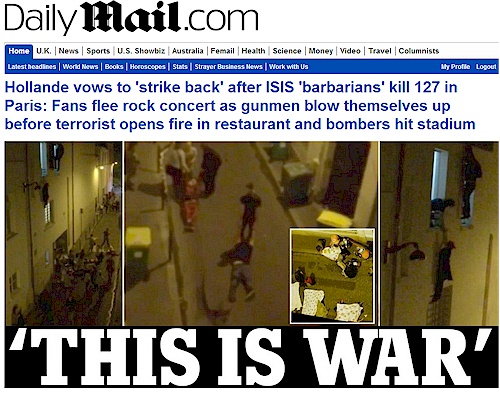 For all those who died, there should be justice. France has every right to go out and hold those behind this accountable.

I just hope and pray it is not a repeat of our experience in this arena.

posted on Nov, 14 2015 @ 07:09 AM
link
a reply to: redoubt yup the whole patriot act and TSA bs was all a massive over reach IMO. It ccertainly won't be the terrorists to blame for us losing our freedoms for security, not when we seem so eager to do it ourselves without coercion. Scared little people scarred to death of life.

posted on Nov, 14 2015 @ 07:19 AM
link
None. I will not cower in my home like a rabbit, waiting in fear for "something" to happen. Benjamin Franklin said it : ”He who would trade liberty for some temporary security, deserves neither liberty nor security.”
I know many have said it before, but I would rather die on my feet than live on my knees.

originally posted by: woodwardjnr
There's more chance of me falling down the stairs and breaking my neck than there is me coming into contact with a terrorist gunman. I will still go down the stairs everyday. I will get in the car. I will continue to live without fear of being involved in a terrorist attack and getting struck by lightening

^^^This! I wouldn't give up ANY freedom. My government may violate my freedom (Patriot Act, TSA, etc.), but I won't "give it up".

My heart goes out to the people all over this planet who have been affected by this attack.

posted on Nov, 14 2015 @ 08:02 AM
link
We don't need to give up freedoms or chip people. However western countries do need to close their borders and refuse any further immigration, as well as deport all illegals. We can't take it anymore - first off our economies are in ruins and we have a hard enough time supporting the people we have. Second we simply don't share the values that a lot of these middle eastern refugees have. Sharia law doesn't belong in the west.

I've seen some people here comparing the current immigration crisis to the Irish immigrants during the 1800's. They don't compare. The Irish were mostly Catholic and shared a lot of the same values that other western countries had at the time - because western countries have been historically mostly Christian. It was easier for the Irish immigrants to integrate. That's not the case with Muslim immigrants who detest women and women's rights and want them to be sex slaves who wear full body robes and burkas, who believe in Sharia law and want to kill or oppress people of other faiths. These people aren't going to integrate. What we saw in Paris yesterday is going to become a trend - one that won't stop as long as they remain in Europe.

The best case scenario for members of the EU right now is to break away and deport the refugees. The violence isn't going to stop until they get rid of them.

As for bombing the crap out of the countries where these terrorists came from - that's an acceptable response to a deliberate, planned mass murder of innocent civilians by militants pretending to be refugees and exploiting the generosity of the countries taking them in.

posted on Nov, 14 2015 @ 08:30 AM
link
So once again the PTB have won. People ready to hand them their limited freedom to gladly become a slave. I was not ready to give up my liberties in 2001 but so many scared citizens let the patriot act go through so they would feel more safe. Now people are falling for it AGAIN!!!' False Flags that have killed many people have been around for years. All so governments can promote an agenda that does not favor the masses at all. Listen carefully... if you expect to be safe you need to learn to defend yourself and not depend on a government that treats you like cattle to a slaughter.


...That human rights are getting in the way.

Not that I want to go stumbling all wobbly and irrational into CT territory... but could the timing possibly be any worse?


There's more chance of me falling down the stairs and breaking my neck than there is me coming into contact with a terrorist gunman.

disagree with analogy. staircases are part of the world. gummint can't protect you from. however, gummint is supposed to keep the terrorists gunmen away.
if we go 1984 we complain about loss of liberties.
if we laissez faire Paris happens and everyone complains that the gummint doesn't keep safe.
significant portions of the populace are on each side of the issue.

give the right credit for this much; many of us have been concerned about 'open borders' (US southern, Europe migrants). I think this incident proved us right. no accident M. Hollande sealed that border last night. let's see if others follow suit.

I fear my Government not terrorists.