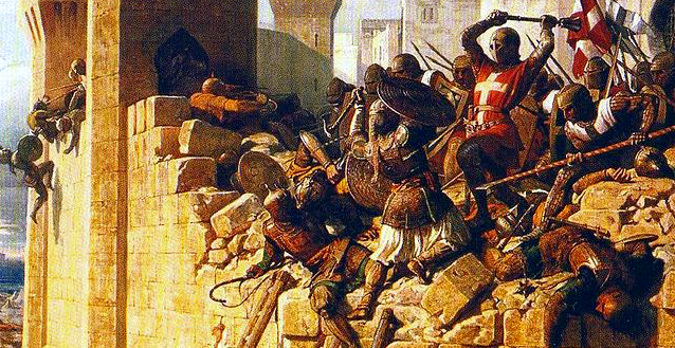 Friday the 13th is the anniversary of the death of Jacques de Molay, and I'm like, “# ATS, don't make me try and do this while loaded, #”.

It has since 2001 been my opinion that the whole deal in the Middle East is being played by the same players as somewhere around 1000 years ago: The Templars and The Assassins.

Do any of you have any thoughts on this at all? Help me out, ATS.

The guy that terminated the Templars and who was responsible for burning Jacques de Molay at the stake was Philip (The Fair) IV of France.

I'm wondering if this fascinates anyone else here as much as it does I.

I suppose that we don't believe in this sort of # anymore, right?

Well the only thing that comes to mind is the burning bush. Was it George W Bush senior or Junior? As for the Assassin's, well they remind me of flies and they have existed for millions of years. Don't worry I'm not being sirius; i will try to b sirius from now on.

Jacques de Molay was killed October 13th 1307, unless every Friday that lands on a 13th is an anniversary for him I don't see the link, just coincidence.

The Templars were initially created to protect Pilgrims on their way to the holy land, most of their power came from "traveller's cheques" and the fact you had to be a knight to be a Templar.

But, I'm all ears to conspiracy... Got anymore on these Assassins?

I do not think that everything just happened by accident on Friday thirteen
Man arrested..said "I am Syrian. I am here with 2 others...I was recruited by ISIS."
so refugees will be accused and they can return them all home with a clear conscience,
the truth is always different from those in the media

Was it a coincidence that "9-11" was "coincidentally" on the same day as the Battle of Vienna?

But maybe it's all just a coincidence. Move on, nothing to see here.

The Rise of the Order of the Assassins

Thanks for the link

Excellent thread btw, it's all coming back to me... Those were the chaps that left a dagger beside Saladin if I remember correctly.

posted on Nov, 14 2015 @ 05:06 AM
link
Perhaps the more obvious possibility is that the ISIS planners were aware of the well-known "Friday the thirteenth" superstition, and were deliberately exploiting it.

posted on Nov, 14 2015 @ 05:31 AM
link
There's the connection of the Eagles of Seath Metal to soccer, a few bangs take it to the next level and winged victory, Nike.

My suspicions were first aroused when it turned out the band in question weren't actually a Death Metal band but turned out generic West coast rock on a par with their namesakes, that the soccer team in the Nike video is Arsenal, who despite being based in North London have a French manager, currently linked with Paris saint Germain, and have had many of the top French players in their team over the years.

In conclusion then the mastermind of the attack was an Arsenal fan the likes of which would have been the only ones aware of the link to French soccer and the next level video by the Eagles of Death Metal...probably Baphomet himself.
edit on Kam1130317vAmerica/ChicagoSaturday1430 by Kantzveldt because: (no reason given)

posted on Nov, 14 2015 @ 05:46 AM
link
I'm not aware the Templars were after oil in the ME? The European goal back then was to occupy the eastern Mediterranean, a place that goods from places East (silk road, Spice trails) shipped from ports to markets all around the Med. Tariffs from this trade waxed empires rich.

The religious thing as always has been a load of BS (edit: Imo, to bring the greater part of the people on board with justification for conquest.)
edit on 14-11-2015 by intrptr because: (edit

posted on Nov, 14 2015 @ 06:02 AM
link
You got it. Best thing to do is use VLC Media to compress it as much as possible. It will upload quicker and then you wait for the server to decompress it which can take slightly longer, but at least it's arrived and you can carry on browsing without affecting it. Make sure you check back it's done. If it's not quite as you want it you can tweak it and label it so that the viewer gets the thing. Then you just need to promote and advertise through the usual channels. Hope this helps.

posted on Nov, 14 2015 @ 06:03 AM
link
If there were assassins then Paris has just used their own secret service to now have a 'legit' excuse to go to war with Syria.

Watch the blame game commence where ISIS from Syria are the keywords.

However, if France attacks Syria, then it can kiss goodbye to its aircraft carrier currently off Syria's shore when Syria hits back with a Russian 'Sizzler' missiles.

Albert Pike's world war 3 between Islam and Christianity has just moved up a notch.

Oh how the real daemons of war are now itching for fun, fun fun.

Wow you should check out London Calling by The Clash. It's all relevant.

originally posted by: NJE777
a reply to: intrptr

Wow you should check out London Calling by The Clash. It's all relevant.


Thats a song. Not sure how it relates to what happened yesterday.

originally posted by: DISRAELI
Perhaps the more obvious possibility is that the ISIS planners were aware of the well-known "Friday the thirteenth" superstition, and were deliberately exploiting it.