They shouldn't be there anyway....

Who knows who these people are for real?

Someone from that camp could carry out attacks and then go back to the camp as if they were there all along.

They need to go back home because this bloody war isn't ending anytime soon.. they are in as much danger sitting at this camp as rthey were back home.

Why is it an enemy camp?

What have they done...

Why is it an enemy camp?

What have they done...

I agree that you will find news stories in RT that you would never hear from the US MSM, but they are also guilty of slanting said stories to fit their agenda. That was my concern. Yes, the camp was on fire but why was what I wanted to know.

Still no real news on that.

According to reports it was a candle with an electrical fault and impeccable timing.

This is alleged to be the aftermath. The lack of media coverage of the aftermath seems suspicious. Or have I just missed it? 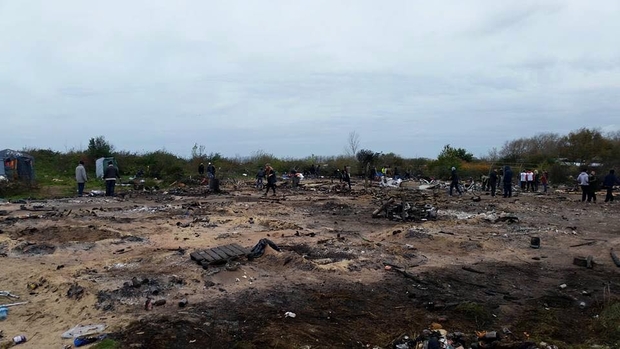 It looks possible for an arsonist to have approached the camp in the dark. The wind would do the rest. I haven't time just now to look into it deeply, but one thing that bothers me is the impression more people were filming than trying to put the fire out. Yet on previous occasions video seems to show more firefighting effort by the inhabitants. Like possibly they had a reason to document the camp burning this time.

It has also been blamed on both an electrical fault and a candle. Stoves and stovepipes are also fire risks. Especially in windy conditions when the stove burns hotter and the tarps blow around. Drying clothes over a stove often causes fires in these kind of conditions. I lived much like this for years and I saw a few fires. The first shout after FIRE! should be ARE THERE GAS CYLINDERS?

In a group situation fires tend to be noticed early and fought vigourously.
edit on 15 11 2015 by Kester because: paragraphs

posted on Nov, 15 2015 @ 09:19 AM
link
Report here claiming still no lead on cause of fire. And strangely no view of the burnt area. Investigation ongoing, perhaps so sensitive it has to be kept from the cameras?

A fire broke out at 'The Jungle' refugee camp in Calais yesterday morning. No one has been been seriously injured but 70 tents were destroyed.

A fire broke out amonst closely crowded tents in the 'Sudanese quarter' at around 00.45am this morning. The cause of the fire appears to be people drifting off to sleep leaving a candle alight. Fire spread quickly due to the wind and people were running around trying to evacuate the area and get people to safety. No major injuries, a few small burns and smoke inhalation problems but no major injuries or deaths. Lots of people's documents and papers were burnt and destroyed. The fire burnt and spread for around half an hour before fire engines arrived. Apparently the police were on hand trying to put the fire out with their water cannon. (Based on reports from people who were there). About 70 tents were destroyed

Many people have nowhere of their own to sleep and no blankets, there is a very urgent need for humanitarian aid to Calais as everything relevant that was in the Auberge de Migrants warehouse has been distributed already. It is very cold at night and impossible to sleep without shelter and blankets.

Now it's a candle left alight rather than a candle knocked over. No strongly consistent story emerging as far as I can see.


Lots of people's documents and papers were burnt and destroyed.

Wow, thanks for all those updates. Firemen didn't arrive for 30 minutes? This is definitely an area to keep a eye on.

posted on Nov, 15 2015 @ 11:23 AM
link
Isn't out time that someone told the camps inmates to go home. They are there supposedly to get into Britain which won't take them so they are therefore going nowhere.

Surely its not that hard to pass a law saying if you stay for over 1 month with no reasonable means of support or destination you will need to leave or be deported back to your country of origin.

As we simply can't take all these numbers and the risks are now patently obvious we need to take a realistic and not emotional look at exactly what we regard as refugee status.

Not every Syrian is at risk especially the sunni. The ones at risk are clearly groups like the Yazidi, Christians etc. The other day the grand mufti was waffling on about all live happily together, although he did in fairness mention the saudi influence and trouble they are causing. He didn't have any solution to muslims living with other religions without trouble.

Europe cannot afford to take terrorists or excessive amounts of unchecked people, its not rocket science and action to quickly vet and remove people who are not truly refugees and only financial migrants needs to be dealt with alongside terrorists. If we want peace on our streets and to feel secure in our countries we don't need gangs of unemployed people who won't prove their identity and have no references. Its cheaper to set up a decent reference centre to check exactly who people are than to have lines of body bags and disruption leading to the destruction of our countries.

Its about time also to discuss who from Syria is actually at risk . Whether one likes it or not, many do not suffer persecution like the Yazidi so we should be taking only those who do, not economic ones also.


The fire engines were seen to wait just outside the jungle for some time before a police escort assembled to go in with them. As they arrived somebody smashed the windscreen of the lead fire engine. We don’t know why this was done, maybe they were confused with the police who escort and always accompany them, maybe because people were angry with their slow response time.

As the fire service finally extinguished the remainder of the blaze, CRS riot police deployed in a cordon around the fire vehicles.

Elsewhere we see claims the French authorities have forced this camp to be built, and rebuilt in the same style that keeps burning down.

This does appear to be a wilful disaster on many parts.

It's like standing in the middle of a frozen lake and waiting for the spring thaw. What does anyone expect to happen? We've heard elsewhere the cafes are open till 4 in the morning and many types of food are available. Cocaine can be easily bought for 30 euros.

Some of those running businesses on site are having too much fun to think about the risk of a really big fire.

Sorry, got that wrong. That was a different, more recent, fire.