Refugees Welcome Bonn e.V. wants to comment on the incidents that happened on party on the Township on Nov. 7th and was co-organized by our group. On the party we observed that some men molested, touched and harassed women. As co-organizer we want to apologize. During the party we tried to identify the offenders and make the leave the venue; also we made announcements where we asked to stop this behavior immediately. However, these measures were not successful. We apologize for that! 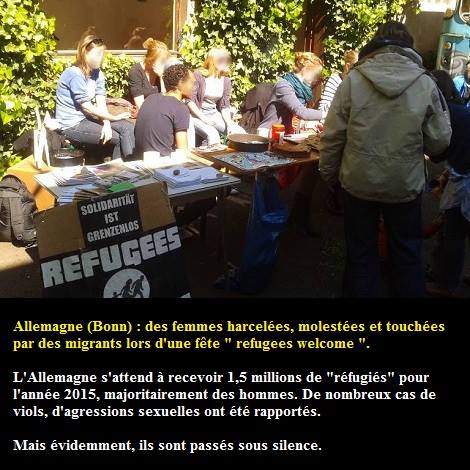 It goes on to say, they will not tolerate any bad behavior from these single men and No means No.


For that reason we will increase our efforts to give no space to such behaviour during our upcoming parties and other events. We believe it’s essential to treat each other with respect and share the idea of a general equality between all human beings. That necessarily includes, akzepting [sic] a „No“, when making advances to somebody, instead of forcing your will on another person.

Well thank goodness for that! The word "no" should do the trick. Unbelievable. It even goes on to try and minimize the reality that it is indeed a "cultural" problem but to just "tackle'" it as an integral part of integration into society.

This misbehavior does not, however, reflect the attitude of the vast majority of the refugees. But it entraps to a generalization that we do not want to follow. Single men, who do not know how to behave, exist in every country and society as well as patriarchal structures which come to light through such behaviour. However, we do not want to deny that there are cultural differences¬¬. But instead of just adversely pointing fingers at those who misbehave, we believe it’s as important for everyone in our civil society to tackle these differences in the daily integration.


(post by Metallicus removed for political trolling and baiting)
Siddharta

I bet you even did not try to read it, Metallicus. This is typical for anti people. The second link even does not exist anymore. I am rather bored of such threads and such answers.

ATS is no more against ignorance but rather FOR stupidity.

Nothing wrong with the links

a reply to: Siddharta

the problem of the refugees-welcome-crowd is that they think those muslims become civilized people with western standards as soon as they cross the border.

in reality it's a completely different culture coming from a war region.
and it seems we do everything for them so they can keep their medieval views and behaviour.

we have become weak...

Then I don't know. Just goes to a facebook page covering the same story. It works for me.

I have not been using this site long enough to agree with the specifics of what you said regarding ATS. However I do agree as ignorance was being erased from many, stupidity enflamed by attention seeking individuals began to fill in the gaps left behind.

I wonder if the welcoming party is still as optimistic and welcoming as they were before the event.

If it had happened to me, I honestly don't think I would subject myself to the same situation and risk it happening again.

That's just me though.

Sad sh!t, thx for the link. Next items on the list:


It is not showing up because you aren't signed into Facebook. I got the same response, but after signing in, it popped right up.

I very seldom go to Facebook, but it is the only site where I can receive or send information to the whole family at one time.

Like I said before, my family is massive, so it is the one saving grace of the horrible site.

Although certain traits are passed down to children from their parents like a higher chance of having an addiction or coming down with certain diseases, for the most part, I don't believe that any one group of people genetically have a predisposition for violence or to be hateful in general. These are learned behaviors. Although I believe it is true that some people are just born bad, for the most part if a newborn child whose parents are Neo-Nazis or ISIS... and that child was magically taken away just after birth and raised by kind, nurturing, dare I say "normal" people, in all likelihood that child would grow up to be a contributing member of society.

It seems to me that many people refuse to believe that when you have an enormous mass migration from another part of the world with a very different culture, you are not just taking in the people but that culture as well. In the case of what is going on in Europe and the influx from the Middle East, you have to look at what the culture is like in the nations they are coming from. I will not say that over in the Middle East they are all rapists and murderers or anything like that. That is foolish. I will say that you have to look at the overall big picture of their countries of origin (something that is difficult because it appears to be complete chaos and nobody knows who is coming in from where, for the most part).

If people whose families for generations have lived in nations where women are essentially considered second class citizens, even those that don't necessarily beat their wives themselves are conditioned to tolerate that by their neighbors, if not accept it outright or as a fact of life. For those who were active women abusers in their home country and saw nothing wrong with it, why would they suddenly change their behavior by crossing a border into another nation?

Lastly, I don't believe anyone knows exactly what is going on there crime-wise. The big media has their agendas. The mall media has their agendas. Without witnessing anything first hand or knowing anyone personally whom has, I can only use my BS-meter on a story by story basis. Something that I do find frustrating to that end though, and it relates to something that is bothering me here in the United States as well, is the seemingly complete disregard by the governors for the safety of the governed.

Here in the United States, whenever a horrific crime is committed by a repeatedly deported illegal alien, people attempt to point out that "crimes by illegals, percentage-wise, is about on par with everyone else." To me, that is a joke because while you can't stop all crime, if a nation takes seriously the security of the borders and tracking those here on temporary permission, the number of crimes by those that should not be in the country SHOULD be exactly zero.

Obama and Merkel frustrate me beyond belief because I believe they do not understand their role. Their role is to protect the people within THEIR nations. While every nation needs to be involved in the world, it should never come at the expense, safety or security of the their citizens.

My first thought upon reading the thread title was, "Is anyone surprised?" Why anyone would be, I cannot imagine! When a group considers all others to be inferior, and valid targets for abuse and killing, welcoming them in is madness.

What do you call men claiming to be refugees who molest women at a gathering to welcome them? I'd call them cowards, and worse.