Now I feel bad. Re-reading my post almost looks like I'm rubbing salt on the wound and that certainly wasn't my intention!

If I win the lottery tonight I will buy you an xbox and the game.

That sounds like a plan to me buddy. *Holding my breath starting......NOW* 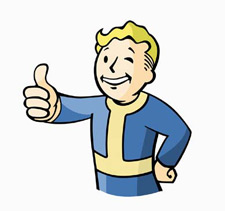 As you level weapons will get better.

originally posted by: peter vlar
a reply to: SgtHamsandwich

Now I feel bad. Re-reading my post almost looks like I'm rubbing salt on the wound and that certainly wasn't my intention!

Yeah, it was a slow, oncoming burn, but it's subsiding now. No hard feelings...lol

I will get to play it eventually. Patience is a virtue.

You think an Ultra Low Graphics mod could help you?

You're welcome to stop by the house and play anytime you like. Open invite. It'll give me an excuse to
unbox it early.

posted on Nov, 13 2015 @ 09:33 AM
link
I had to look this up, so I figured I'd post this info: When you put the "junk" into the work stations, it automatically scraps it. I spent a little while dropping things from my inventory and manually scrapping it while in the workshop screen.

posted on Nov, 13 2015 @ 10:06 AM
link
I am currently playing on ps4 and the game is awesome! I love the community building feature it reminds me a lot of dark cloud 1 & 2. I play a high strength and high intelligence character with lower other stats. I love me the bladed tire iron.

The new way that rads effect you by lowering your overall life bar is a cool addition and makes those rad zones extra risky. I like the dog but wish he was killable. Not because I want to kill him but it kinda takes away from the game having a immortal tank dog.


Combining the in-game drugs is a nice touch my character is a full blown psycobuff addict. F#$%Ing KILL he screams as he charges into battle.

posted on Nov, 13 2015 @ 10:16 AM
link
Not a huge gamer but I play maybe once a week on the PS4. Never played any of the Fallout games but I have heard nothing but good things. The only games I play right now are Destiny and Black Ops 3. So what do people like about Fallout? Is it the actual story mode or the online game play (if they have it??). Destiny I love because of the actual story mode and Black Ops I love because of the online play and ZOMBIES!!

I like fallout for: The story (usually have great writing), big open world to explore, different types of weaponry (the laser/plasma weapons are my fav), in game collectibles (bobbleheads that permanently increase a stat), a lot of side quests means a lot to do, and interesting enemies, to say the least.

Also, I love the fact that they FINALLY put a quick save option on console versions.(ps4 anyhow)
edit on 13-11-2015 by Autorico because: Added stuffs

originally posted by: Lysergic
a reply to: SgtHamsandwich

You think an Ultra Low Graphics mod could help you?

The thought has crossed my mind. My rig is poor though. It's a Core 2 Duo with a 200 series Nvidia. However its 4 gig ram and 64bit Win 10 so It might run on it. I can play Fallout 3 on low to med settings ok.

However, losing the graphics like that is half the reason I wanna play it. It's like eating cake after you scrape all the icing off.

Desperate times calls for desperate measures so we will see just how bad the itch gets.

I hear ya. I considered upgrading my computer, but it was gonna cost $300+. I broke down and got it for ps4.

Get some addictol ya chem junky :p

They should bring back addiction to radaway since you HAVE to use it... well I suppose you dont HAVE to...

remember fo1 and 2 addicted to radaway, not for funs, but because "rads" a plenty :p

posted on Nov, 13 2015 @ 02:07 PM
link
SITREP : General gortex has been in the wasteland for 17 hours now and had his butt handed to him on several occasions , is seriously irradiated and in desperate need of some clean water .... Send help !

Man I'd forgotten how deadly the wasteland was , Blow flies , mole rats and Ghouls Oh my ! , made it to level 11 in the time I've had and aside from a couple of technical issues and the omission of a couple of features the game is living up to my expectations , I think it looks great , sounds great and plays like a real FPS rather than Fallout 3's need to use VATS all the time because the shooting model wasn't very good.

originally posted by: dothedew
I think this is the best game I've ever played. I've encountered zero bugs, and the story is intriguing, combat system is overhauled from previous Fallout titles, making it 10 times better, and the customization system is a wonderful waste of time (not in a bad way).

My only complaint is the available weapons. All I've found, are the 10mm pistol, double barrel shotgun, and about 10 variants of a pipe gun. I'll tell you what, you can customize the crap out of those pipe guns, but they look ridiculous. The damage they deal is insulting. However, I can't help but feel this is the main weapon of the game, considering every npc and their best friend has one

Fortunately, I stumbled upon a decent gun early on in the game. The Gamma Gun. Dishes out 110 Damage. Was so glad I found it, 'cause I was getting frustrated with the stupid 10mm pistol and pipe guns too. Can find it here if you're interested (bottom left-hand corner of the map): s4.postimg.org... You pick it up from a corpse in one of the domes. The place is slightly radiated, and there's a Deathclaw lurking nearby. Make sure you have a few RAD-X's, and just sneak around undetected to avoid the Deathclaw, until he eventually wanders off. Good luck.

Have played 6 hours of this game, and it feels like I haven't accomplished anything lol. Just so damn massive. Having fun exploring before getting into main quests.
edit on 13-11-2015 by Kromlech because: (no reason given)

posted on Nov, 14 2015 @ 05:45 AM
link
Really was looking forward to this but I am on a dongle and have to pay monthly for a limited amount of broadband usage.
I just read that even if you buy the retail DVD you still have to download nearly 20 gigabytes of date from steam, 20 gigabytes.

Of course I am on a PC so maybe I will bite the bullet and get a PS4 at some point, it is far superior in spec's than my PC anyway.

Now if it was 2 gig's fine but 20 gig's, my wallet is already enough of a wasteland.

find some free wifi and bogart that bitch!