page: 1
27
log in
join
share:
theantediluvian
+9 more
posted on Nov, 12 2015 @ 01:44 PM
link
As many of you already know, I run a news aggregator that filters feeds from hundreds of sources, extracting news articles, blog post and the like relating to all sorts of mysterious phenomena, interesting discoveries in archaeology and science and general weird news. Needless to say, I come across a lot of interesting, often off-beat content.

Today I present a few such interesting items that showed up in the feed today. Any of these might have been worthy of its own thread but I decided to save a little time and space and post them together. 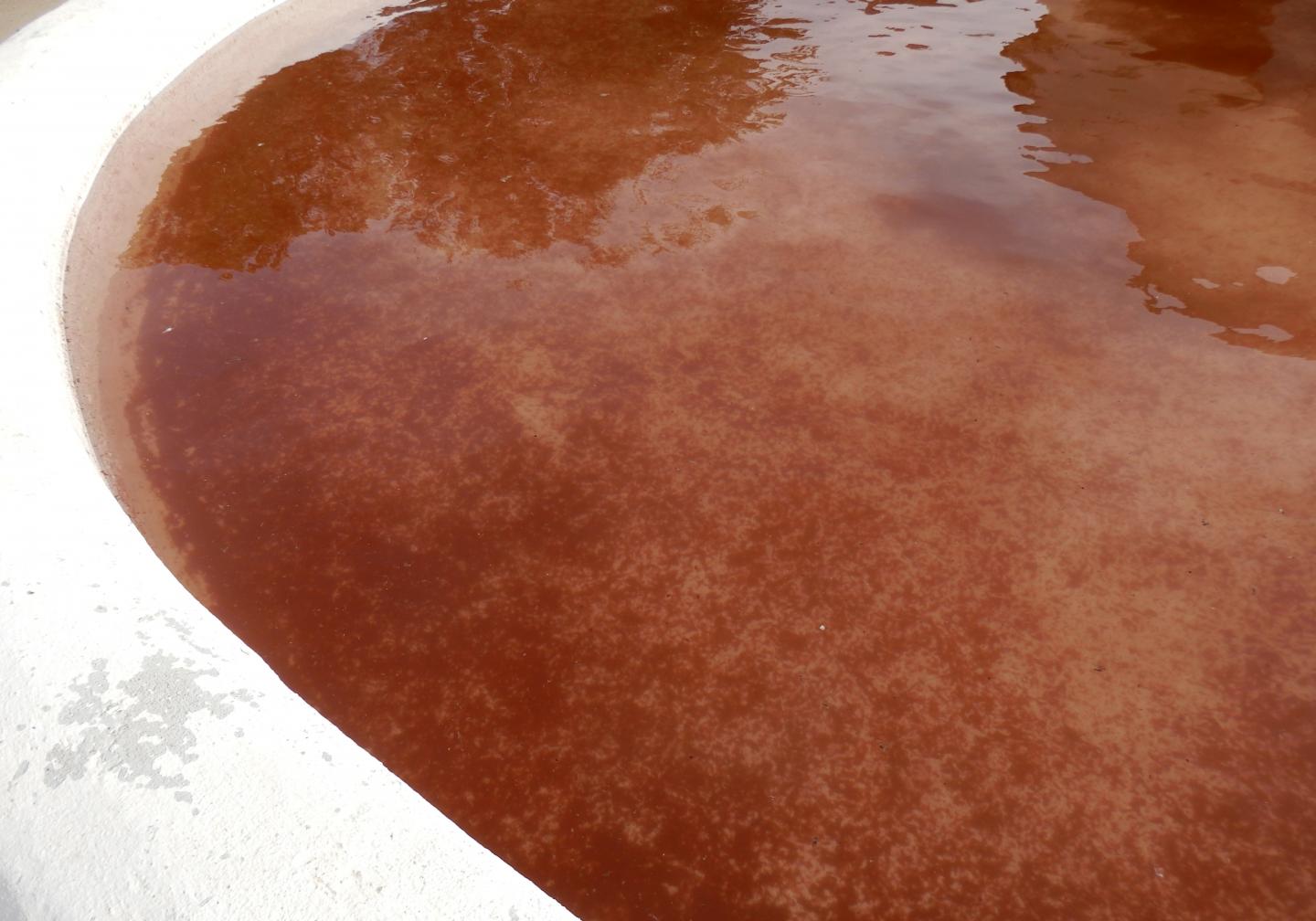 The rainwater that fell in some of the villages of Zamora (Spain) last autumn brought along a strange traveller: a green microalgae that turns a reddish colour when in a state of stress. Once this microalgae was deposited into fountains and tanks it wasn't long before the water turned red. Researchers from the University of Salamanca have shone light on this 'blood rain' phenomenon, yet they have not yet been able to identify the mysterious origin of these little algae which are also present in the pharmaceutical, food and even automotive industries.

The algae responsible is Haematococcus pluvialis, which is normally green but produces a red carotene pigment when stressed. Blood rain explained? Well not quite, the mystery here is where the algae is coming from. Haematococcus pluvialis isn't found anywhere near the village of Ayoó de Vidriales and may even have been carried on the winds from as far as North America. 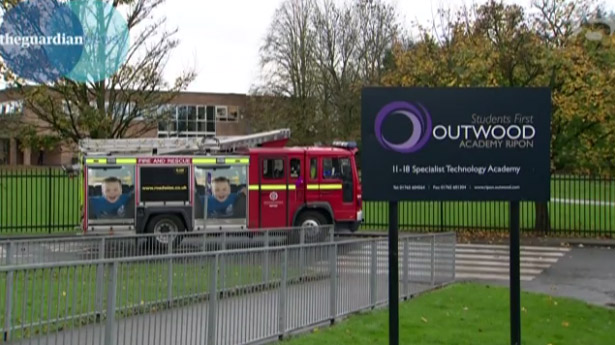 Ambulance crews have treated 40 pupils at a school in Yorkshire after several collapsed during an assembly, prompting what fire crews believe was a “ripple effect” of anxiety-based nausea and faintness.

Fire service specialists said they had found no hazardous substances at Outwood academy in Ripon, North Yorkshire, and the mystery mass illness could have been caused when four pupils fainted in an over-warm assembly hall during a Remembrance Day service.


Another student, who asked not to be named, said several students collapsed in the school hall. She said: “When the first boy was sick, we thought it was a one-off but then there was a big slap on the floor and someone had fainted. After that it was a bit of a domino effect, another three or four collapsed and then people started leaving the hall to get fresh air. One of the boys who fell was a bit concussed and had a big lump on his head. After that they ushered us out quickly and a couple of girls had panic attacks.”

Mass hysteria? Sounds plausible. History is chock full of some very strange cases of mass hysteria (or at least suspected mass hysteria) and in recent months, there's been some noteworthy incidence among school children from the 'Charlie Charlie Charlie' game to a mass exorcism in Poland at a 3-day religious camp.

The Guardian article also mentions another hypothesis involving a now banned pesticide that was sprayed on nearby fields and has been circumstantially linked to another incident of mass hysteria among children in the UK which occurred in 1980.

NEW YORK, Nov. 12 (UPI) -- A New York City Council member is proposing the city's trees get their own email addresses as a means of "deepening public engagement with trees."

Mark Levine, who represents District 7 on the Upper West Side, is proposing 200 trees in the city receive their own individual email addresses, which would be listed on signs posted "on or near" the trees.


A spokesman said the email addresses would be for more than just reporting maintenance issues.

"This is not meant to serve as a maintenance hotline so much as a mechanism for deepening public engagement with the trees," spokesman Tyrone Stevens told Gothamist.

One reason for the email addresses (which the trees of course wouldn't be checking or responding to...yet) is to report maintenance issues such as broken and hanging branches but as a secondary benefit, they cite a deepening engagement. Sounds strange? Well it is a little strange but there's a precedent as some trees in Melbourne, Australia already have email addresses and receive emails like this example from the article:

I hope you like living at St. Mary's. Most of the time I like it too. I have exams coming up and I should be busy studying. You do not have exams because you are a tree. I don't think that there is much more to talk about as we don't have a lot in common, you being a tree and such. But I'm glad we're in this together.

A wonderful sentiment not expressed often enough. We are in this together (apparently, even the trees).

Final note, if I've said it once, I've said it a dozen times, ATS could use a few strange subject matter forums or at least a general catchall forum!

What an interesting thread - thanks for putting this together and sharing with us.

I wonder about the size of these algae spores - they must be smaller than an H2O molecule since they would've had to travel with evaporating water in order to mix in with the rainfall.

P.S. I also agree we need a Strange Subject Matter forum - "Other Current Events" seems a bit too broad

The ATS of old used to be filled with stories of high strangeness. I miss those days.

I thank you once again for sifting through the interwebs to bring great material to ATS.

posted on Nov, 12 2015 @ 02:09 PM
link
a reply to: theantediluvian
To me, threads like yours here are what makes ATS great. Thanks for the time and effort

The blood rain peaked my interest seeing that there is no local reasoning for it to exist. I will spend some time researching this.

A couple years ago we had a local case that was determined to be mass hysteria. It was very odd indeed.

(CBS) Why did 12 teens from the same town in upstate N.Y. all begin to experience odd symptoms at once? Doctors say it's an outbreak of mass hysteria.

Last fall, 12 teenage girls from LeRoy Junior-Senior High School - located in a town about an hour outside of Buffalo, N.Y. - began to show symptoms similar to those of Tourette's syndrome, including painful shaking and jerking their necks, Gothamist reported.

Doctors were initially baffled. The condition was so bad for at least one of the girls that she has yet to return to school. School and state officials investigated the outbreak and school building for several months, and concluded no known environmental substances or infectious agents were found that could have caused the symptoms in the teens.

"We have conclusively ruled out any form of infection or communicable disease and there's no evidence of any environmental factor,'' Dr. Gregory Young of the New York Department of Health told MSNBC.
.

As far as the tree email, I get the feel good aspect of it, but I wish people would put this type of energy into maybe helping the homeless, or perhaps getting involved with societal issues such as reining in our out of control military industrial complex.
But hey, at least they aren't out spreading ignorant bigotry in some stupid campaign to force their views on the masses

Maybe the algae was picked up by a remote tornado or waterspout and cast into the atmosphere to be delivered by high upper winds.

posted on Nov, 12 2015 @ 03:05 PM
link
I have a problem with the emails for trees. I mean the reporting problems is a good idea, but how about going outside and engaging the tree? The tree would appreciate it.

Yes, a Fortean News forum would be dandy... but please keep posting until then, heh...

and those 'mass hysteria' labels are fairly meaningless... I suspect it's another on the long list of "stuff we just don't know much about yet."

You actively post more threads than Scott Creighton.
Maybe there should be a theantediluvian category instead.
Your stuff covers all bases and your threads are all top notch.

posted on Nov, 12 2015 @ 05:25 PM
link
Thanks everyone for the kind words. I enjoy sharing interesting things I read about and discussing them with you all and I'd be more than happy to actively contribute to one or more forums for a variety of mysterious subject matter.
edit on 2015-11-12 by theantediluvian because: (no reason given)

originally posted by: theantediluvian
Thanks everyone for the kind words. I enjoy sharing interesting things I read about and discussing them with you all and I'd be more than happy to actively contribute to one or more forums for a variety of mysterious subject matter.

Don't thank us. You're the one doing the heavy lifting, sorting through all of the chaff.

posted on Nov, 12 2015 @ 06:37 PM
link
The red rain sounds like someone's doing a massive cleansing. And they're calling it "microalgae"? Nice euphemism they used. I betcha is more like a member of the microparasite family. The hysteria could be the result of air/waterbourne microparasites causing neurological affliction. The siting of that red ooze in Scandinavia could be connected. It also could have been an accidental ejection of parasitic material during a spiritual manifestation. I know the clouds could get a faint, red pigment.

Trees do recycle human waste. Maybe, indirectly they are the answer to potential issues.

cool thread!!! the red rain caught my eye I like these kind of stories, keep up the good work

i dislike your aggregator for probably a dumb reason but, i strongly dislike that i cannot right click ANY link on your site, i can only left click it to open in new tab, some things id rather right click to open in new window, or various other context menu options i like to use,

the fact you remove the right click a link function makes me avoid your site, and likewise all other clickbait style websites that so often remove the context menu or limit right click functions.

perhaps its done out of interest for mobile functionality, in which case it comes off as cheap to force desktop users to see it the same way,