AAAAAAAAAH !!!! Now I don't know how to respond !!! As I was about to type, literally push on key, I watched a Lady Bug dive bomb, head first into my just made coffee !!! What are the chances ?

Edit: Ok, now I'm freaked out. I was about to say, that to me, there is nothing outside of our CREATOR. I don't think like you, as I feel we are all part and parcel of GOD. It's none of my business to question why this person is doing this, or this part of GOD is doing that. If no one is hurt, it's not my business. I do what I think is right and I let everyone else figure out their life paths on their own. Everyone has the right to feel and act as they wish. Why focus outwardly on things that may not concern you, personally? I don't see the logic in it, that's all, but that's just me. I respond not to direct you, but because I felt compelled to offer a different perspective. Best Wishes.

You complain when people question the existence of god or say they don't believe in it, yet you require us to say that you are right and atheists are wrong. I'll leave you alone if you do the same.

Why do religious people think I'm mad at god? How can I be mad at something I think does not exist? Its like telling me I'm mad at Santa Claus because I don't believe in him either!!


They claim the bible is full or error yet use it to claim our faith is wrong.

By showing the errors and the illogical outcomes they show not that your faith is wrong but that it is misguided - from there one builds a picture that staunch fundamentalists lead many astray. Whats illogical about that, that you find hard to accept?

originally posted by: Ladybug201
Can everybody feel their ascension to the fifth dimension?

I doubt it.I think sensitivity and each's unique spot in their journey influences this.

All I feel in this thread is arrogance and over realized self-importance.

I don't mock people who believe in god. They have every right to their belief. MY belief is that we are just a smart tool making species of mammals.

I will defend your right to your beliefs and I hope that you would do the same. 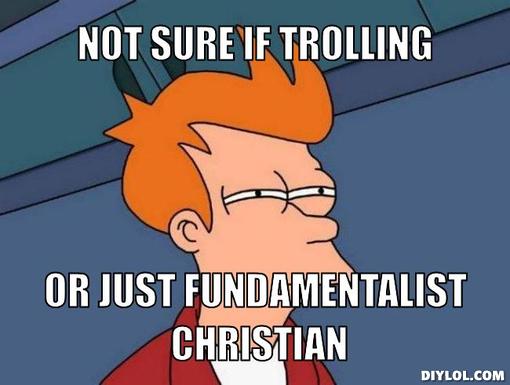 Do you believe in the existence of this god?

Honestly. Do you believe Ganesha and Anubis truly, objectively, exist?

Which is absolutely no different than what we are doing with your god.

They use the bible to mock believers.


The Bible makes a mockery of itself.

Since a disbeliever has no faith, how would he/she know anything about it?


That makes zero sense. You might know a little about Hinduism or Egyptian mythology but that doesn't necessarily mean you have faith those gods and those religions are real. We can know what's in scripture and not have faith in it. Are you being serious?...

These atheists also claim religious people/people of faith are stupid.


I think smart people can hold stupid beliefs. Happens all the time.

Believe in GOD or don't, it's your choice. I don't believe that GOD would hold HIMSELF / HERSELF / ITSELF / YOU accountable, so nobody perishes, EVER !!

Think what you will and do as you will, because it doesn't matter. Nobody will ever be punished, nor will they perish. A vessel that dies doesn't take you with it. You aren't a "body" and the body you use isn't yours, we just borrow the bodies to help us learn. We are here to learn, period.

originally posted by: Ladybug201
If you like it or not, as I see it religion is what makes atheists atheists.

If you like it or not, religious rhetoric such as yours is what drives people away from the church and god!

I'm not entirely sure what you meant by that. Here's a quote anyways:

“In fact, "atheism" is a term that should not even exist. No one ever needs to identify himself as a "non-astrologer" or a "non-alchemist." We do not have words for people who doubt that Elvis is still alive or that aliens have traversed the galaxy only to molest ranchers and their cattle. Atheism is nothing more than the noises reasonable people make in the presence of unjustified religious beliefs.” ~Sam Harris

I noticed you're trying to inflict harm with your pointed arrows, or do I misinterpretate your posts?

we just borrow the bodies to help us learn. We are here to learn, period

If after two millennia, we still haven't learned not to kill each other because of what some man made book states, then there is no hope!

Believe in GOD or don't, it's your choice. I don't believe that GOD would hold HIMSELF / HERSELF / ITSELF / YOU accountable, so nobody perishes, EVER !!

Unfortunately, you are in the minority with this way of thinking. Only this week some Christian Fundamentalist called for all LGBT folk in the USA to be put to death. The same meeting that was attended by three Republican presidential candidates — Ted Cruz, Mike Huckabee, and Bobby Jindal.

Instead of normal peace loving christians bothering about Atheists, deal with the fundamentalist within your religion as they are causing more harm in the name of Christianity than any atheist can ever do.

originally posted by: Ladybug201
a reply to: flammadraco

I noticed you're trying to inflict harm with your pointed arrows, or do I misinterpretate your posts?

No, you've misinterpretate my posts but its ok, I accept that some folk have issues and see things that are not there.

originally posted by: Ladybug201
First of all, I don't believe there are people who don't believe in the existence of god. I believe they lie when they say they don't believe god exists. The thing here is they just might not worship him. Big difference.

Second. They use the bible to mock believers. I've seen it before. They claim the bible is full or error yet use it to claim our faith is wrong.

Disbelievers aren't disbelievers when they don't mock the ones with faith. Since a disbeliever has no faith, how would he/she know anything about it? The bible maybe, if what's written in the bible is true ofcourse.

There are those disbelievers, mostly those claiming to be "atheist" who desperatly cling to science to create the illusion of superiority. Superior in knowledge. They strongly defend what science comes up with to the teeth sometimes without even knowing what they are fed is actually true. How many times hasn't science changed it views on things, yet they continue clinging to every new thing science comes up with as it being the truth.

These atheists also claim religious people/people of faith are stupid. My conviction is mockers are stupid.

Atheism, for as far as it is real.


Is this just trolling?


how hard is it really to not believe in God, as by biblical definition heshe is just there with no proof other than the faith that heshe created everything around us.. would it not stand to reason then that someone could have faith in the fact heshe didnt believe based on what evidence they have decided to be factual?

i would imagine what you actually mean (which is totally fine) is that when people question God's existence it creates fear and doubt in your mind, that is totally human, if you cant absolutely prove something then it is open to interpretation.

with regards to the bible, as you were not present in the writing of it, and as you know from the ACTUAL BIBLE that the stories were written by many different people some of which had never ever met or even lived within a generation of jesus, then you know it has been translated or changed by numerous people to the common bible versions which exists today it is more than reasonable to presume that even if the bible was information about Jesus's life and the old testament about actual god stories that those very stories will not be true to the original form. as such one would expect it to hold some falsehoods?

originally posted by: Ladybug201
... as I see it religion is what makes atheists atheists.

There's something we can agree on. My 30 years of study of religion (Christianity) directly contributed to my eventual opinions about religion and the likelihood of the existence of gods. I don't really care what you believe, but I support your right to believe it.

originally posted by: Ladybug201
I noticed you're trying to inflict harm with your pointed arrows

Isn't that what you are TRYING to do with this thread???