NANCHANG, Nov. 6 (Xinhua) -- The work of the archeologist holds an almost inexplicable romance for many lay folks, but Li Xiaobin's job, admirable as it is, holds very little glamour.

Since August, crouched on a wooden board balanced precariously over a tomb bed 9 meters below, Li has spent about six hours every day meticulously counting his way through 10 tonnes of bronze coins.

The Wuzhu bronze coins were unearthed in the most complete Western Han Dynasty (206 B.C.- 25 A.D.) cemetery ever discovered in China.

Chinese archeologists announced Wednesday the discovery of the Haihunhou cemetery near Nanchang, capital of east China's Jiangxi Province. It covers some 40,000 square meters with eight tombs and a chariot burial site with walls that stretch for almost 900 meters.

The bronze coins together with more than 10,000 other gold, bronze and iron items, have been unearthed along with jade articles, wood tablets and bamboo slips.

The coins, which are round with a square hole in the center, were strung in groups of 1,000 on a hemp strings. According to the article, it's believed 10 such strands of 1,000 would be equivalent to 250 grams of gold or one "Jin." At the time these coins were in use, the wealth of an average "middle-class" family is estimated to have been about 10 Jin. The coins come from the reigns of three Han Dynasty emperors; Emperor Wu, Emperor Zhao and Emperor Xuan.

Here's a picture that Scrooge McDuck would be proud of (source: Xinhua Twitter feed): 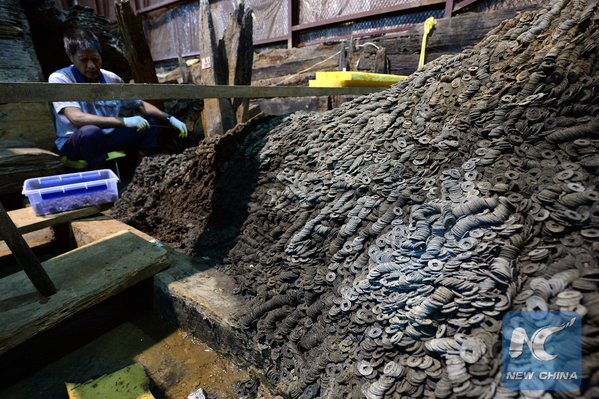 so the emperors wanted to be buried with their coins? or were they abandoned? I'm a little confused based on the article's wording

From the reading of the article, these appear to be a part of the grave goods of one of the eight tombs.

thanks for answering me back - it's cool the strings of 1,000 coins were found on hemp rope - it seems to be making a small comeback in industrial uses again here in the West.


Archeologists suspect that the main tomb is that of Liu He, grandson of Emperor Wu. Liu was given the title "Haihunhou" (Marquis of Haihun) when he was deposed as emperor after only 27 days, dethroned by the royal clan because of his lack of talent and morals

^ Liu He sounds like most politicians today! Some things never change I guess

posted on Nov, 11 2015 @ 02:09 PM
link
Wow, that's quite the find! Now how do these things work? Does the archeologist make a fortune or does it go to the Country or does he get a portion of the worth or what?

They are in China, take a wild guess

The coins at least are pretty much worthless.

originally posted by: nOraKat
a reply to: Night Star

The coins at least are pretty much worthless.

This. If there were only a few it would be a different story, But their looks to be millions of them, That makes them worthless to everyone except museums and historians, And of course, Scrap gold.
edit on 11-11-2015 by Tjoran because: (no reason given)

This proves you CAN take it with you!
Think of all of the poor people this would have fed if he would have had it handed out in his name to be remembered by instead

Today I watched OakIsland the first episode of the 3rd season. In there are two brothers who claim to have the technology to analyse the ground from space with a certain ground penetrating radar..of sorts. They can determine if there is Gold, Silver, Wood, Diamomds, Bronze...etc, etc..

If such technology excists it is as easy as pie to make such great finds as these ancient coins. Personally I am a bit skeptic about this ability but if true we can expect some crazy interesting finds by archeologist in the near future.

posted on Nov, 11 2015 @ 03:46 PM
link
Like I ask myself (and others) when something like this happens, how many years have to pass before grave robbing becomes archeology? In a thousand years is Abe Lincoln going to be dug up and exhibited in some Egyptian exhibit hall? Five hundred years? I dunno.

The coins are barely scrap metal. They're Bronze.

Bronze is an alloy consisting primarily of copper, commonly with about 12% tin and often with the addition of other metals (such as aluminium, manganese, nickel or zinc) and sometimes non-metals or metalloids such as arsenic, phosphorus or silicon. These additions produce a range of alloys that may be harder than copper alone, or have other useful properties, such as stiffness, ductility or machinability. The historical period where the archeological record contains many bronze artifacts is known as the Bronze Age.

I don't have a source, but I'm told that bronze can also contain a fair bit of lead and still qualify as bronze if it's from pre 1900's.

so the emperors wanted to be buried with their coins? or were they abandoned? I'm a little confused based on the article's wording

Maybe this was how they got rid of bad emperors in those days.

Bury them alive in tons of bronze coins.

Altogether they're worth about $50k scrap value.

originally posted by: proob4
How many people would like to own a 2000 year old coin, sell them on ebay for $5 a pop and you are looking at a goldmine there.

Why trade something of value for some worthless dollars?

posted on Nov, 11 2015 @ 08:32 PM
link
These coins aren't worthless. They're estimating that there are about 2 million coins. Depending on the coin, the value will be anywhere from a couple bucks to maybe as much as a hundred. I'd guess the average value at $3-4 a piece, that's still $6-$8 million dollars for 10 tons of metal. That's also about $300 a pound or 50% more than a pound of silver is going for today.

Bronze can be any number of alloys containing copper and usually tin. Current prices of copper and tin are about $2.25 and $9 per lb respectively. There's a cost associated with extracting the various constituents as well. The scrap value would be exponentially less than the wholesale price as ancient Chinese coins. It's the same story with a lot of the most common of the ancient Roman coins of comparable ages.

Found some more details and pictures in a Daily Mail article:

Chinese people started using coins as currency around 1,200 BC, where instead of trading small farming implements and knives, they would melt them down into small round objects and then turn them back into knives and farm implements when needed.

It meant early coins were known as 'knife money' or 'tool money', and as people began to rely on them more for commerce they were replaced by copper coins which were of a very low value and often had holes in the middle.
The hole meant the coins could be strung together to create larger denominations, with typically around 1,000 coins on a single string being worth one tael of pure silver. 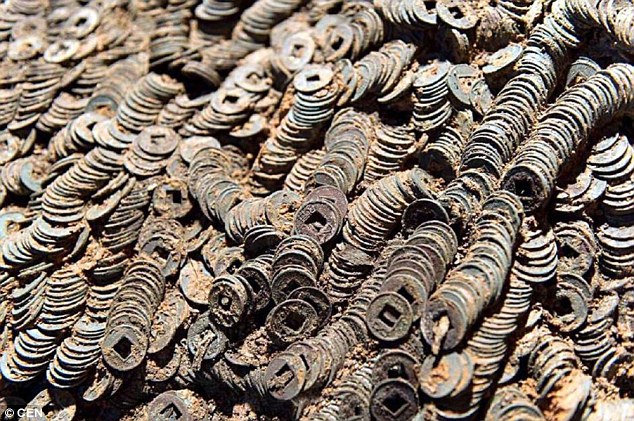 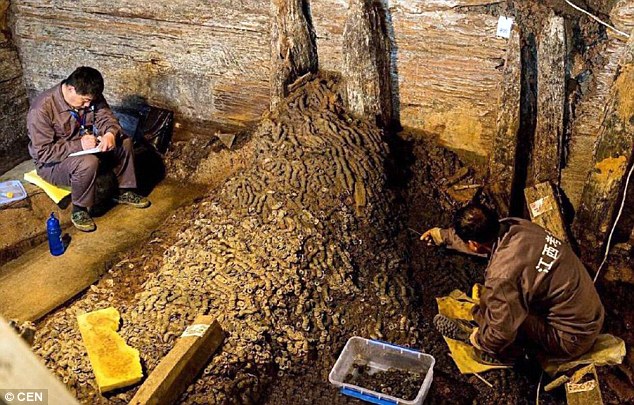 They're estimating the face value of the coins to have been the equivalent of about $157,340 (£104,060) today. They're still looking for evidence pointing to the identity of the occupant of the tomb.

The history of Chinese coins is actually pretty interesting. They've dated the tomb to around 206 BC and it seems at that point, it's estimated that a couple hundred millions coins were being produced annually. These round coins would have been in circulation along with spade money and knife money.(image scoure) 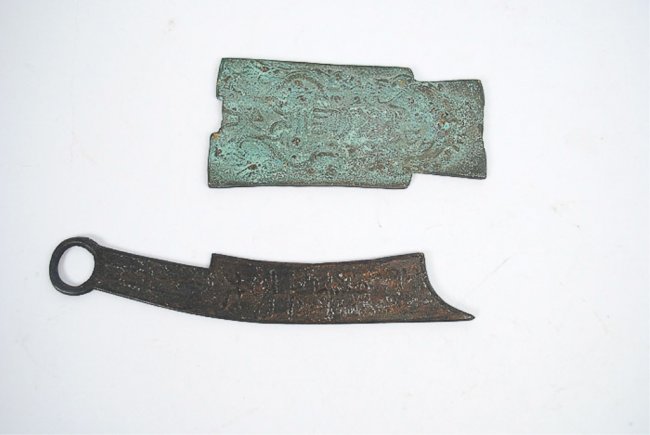 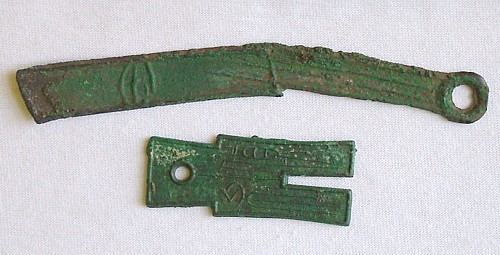 Just a semi-Internet-educated guess, but I imagine that after everything is cataloged, they'll probably set aside some for display at museums along with the artifacts and then many many more of them will be sold. Though according to this 2009 article from numismaster.com, there's a law against exporting coins from China that were in circulation prior to 1911 and the authorities there have been (or had been at least) trying to do a better job of enforcement.


originally posted by: proob4
How many people would like to own a 2000 year old coin, sell them on ebay for $5 a pop and you are looking at a goldmine there.

Why trade something of value for some worthless dollars?