Move aside, Sedna and 2012 VP113. There's a new most distant object in our solar system, and it strengthens the hypothetical case for an unseen large planet at the outer boundaries of our solar system.

The object, V774104​, was announced today at the American Astronomical Society's Division for Planetary Sciences meeting in National Harbor, Maryland. Scott Sheppard of the Carnegie Institute characterized the potential planet as between 300 and 600 miles in diameter, on par with a medium-sized moon. This makes it a likely dwarf planet, as it's roughly the size of Ceres in the Asteroid Belt.

At 103 astronomical units out (or 103 times the distance of the sun to the Earth), this is the most distant object ever recorded, besting Eris, Sedna, and 2012 VP113. It also adds on to a case built on the discovery of the latter, whose unusual orbit points to the tug of a distant planetary-mass object. Though previous surveys have ruled out anything above the size of Saturn, there still could be a Neptune-sized world or a super-Earth (or even two) farther out, too dark and distant to detect. For now, though, this is just speculation that can't be ruled out. There's also the possibility that the objects were tugged into their present orbits by a passing star around the time of the formation of the solar system.

Pretty straight forward... A body located at over 100 AU's. Do we think planet X / small star is still waiting to be found or are we dealing with a routine scenario that is just new to us?

Personally I think something, star or planet, is out there..

For there to be a brown dwarf out there in our solar system is not really walking the limb like calling Mothman the cause of a certain bridge collapse.
But... then again, who knows? Maybe he did.
Anyway...
We just ain't that smart yet. We do NOT know everything. If such a body should exist, it would not be, or should not be that surprising.

it sounds too small to be a brown dwarf redoubt - the article said 300-600 miles in diameter. I have heard a lot about there being a supposed brown dwarf though (could be a separate object), since that is one object that could have the mass to affect the orbit of other objects

The implication is that there is possibly a larger undiscovered object 'further out' that is disturbing the orbits of these very distant 'planetessimal' objects.

Also, a large enough object, that far out, would seem to be in defiance of orbital stability calculations. Definitely, the forces holding it in orbit would be extremely tenuous and the slightest disruption would be likely to make it more of a captured interstellar wanderer than a solar system object.

If they find something out past the heliopause, as this might suggest, could it even be considered part of the solar system?

Am it completely wrong here.
And why isn't this a nasa announcement.
Do they just stay away from anything that would encourage planet X crack heads?

Well I was wrong....yet there isn't an agreement on the size of the solar system from any source on the internet. So what's the agreed size on ats?
edit on 11-11-2015 by rossacus because: (no reason given)

Well that does it, throws papers up in the air....


Now we'll look like the laughing stock of our Galactic neighbors when they recover our deep space probes.

Dark matter is the most abundant stuff out there not Hydrogen and now we live in a 9 possibly 10 planet solar system, 11 if Pluto got it's planet hood status that it was robbed of back!


And the Naked ape clicks the reply tab

Am it completely wrong here.
And why isn't this a nasa announcement.
Do they just stay away from anything that would encourage planet X crack heads?


Close. Ish. Sun to Pluto is 39.5au.
Plutos perihelion is 29.7au (closest point to the sun during its orbit)
Plutos aphelion is 49.3au.
So Plutos average distance (or semi-major axis) is 39.5au.

Based on that, this planet is between 2 times and 3 times the distance from the Sun as Pluto.

Not exactly what I'd call close or even a threat in our solar system.

posted on Nov, 11 2015 @ 02:59 PM
link
Nice read. It's out there...Planet X exists. Here is the problem...Planet X has gotten a bad name because of all the doom and gloom it got for 2012. It's not going to come crashing our party and wreaking havoc on our solar system. I find it oddly coincidental that this was released just a few weeks after this was released:


It may seem like something from an interplanetary chess game.
Astrophysicists at the University of Toronto have found a close encounter with Jupiter may have ejected another planet from the solar system, around four billion years ago.
It was first proposed in 2011 that a fifth giant gas planet orbited the sun at the time of the solar system's formation but it is only now that experts have proposed how it was pushed out

posted on Nov, 11 2015 @ 04:00 PM
link
a reply to: TerryDon79
Cheers for that. I thought they taught the solar system is double the distance of Pluto but now it's over triple. Strange.

posted on Nov, 11 2015 @ 04:03 PM
link
a reply to: HawkeyeNation
I saw that but isn't that theory endorsed by a nibiru believer, trying to justify it's existence. The model they proposed was far fetched.

originally posted by: rossacus
And why isn't this a nasa announcement.
Do they just stay away from anything that would encourage planet X crack heads?


NASA is no the be-all and end-all of space science that some people seem to think it is.

Most observatories and the astronomers who work at them are not directly affiliated with NASA. Usually they are funded by universities, sometimes with grants from the National Science Foundation.

Pluto should be a planet, dammit!

Obviously, my point being it hasn't been scientifically proven otherwise nasa would validate the findings. Don't want smaller scientific communities to undermine nasa and announce true findings . Could be damaging to NASA'S image as pioneers.


Planet X has gotten a bad name because of all the doom and gloom it got for 2012. It's not going to come crashing our party and wreaking havoc on our solar system

So what is Planet X going to do? Just stroll on by, a parade wave, a few bits of harmless confetti strewn heither and yon, then make an unimpressive exit from our solar sytem?


Planet X has gotten a bad name because of all the doom and gloom it got for 2012. It's not going to come crashing our party and wreaking havoc on our solar system

So what is Planet X going to do? Just stroll on by, a parade wave, a few bits of harmless confetti strewn heither and yon, then make an unimpressive exit from our solar sytem?


It's going to do nothing. It's going to stay it's course, which is not the narrow elliptical route that has been portrayed. So I guess you could say it just does a parade wave.

Does its course include a broad eliplical course then? And zero influence or causation of disturbance to existing or known objects in our solar system?

Does its course include a broad eliplical course then? And zero influence or causation of disturbance to existing or known objects in our solar system?

It would have to be elliptical. Circular orbit would never get close to the Sun, parabolic orbit would just be a one off.
It could whizz in and out past the Sun every now and again, while spend thousand years or more out in deep space. Pluto has an orbit of 248 years. If planet X is n the same plane as the other planets, it's orbital parameters would have to be a harmonic of Neptune and Pluto. 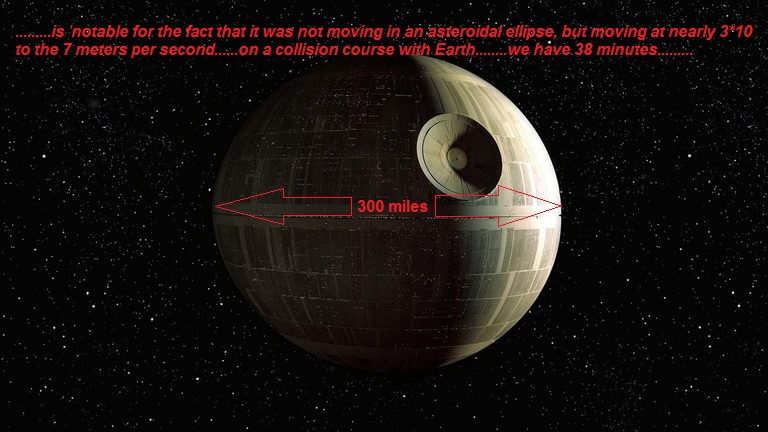 Interesting Article! Thanx for the share here. Hmmm, now When will they show some pics? Or are there some of this object somewhere online that we can see?...


Interesting all these newly found planets, objects on the heels of a NASA spokesman's recent statement (paraphrasing) "There is no conclusive evidence of the existence of Planet X".