Who Do You Think Won/Lost The 4th Republican Debate?

posted on Nov, 11 2015 @ 08:57 AM
link
Personally, I thought last night's Republican debate was the most substantive thus far. It was also the best managed and moderated (IMO).

Dr. Ben Carson is my candidate of choice, but he is not a great debater, and while he didn't hurt himself and did 'okay'...I don't believe he could be said to have won the debate.

While I wasn't thinking of him as my first choice, I really felt Ted Cruz, performed the best last night...and he would be my pick for winner of last night's debate. The exchange with Kasich over big bank bailouts spoke volumes as to his ability to command and control a one-on-one debate exchange...pushing Kasich to fumble at the end.

My choice for last night's loser is a toss up between, Bush or Kasich. Bush needed a great performance to stay relevant, and neither one delivered.

Kasich was annoying with his buttinsky approach. I thought Bush did better, Carson was ok, and Carly was underwhelming. Yawn for the Donald. Rand Paul, an annoying mosquito present in the room.

Carson for the big W 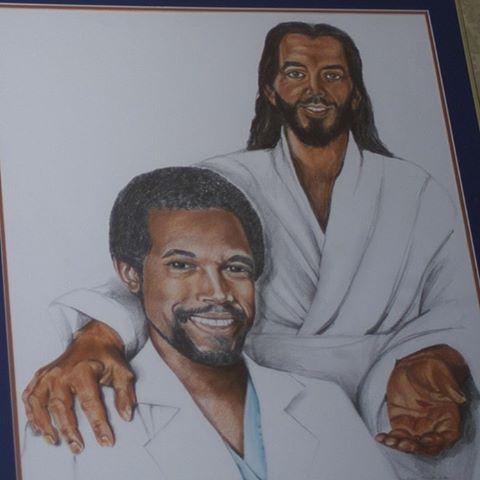 ^ "Portrait" in Ben Carson's house of Him and Jesus

Carson for the big W

^ "Portrait" in Ben Carson's house of Him and Jesus


Nice post, racist much? It's a shame so many people dislike Ben Carson because he's black.

Racist? Where in the world did you get that from?

The dinosaur stables was referring to Carson's belief that the Pyramids were used for storing grain.

The portrait of him and Jesus is just an easy target.

it's as if he doesn't hear some of the things that come out of his mouth. he thinks Joseph (from the Bible) built the Pyramids, and that they were used for storing grain. When running for POTUS I would think you would avoid such topics, Carson shamelessly proclaims his thoughts on the subject though

Why is it that the poorest conservatives vote for these asshats in the Republican Party?
Is it because they want everyone to end up as poor as they are?

He has also been targeted by the media, unfairly - but this is America. And the media (to me) spews garbage about all sorts of stuff.

The question really is WHO is behind targeting of Ben Carson?
edit on 11-11-2015 by FamCore because: (no reason given)

I thought the democratic debate wasn't until Saturday?

originally posted by: Kentuckymama
I don't think the picture was meant to be racist. To me, the picture shows a middle eastern Jesus.


On topic : It was Carson from everything everyone is saying...go Ben

In his egotistical mind he doesn't lose at anything.

One observation from the current list of presidential hopefuls.
The gop is presented as the party of fat white men yet they have a black man and a man named Marco in the running.
The dems on the other hand have a rich white woman from Arkansas of all places and a man in his 70s as front runners.
Granted the gop has a fat guy, rich man and rich woman running to but it still makes ya think.

posted on Nov, 11 2015 @ 09:44 AM
link
Kasich really upset me and why he is on the stage is a mystery. Constant interruptions and talking over people is annoying. Fiorina as well. She seems like a pent up angry woman to me. Cutting off people is not respectful to the others trying to talk.

Paul did well and seemed relaxed and articulate, as did Trump. Carson didn't really say much except maybe to borrow a page from Trumps foreign policy on taking the oil fields to destroy ISIS.

Rubio is a snark. A fast talking shoe salesman who wants everyone to believe he has it all. Like Bush, his lines are prepared in advance as was his attacks. Didn't care for it much.

All in all I think the debate did little to change anything except maybe for Cruz and Paul who like Trump and carson were the adults in the room.

I think Carson is going to lose ground. It was bad enough he wants to get rid of Medicare, now he wants to remove the mortgage tax write-off? Nothing like attacking the middle class and the elderly.

posted on Nov, 11 2015 @ 09:47 AM
link
There was no real clear winner in the debate last night. While the pundits have been squawking about how there was more meat to this debate and they really addressed the issues, in reality it was a soft-ball debate. The moderators did ask a few really good follow-up questions but otherwise it was an easy night for the candidates.

Trump got his ass handed to him on the TPP, which was hilarious.

The real important thing to take from last night was how the Right is beginning to change their rhetoric a bit. This was exemplified by the comments from Santorum after the first debate. They have realized that it is very popular to talk about working families, how they have been screwed and that it's time to focus on what's best for them, not the rich.

They are trying to tap in to the message and momentum of candidates like Sanders. Their usual rhetoric of war and big business does not sit well with many voters and so I believe they are switching modes just ever so slighlty.

No CHRISTIAN ,they hate that.

One observation from the current list of presidential hopefuls.
The gop is presented as the party of fat white men yet they have a black man and a man named Marco in the running.
The dems on the other hand have a rich white woman from Arkansas of all places and a man in his 70s as front runners.
Granted the gop has a fat guy, rich man and rich woman running to but it still makes ya think.

The GOP had a woman, two Latinos, a black, a Cuban, a billionaire, a poor Seanator who can't pay his credit card bills, a older white man, and a Bush.

posted on Nov, 11 2015 @ 09:48 AM
link
Well, I was looking for honest impressions of last night's debate...and get an immature progressive, anti-Christian and anti- Carson diatribe from a Liberal "asshat" (thanks for the word...I like it; think I'll keep using it).

To those of you, NOT filled with stupidity, hatred and ignorance...Thank you. Keep the comments coming.
edit on 11-11-2015 by IAMTAT because: (no reason given)

Thoughtful insight from the other side. Thank you.