page: 1
48
<<   2  3  4 >>
log in
join
share:
theantediluvian
+30 more
posted on Nov, 10 2015 @ 06:22 PM
link
I decided not to post about the first incident when I read about it a few days ago because there wasn't much to it and the post didn't have a link to anything but a YouTube video. Not that The Mirror is a bastion of journalistic standards but it does appear as though something might be happening here. 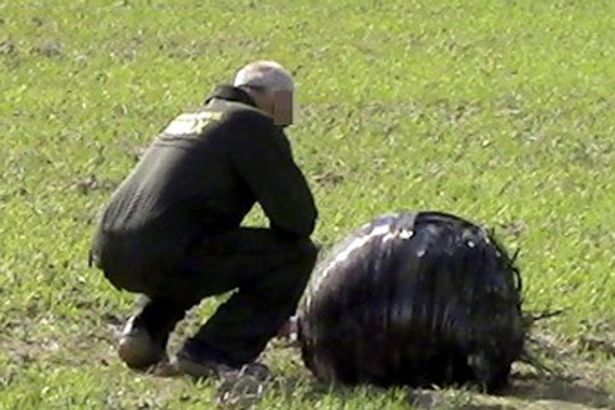 For the second time in just five days, a mystery cylindrical object weighing about 20 kilos has fallen into fields in Calasparra, an area of Murcia with 9,700 inhabitants.

On November 3rd, there was a sense of wonderment and some amusement after a huge metal ball crashed into a goat farm and was discovered by two bemused shepherds.


But yesterday villagers were stunned to find a SECOND globe had plummeted to Earth in the hamlet of Villavieja, just a stone's throw from the other site.


After the first ball was discovered on November 3, a farmer reported seeing between seven or eight fireballs first thing in the morning so it is believed there could soon be more discoveries.

Emergency services has confirmed the second spherical object is very similar to the first and is about 80 centimetres in diameter.

The Mirror article says that "it's thought" that the object is orbital debris falling to Earth but they don't say who exactly is having the thoughts or why. It looks a bit like a wasp nest if there were such things as wasps who made nests out of ribbons of black plastic. The first picture (above) is from the first incident. There's another picture showing what looks like a small crater and it's not clear if this is from the first or second: 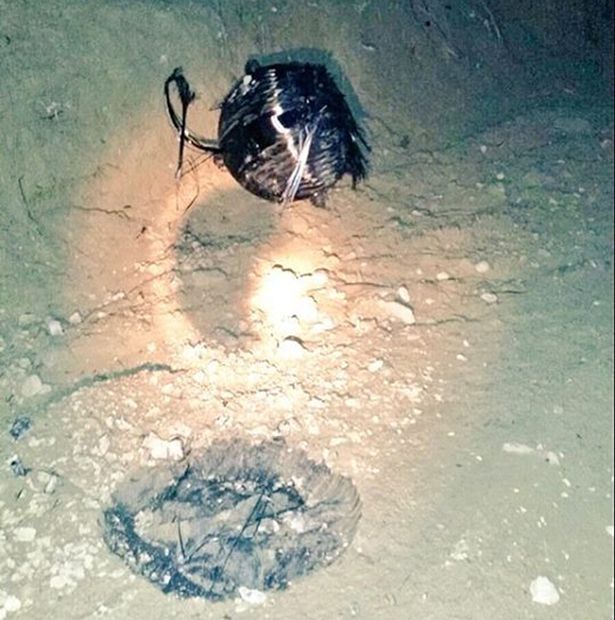 Which was found to be a tank used after a missle or satellite launch.

my guess would be "space trash" from old Apollo/Cosmonaut missions or failed satellites?

I wish there were more information on the objects - they seemed like a jumbled mess of metal and something artificial or if they think they could be natural. Based on the description and what little details we do have, I'm going to bet it is something of artificial origins 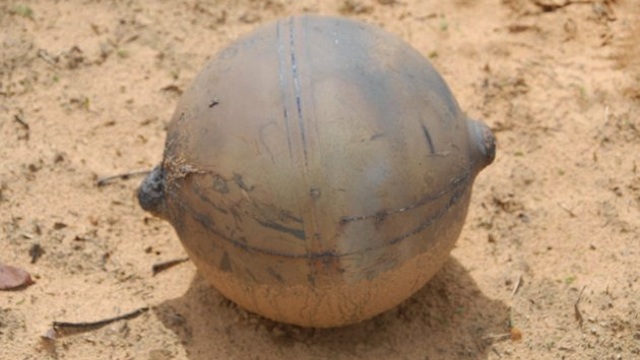 Turns out it was a 39-litre hydrazine tank. There could have been a satellite launch recently which would explain the reoccurring event. The second photo in your OP appears to show two "nubs" on either side as well, much like the used tank shown above. 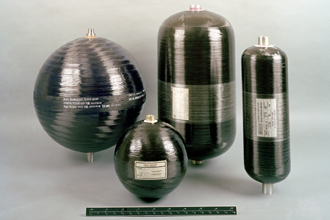 For anyone wondering what it actually is, it's likely a 39-litre hydrazine bladder tank (based on its apparent size; there are also much larger hydrazine tanks). They're used on unmanned rockets for satellite launches, which would explain why they're falling down in such a specific geographic footprint.


Here are two more examples that I found. 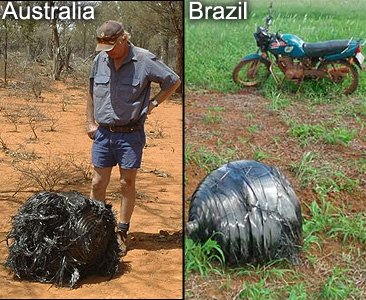 
A hunk of space junk is headed for Earth and will plunge into our planet in about two and a half weeks. Right now, scientists predict it will crash-land on Friday the 13th (of November). Technically known as WT1190F, scientists have nicknamed it WTF—as in “WTF is this?”

If those have plastic surely they should be burned unless they fell from the floating city?

posted on Nov, 10 2015 @ 06:51 PM
link
I saw this story yesterday in Daily Express but didn't post anything about because I thought I would be ridiculed because it was the Express but I did remember it said yesterday that one had also fallen in Turkey. I've just gone back to look and I was correct. So apparently the Express is now reporting it as three orbs.

HarryJoy
+4 more
posted on Nov, 10 2015 @ 07:02 PM
link
You are absolutely right about it making no sense for them to land meters apart and days apart.. I mean the odds of that must be astronomical ........ unless I'm missing something about orbital geometry.

I remember that. I was thinking along those lines, perhaps a carbon fiber storage tank of some sort? Here's two examples of carbon fiber cylinders, one after burst testing: 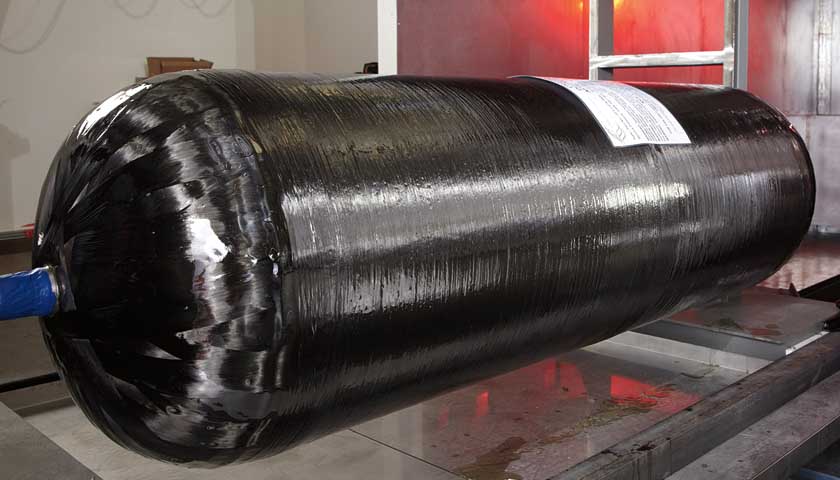 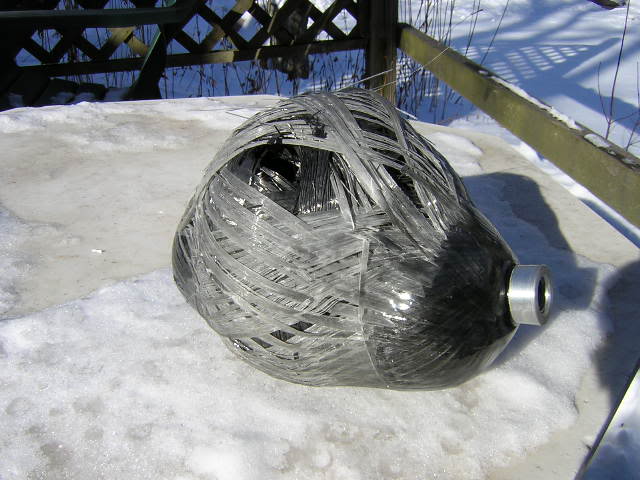 As I said in the OP though, it seems extremely unlikely that space debris would fall from orbit twice over the same spot days apart.
edit on 2015-11-10 by theantediluvian because: (no reason given)

Yep, that's almost certainly what these are though carbon fiber wasps is a much more entertaining idea. So why two of them falling over the same spot, days apart I wonder?

I can save this mystery of the big black balls from space!

I wonder if there's not something going on with the gravitational pull of one orbiting object perturbing perturbing orbit of another object? Maybe whatever mass of debris from which these tanks originated and some other object have orbital periods that are multiples of one another such that every 5 days they intersect over this spot on the Earth?
edit on 2015-11-10 by theantediluvian because: (no reason given)

posted on Nov, 10 2015 @ 08:04 PM
link
From the posted material, it doesn't make it clear they saw both fall. They could have fallen at the same time and found at different times.

There was also the Russian Salyut spacecraft that came down. And, if I recall with Salyut, there wasn't a lot of control with that one. The issue is, NASA would like to have enough fuel left, but in the case of UARS, the fuel ran out several years ago, so slowly but surely it succumbed to solar pressure and the solar activity created enough drag that we're now seeing it tumble to Earth.

My now educated guess is that there are pockets of increased solar pressure located within the orbiting path of the debris. Imagine how vertical drafts work when hang gliding. A glider can potentially stay in the air forever, provided they can "work" the draft. If the Sun's solar pressure is acting as a downdraft, similar debris following the same orbit may hit what I am speculating to be a pocket of increased downward pressure. All it took was time and A LOT of coincidence. 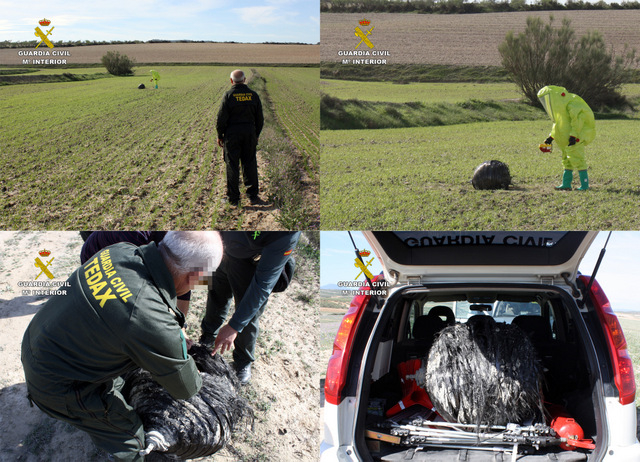 Men in green suits arrived and advised locals to keep out of the way as the Guardia Civil activated their nuclear, radiological, bacteriological and chemical protocols in order to investigate the unidentified object, but it was quickly established that the sphere posed no immediate threat to the civilian population of Mula, and although police scoured the surrounding areas to ensure there were no other objects which could pose a threat to the public the area was re-opened for passing shepherds.


LOL!!! Better safe than sorry! I was even speculating that Spain has it's own form of distraction media and wanted to create a giant buzz about nothing during a time when attention needed to be diverted.

The metallic balls are just a straw man patsy to debunk and misinform. To throw you off the scent. The pluming added to one of them was done deliberately, after the handlers swooped in.

The black, sinuous spheres are the real McCoy. When a person proficient in cleansing their chakras (energy centers) of parasites caused by Archonic plasma entities, they can collect a portion of the parasites into their energetic Third Eye manifestation and project the foreign bodies abroad. One exercise used in conjunction is Sun Gazing projection, the other as far as I am aware is through the static discharge of Plasma entities that are abundant in the atmosphere. Either way this is the result of what one looks like after it is cooked to a crisp. The chimeric, wasps nest appearance of the eyeball shape is a reflection of entangled entities at the moment of catalysis between plasma fusion and the plasmodium eukaryote.

Here's another picture of one: 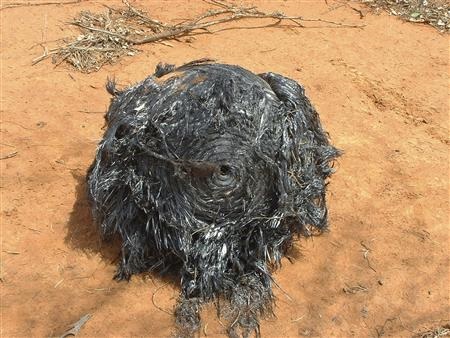 The spiral in the center is actually the lens of the 3rd eye projection.