What political idealogy is this? ( Also, we should have a QA forum! )

posted on Nov, 10 2015 @ 01:11 PM
link
So, I was thinking about where I stand politically, and I see some virtues in socialism, but at the same time America is huge, and I hardly believe one government can represent both Los Angeles and southern utah at the same time effectively - You go from far left, to far right and I was thinking.. Why can't we have a small federal government - Very small, in fact, and larger state governments that have control of how social benefits are dispersed, and even their own laws for the most part- This would give us a wide variety of ideas, states could emulate what's working, and could get rid of things that aren't. From education to law enforcement, from healthcare to drug laws, and everything inbetween - It would let us define each state individually while giving us a chance to emulate what works best. Want lower crime? Emulate governors/mayors that put in place policies that seem to be working on those fronts. Want higher graduation rates? Same idea.

I've always been for larger state governments, and a smaller fed. You can hold a governor, mayor or city councilman a lot more responsible than you can senators/congressman as well. What does ATS think?

Also, I think a Question/Answer forum should exist - No stars or flags, simply a place where people can ask questions to other ATS members without fumbling around as to where they should make their post. Polls would be awesome in that forum, too!

information and collaboration forums might contain what you are looking for - here's the link for the Board Business & Questions forum www.abovetopsecret.com... - or if you want to pose questions to individual members you can U2U them.

I agree with your perspective on smaller federal government - if that requires state government to encompass more activities/departments/etc. then I would support it, so long as there are still checks and balances and corruption can be more easily contained and deterred versus the larger, more powerful Fed.

Have you tried The Political Compass test? There are several good ones that have been linked here before. I think they're fairly accurate.

I agree to an extent - I believe the federal government should be in charge of ensuring our constitutional rights, I do not believe they should be over other issues, though. For instance I believe each county, or state should have their own say on rights concerning grey areas such as abortion, and welfare benefits. No more arguments of economics or morality - You dig your own grave, or succeed on your own as a city/county/state. Expanding local and state economies, and shrinking the feds spending power is what I would like to see.

I think it would be amazing to have forums/discussion boards and such of how different mayors and governors run their areas - We could see trends, we could gather data to form statistics on what economical decisions create the best overall circumstances - Like the best education, the lowest crime. Having the fed weigh in on these issues makes everyone the same, and in my opinion that's not how it should be - Not to mention in the field of education we are behind many other major nations.

originally posted by: deadlyhope
a reply to: Benevolent Heretic

I believe the federal government should be in charge of ensuring our constitutional rights, I do not believe they should be over other issues, though. For instance I believe each county, or state should have their own say on rights concerning grey areas such as abortion, and welfare benefits.

I agree that our federal government should be in charge of ensuring our constitutional rights, like the right to autonomy and self-determination, not to mention privacy. Therefore, a woman's right to privacy and autonomy is violated by state laws against abortion. Abortion is not a grey area in my mind. It's no one's business but mine. My personal body is mine and control of it shouldn't be put up for a vote.

It is a grey area in the nation, though. Some will argue that it is privacy, and that our constitution does cover privacy, and others will argue about the fetus being a person as well - This battle hasn't really gone anywhere in years, so I assume having to drive a few miles to the next city that does allow it would be a lot better than the fed defining it, even against the will of tens of millions, if not more.

I'm pro-choice as well, but it doesn't change how things really are in the nation.

Huh. Who'da thunk it? I lean left of center. 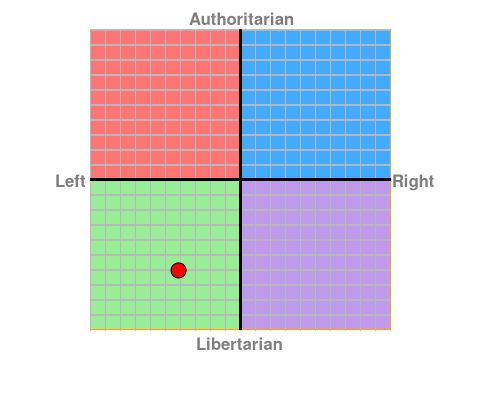 interesting, I test about 3 squares up, 1 square over. We're left-libertarians eh?

So i am a cross between Stalin and Gandhi , interesting cross . 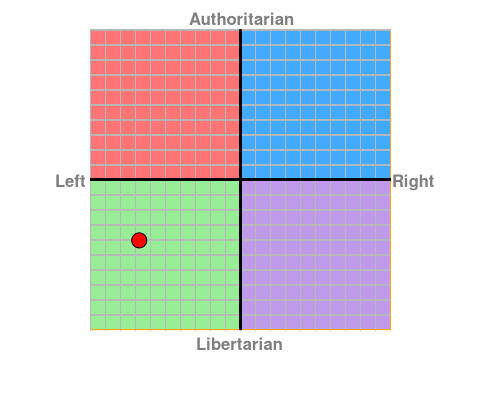 Although I have to admit, I feel like I cheated. I knew what many of the phrases were asking politically or what sources they came from.

EDIT: And heh heh heh, I notice that a few of you are left leaning as well. Even one that I was sure was a hardcore right winger (glances at a certain Texan comrade...). Come on, join my plans for a socialist utopia! Comrades, you are needed! Muahahaha!
edit on 11-11-2015 by enlightenedservant because: (no reason given)

I could have guessed. We are very much alike in our political ideology, IMO. I'm a little left of you, but the same on the libertarian scale.