posted on Nov, 9 2015 @ 03:13 PM
link
Is it possible that, to induce harmony into the subtle energy qualities of our environment, that humans could use the following:

I find this question to be absolutely fascinating.

Good stuff. I wonder why this is in Skunkworks?

Because I was under the impression that, had I put it in Science and Technology, it would be moved here.

Well they are used daily to set a path to which to see and understand harmony.

But the force beyond it surpasses them.

Simply because it is what it is, raw truth, it's really reflected everywhere....as it is what makes up this.

So if you would like definitive evidence of this I suggest computer design.

An interview with Dr Ibrahim Karim, founder of the science of BioGeometry, on A New View.

. . . Physics tell us that everything is energy, even what we consider solid matter is actually energy. All life functions are based on energy interactions. Energy interactions are the hidden dimension at the core of any perceivable physiological function. . . .

Different levels of energy interact through resonance to produce harmony. Like the strings of a piano, if we strike one then every eighth string will vibrate producing a sound but our piano here extends in both directions to span the whole universe from the smallest to the largest. . . . We are constantly affected by and in turn affect the collective vitality, emotional, and mental abstract energy levels around us. The Swiss psychologist Karl Gustav Jung has done a lot to make us aware of the effect of the collective levels on our psyche. He revived the hermetic ideas of the Gnostics of Alexandria, and the Arab philosophers and Sufis.

When two energy fields are in resonance, and exchange information, something happens after the resonance is over. The two systems do not go back to their original state. A sort of vibrational “impregnation” occurs, which means that part of the new information leaves an imprint on the energy system. Systems then, are in constant evolution through resonance or interaction. But what is exactly implied by impregnation? There is a sort of MEMORY in every energy system.

From these core concepts we will deal with holistic health as: ENERGY BALANCE on all levels internal and external to our system, individual and collective. . . .


Note the reference to the Gnostics of Alexandria, Arab philosophers, and Sufis.

posted on Nov, 11 2015 @ 01:50 PM
link
There is the book Back To a Future for Mankind: BioGeometry, which is a collection selected from lectures given and meetings attended by Dr. Karin, published in 2010.

There is an interesting diagram in the "Look-Inside" of the book on Amazon, which may suggest that alchemy is not a pseudo-science, as mainstream science would have us believe, but a real science: 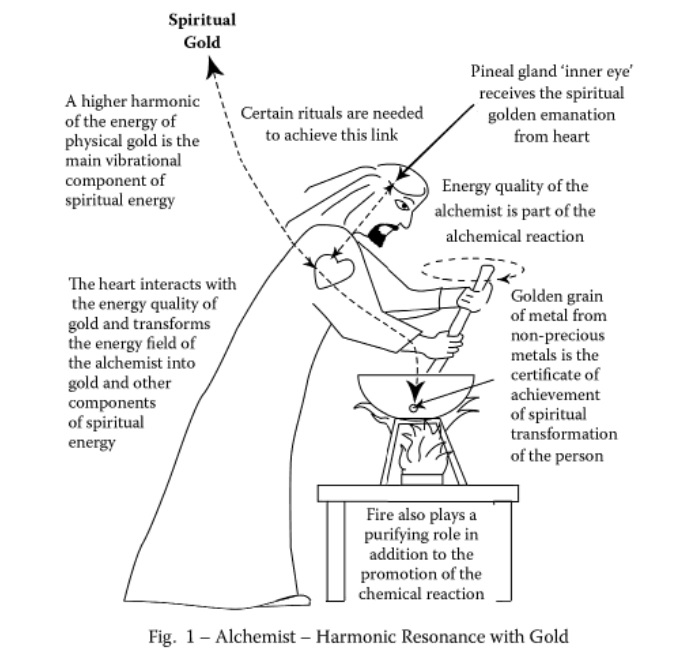 originally posted by: ConnectDots
... alchemy is not a pseudo-science, as mainstream science would have us believe, but a real science

I confess that as an engineer who is married to a physicist, my view is rather mainstream. To me key features of science include experimental, objective testing of hyphoteses. Except for the "golden grain" the rest of the features in the quoted Figure 1 are subjective.

I would like to hear what to you constitutes a science.

I don't disagree with you about what constitutes a science.

But I do believe that there is much suppressed science, and that mainstream science may be wrong on alchemy.

From what I've learned so far from Dr Karim's work, he is proving with practical applications that subtle energies do exist, and they can produce effects.

In Figure 1, I interpret the "Spiritual Gold" as literally being a higher harmonic of physical gold, and the references to the heart and pineal gland may literally be saying that alchemy is possible.

originally posted by: ConnectDots
Here is an interview of Dr. Ibrahim Karim:

An interview with Dr Ibrahim Karim, founder of the science of BioGeometry, on A New View.

For those of you who listened to the interview, and may have puzzled, as I did, about what in the world he said at 6:20?

I believe this must be it. It's also from the book Back To a Future for Mankind: BioGeometry:

originally posted by: ConnectDots
Is it possible that, to induce harmony into the subtle energy qualities of our environment . . .


As a practical matter, an example of changing an inharmonious environment to a harmonious one with subtle energy is the project that Karim worked on to harmonize electromagnetic fields (EMF) in Hemberg, Switzerland:

Electro-smog: The Miracle of Hemberg

A pilot research project under the patronage of the Swiss Mediation Authority for Mobile Communication and Environment (MAMCE), and in collaboration with leading governmental telecom provider Swisscom, implemented BioGeometry energy-quality balancing to remedy ailments of electro-sensitivity in the rural town of Hemberg. BioGeometry® was successful in eliminating the ailments of electro-sensitivity, among a number of other health conditions that it remedied, as well as positively impacting the overall ecology of the area. Media coverage, supported by official releases by the MAMCE and an independent study of the project, dubbed the results “The Miracle of Hemberg.” In a Swiss television interview with the Mayor and residents of Hemberg almost two years later (Sept. 2005), the sustained energy-quality balancing effect of BioGeometry was confirmed.

Also on that page of the website there is a link to a 47 page .pdf "Mobile Radiation in Hemberg: Harmonization with BioGeometry."

Karim calls his concepts the Physics of Quality.

There is a 4 hour video on Karim’s YouTube channel of a seminar and workshop that Karim gave in Clearwater, Florida in 2002.

The Description for it refers to the “International Bau-Biologie and Ecology Institute”:

Chinese whispers...error with equation full stop Miss understood the addition symbol and the letter t of the English alphabet.

Karim calls his concepts the Physics of Quality.

Karim uses the word "quality," but when I read what he says I think of what he's describing as being attributes rather than quality.

When he talks about the fact that our brain perceives octaves on the musical scale as being the same note repeated at the 8th, 15th, etc. interval, I don’t think of that as recognizing a similar quality. I think of quality as referring to worth. I think what the brain is perceiving when the note C, for example, is repeated up and down the scale is just its similarity, per se, which I would call a reference to its attributes.

But the important thing is that he’s saying that numbers, as in the various lengths of a stringed instrument being plucked, in turn producing frequencies, have an effect on humans, and that the same reaction to sound in the brain also takes place when the brain perceives the other four of the five senses – the effect of the frequency in question is interchangeable.

With frequency, comes resonance and harmonics, and he’s saying that higher harmonics of a given frequency, even though humans have a limit to the range of frequencies that can be perceived by the brain, can still have an effect on us in the form of subtle energy.


Here is a recent interview of Dr Karim. He begins speaking at 3:44:

originally posted by: ConnectDots
Is it possible that, to induce harmony into the subtle energy qualities of our environment, that humans could use the following:

I find this question to be absolutely fascinating.

Great thread! I have read a lot about biogeometry because of my heavy research in biomimicry.

You will likely enjoy checking out the biomimicry institutes page.