Obama's bid to save the world

If you want to rely on some numbers that the administration has provided you that's fine, has Obama thrown his weight behind real world issues like sustainable agriculture, renewable energies, etc. You have to clean up your own house before you start preaching to the world.

They changed plenty with Obamacare, but by all means keep splitting hairs and tell me that was congress that did that.


Your post makes no sense unless you were trying to make the claim that "real change" has happened under Obama because CO2 emissions were decreased.


Actually, I was quite careful to not make that claim:


Are you sure? I'm not that big a fan of the current administration but there does seem to have been a decrease in CO2 emissions.

But are you claiming that administration policies had no effect on reducing emissions in spite of the increase in economic activity subsequent to the recession? Do you think the curve would look the same without those policies?

BTW, regarding you claim about the Keystone decision:


And all of this obscured the fact that this pipeline would neither be a silver bullet for the economy, as was promised by some, nor the express lane to climate disaster proclaimed by others.

Personally, I suspect the "greenhouse gas" emissions curve looks like whatever the government funded researchers are instructed to make sure it looks like. The manipulated data issue has been proven, not really sure why so many people are still bilked into buying this nonsense.

posted on Nov, 7 2015 @ 04:54 PM
link
The environmental whackos want to tell us all how to live while typing on a keyboard made of petroleum products and using electricity that comes from coal plants, while sitting in a Starbucks drinking coffee from paper cups that come from trees. I guess if we fork our money over and buy invisible carbon credits all pollution will go away.


The manipulated data issue has been proven,


That would depend upon what you mean, exactly. And if you understand it.

LMAO, good point. Nothing says "NO!" to big oil like blocking an exploration rig from leaving the harbor using plastic kayaks. The hypocrisy is staggering at times.

Freedom has killed the planet. They must remove freedom in order to save the planet.

You'll thank them later. But only because you'll be ordered to.


Freedom has killed the planet. They must remove freedom in order to save the planet.

The planet will do just fine on its own.
How pleasant (or not) it will be to those living on it is another matter. Remember what "freedom" did to Lake Erie?
clevelandhistorical.org...-xUrY

I mean NOAA and their European contemporaries were proven to be "adjusting" their data to match their goals (not part of the scientific method as I learned it in college. God help me if I artificially adjust my load data to meet LRFD standards on a bridge I'm designing rather than redesigning the structure, itself.) Politicians are making the scientists create their reality.


No. It was not proven that was the case. You do not seem to understand what adjustments were made or why. Tell me, do you think that the world is not getting warmer? Here's an actual scientist who thought the way you did, until he actually made his own adjustments. He tried to do what you claim has been "proven." He failed. But you probably never heard about it.

Did you even read the chart you posted?

That's ridiculous and more of the Obama is a Superman that does all things mentality. 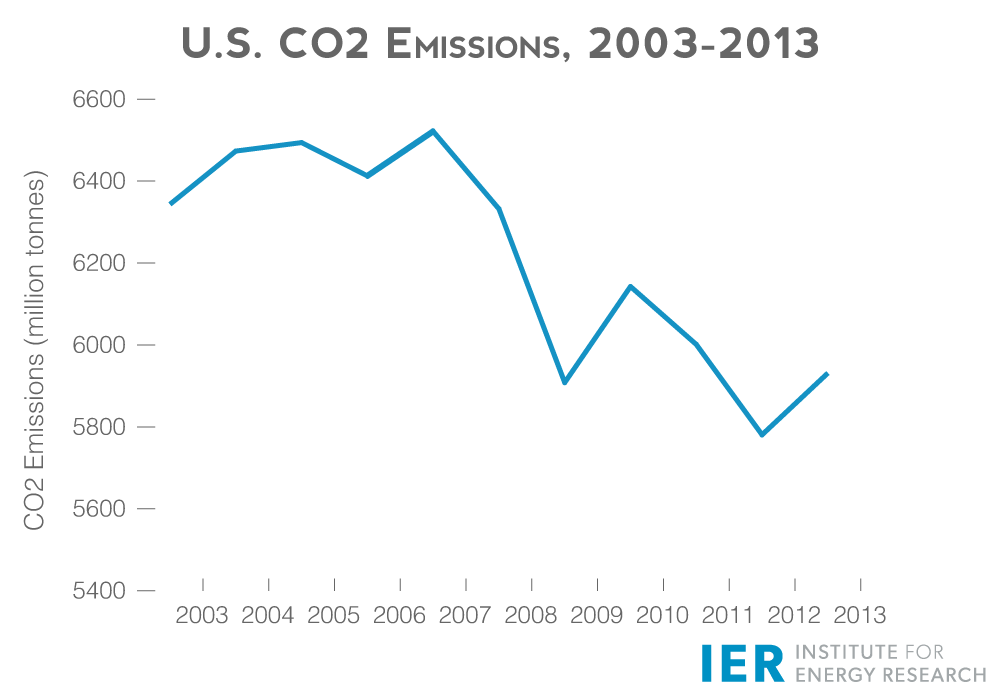 So you had slow economic growth and as the economy ticked up some CO2 emissions increased. This has nothing to do with Obama policies.

Bush did more with his policies to reduce CO2 than Obama. There's no evidence that Obama's policies have done anything.

Here's what happened under Bush.

U.S. carbon dioxide emissions dropped slightly last year even as the economy grew, according to an initial estimate released yesterday by the Energy Information Administration.

The 1.3 percent drop in CO[-2] emissions marks the first time that U.S. pollution linked to global warming has declined in absolute terms since 2001 and the first time it has gone down since 1990 while the economy was thriving. Carbon dioxide emissions declined in both 2001 and 1991, in large part because of economic slowdowns during those years.

"We are effectively confronting the important challenge of global climate change through regulations, public-private partnerships, incentives, and strong economic investment," Bush said in a statement. "New policies at the federal, state, and local levels -- such as my initiative to reduce by 20 percent our projected use of gasoline within 10 years -- promise even more progress." A number of factors helped reduce emissions last year, according to the government, including weather conditions that reduced heating and air-conditioning use, higher gasoline prices that caused consumers to conserve, and a greater overall reliance on natural gas.

With Bush, you can say his policies helped reduce CO2 emissions because it occurred while the economy grew at a healthy 3.3%.

So your argument makes no sense.

Did you even read the chart you posted?

And where are they now? Growth is growth, right?

Upon what are you basing those figures? GDP grew each year after 2009 it did not decline.

So you had slow economic growth and as the economy ticked up some CO2 emissions increased. This has nothing to do with Obama policies.

I understand the connection between the economy and CO2 emissions. I stated that, explicitly.


With Bush, you can say his policies helped reduce CO2 emissions because it occurred while the economy grew at a healthy 3.3%.

Did I say that the previous administration (which I was no more enamored with than I am the present one) did nothing? Any reduction is good. I don't care who brings it about. The fact that the current admin has had to deal with a hostile legislature hasn't helped, of course.

I think you're wasting your time. We're not dealing with people that are actually interested in the well-being of the environment and what the numbers scientists have compiled tell us about it's status. It doesn't matter that ice core samples clearly show an increase in co2 during certain periods, like the Industrial Revolution.

To them, this is a political issue. They have to toe-the-line on this issue because it is THE Right Wing agenda to deny climate change/warming/co2 level increases to protect the interests of those that are the biggest polluters....big business.

For those of us that separate the issue from politics, it's very frustrating. The disinformation and ignorance is astounding.

Again, your claim was that Obama policies had something to do with the reduction of CO2 emissions.

You haven't provided a shred of evidence to support this claim. In fact, CO2 emission went up and down based on economic growth. Even the EPA recognized this:

So Obama policies didn't do anything as it pertains to CO2 emissions as you claimed.

Bush on the other hand saw a reduction in these areas when the economy was growing at a healthy 3.3%.

My point is, your claim that Obama policies did something here is just not true. Obama seems to have myths that follow him that people like to regurgitate.


Again, your claim was that Obama policies had something to do with the reduction of CO2 emissions.


Again, I (carefully) never claimed that. I said that carbon emissions have declined.

So Obama policies didn't do anything as it pertains to CO2 emissions as you claimed.

I don't see how you can make that claim. Did CO2 emissions keep pace with economic growth (which you claim was actually a decline)? Your source doesn't say that.

Of course you claimed. Someone said Obama hasn't changed anything. You then said CO2 emissions declined under this Administration and you posted the graph.

I know people hate to be wrong on message boards because their message board ego gets hurt, but this is just silly.

Are you sure? I'm not that big a fan of the current administration but there does seem to have been a decrease in CO2 emissions.

Then you posted a chart that you obviously didn't read that didn't show a decrease in CO2 emissions connected to anything that was done under this Administration.

Thank you for quoting me. Not really necessary though, since I've done so myself.

Did CO2 emissions keep pace with economic growth (which you claim was actually a decline)?

It's obvious that you were wrong and there's nothing wrong with saying you made a mistake. If it helps you sleep better at night to believe you're right, then keep digging.

Your claim was just false and the Great Hussein and his administration had nothing to do with CO2 emissions dropping. It was just an ebb and flow based on the growth of the economy.

Bush had a big drop in CO2 emissions and this was in the face of an economy that was growing at 3.3%.

Your claim was just false and the Great Hussein and his administration had nothing to do with CO2 emissions dropping.

I neither claimed that the President is great or that his administration lowered CO2 emissions.

Bush had a big drop in CO2 emissions and this was in the face of an economy that was growing at 3.3%.

Are you sure? Was it due to policy decisions?


The U.S. Energy Information Administration released new numbers this week on U.S. carbon dioxide emissions from energy sources, and it turns out that our surprising 1.3 percent emissions decrease in 2006 was, indeed, a fluke caused by a milder winter and summer.

Carbon dioxide emissions from energy sources increased a total of 1.6 percent last year, or 96 million metric tons. To give this number some perspective, it’s as if we added 14 million more cars to the road. Alexandra Kougentakis points out that this “single largest year-over-year increase since Bush took office.”

Of course you quote some left wing kook of a website. Where did it say it was a fluke in the original report? Here's the report without any left wing commentary:

Nowhere does it say that Bush had nothing to do with it. That's your left wing nonsense. The fact is, if these drops happened under Obama the left would be singing his praises. But of course, Bush could never have anything to do with the drop.

Let's look at your chart again.

If that drop that occurred from 2006 to mid 2008 would have occurred under Obama, there would be climate fanatics pushing to make Obama king.