Researchers at MIT's Computer Science and Artificial Intelligence Lab have developed software that uses variations in Wi-Fi signals to recognize human silhouettes through walls. The researchers built a device, called RF-Capture, that transmits wireless signals and then analyzes the reflections of those signals to piece together a human form, according to a study published this morning.

IT CAN DETERMINE BREATHING PATTERNS AND HEART RATE

The technology is an extension of something the MIT team has been working on for a few years. In 2013, they used similar radio frequency technology to detect motion on the other side of a wall or obstruction, Gizmodo reports. Now, the RF-Capture is sophisticated enough to determine subtle differences in body shapes, and, with 90 percent accuracy, distinguish between 15 different people through a wall. It can even determine a person's breathing patterns and heart rate.

It's funny because it almost looks like Chakras or Kirlian photography. 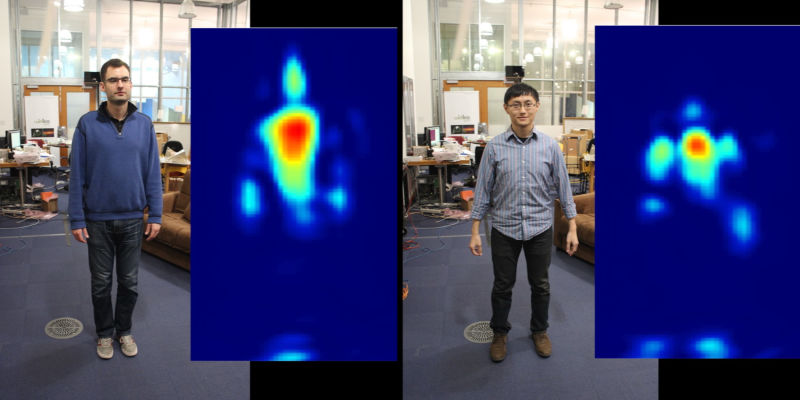 They talked about the areas this can be used.

While there's no real-world application for the RF-Capture yet, the MIT researchers say there are many possibilities. According to Gizmodo, the RF-Capture could be used to track the movements of an elderly person living alone, and be able to determine if they had fallen down. The technology could also potentially be used in smart homes, if certain gestures detected by the device were used to control appliances. The researchers expect the technology to get more accurate over time.

An area that obviously comes to mind is healthcare. Can it detect areas of sickness if you use a group of healthy people as the control group. What about crime? Police could detect when someone is in a building and where they're located.

I like this tech. Of course there can be privacy issues but we're in a technology age and just about every new tech that comes out has a privacy component to it.

Technology just got real.
Edit to add mandatory:
edit on 29-10-2015 by nonjudgementalist because: (no reason given)

As if that actually means anything anymore, I'd rather not have strangers and entities unknown to me looking into my home, into my skin.

Instead of using "DA CHILDREN" for leverage, it's actually elderly people. "We can see if they fall down," is what is pointed at.

Go take your draconian machines built on taking away others privacy at the whim of your ego elsewhere.

I mean - it sounds awesome. Truly a fascinating and (in my opinion) revolutionary piece of equipment.

But seriously entrusting it into the U.S. Government and other institutes - that would never succumb to any sort of corruption, we would hear about it on the news - is giving a pyro a box of matches, ten gallons of gasoline, and a barn full of hay.

Technology is too often used for subversive and - again, in my opinion - draconian measures that should not take place in a nation such as the United States.

But then again, I suffer from confirmation bias. I don't trust my government as far as I can count up their debt.


You bet. And I think I've been posting about it here for five years. Not sure why the verge thinks this is either new or remarkable.

Nothing like Kirlian photograpy or chakras, though, those aren't real and this is. The larger returns are coming from the centers of mass. So you see more return mid chest, mid upper arm, mid thigh and so on, than, say, fingers.

posted on Oct, 29 2015 @ 07:41 PM
link
Anyone else notice that the heart seems to dispel these particular signals, but they zoom right through the legs and pass easily through the head?

LOL. Or was it simply the subjects they chose that are revealed here. Hehehe.

While there's no real-world application for the RF-Capture yet, the MIT researchers say there are many possibilities


There was thread here about SWAT using this tech to determine where a suspect hides in a house.

The rf signals return movement. Akin to radar (Radio detection and ranging) they note the breathing lungs, the beating heart and blood flow through limbs. Staying still doesn't help, you have to breathe.

It only records the movement through a wall to a certain distance, so moving from room to room to avoid the stun grenade will buy time. Pets move, aquariums, fans and air conditioners all present noise to hide in.

Sit in the car in the garage and run the engine? Hang lots of mobiles in your house. Play records, what else?

These will end up in police and military hands.

The only legitimate use would be for scanning collapsed buildings for survivors.
edit on 29-10-2015 by markosity1973 because: (no reason given)

No, they already are in police and military hands. We just weren't supposed to know about it until now.

Theres even a name for it apparently: Visibuilding.

posted on Oct, 30 2015 @ 07:35 AM
link
And how long before the criminals use something like this to detect if you are home or not before breaking in and stealing all your stuff. No longer will the timers on lights, TVs, TV light emitting lamps and all the other burglar deterrents be effective.

Between this and some weaponized
minature drones you have great killing combo. I'm sure the military is all over this. You could clear out a building in no time.

There are plenty of legitimate uses for this technology. Military and police use is legitimate so long as they stay within acceptable policy and Constitutional bounds.

Most cops do their jobs well within the boundaries of the law.

You will never stamp out corruption. But you can punish it.

That is what we need to work on. Making sure offenders are actually punished for their crimes.