When the woods are scary

Tales of people experiencing high strangeness in forested areas has made Listverse's top 5 list of bizarre phenomena, right up there with shadow people. A paranormal researcher has given the phenomena the name 'PANic in the woods', referencing the mythological Greek God Pan, who is said to be a protector of wild places. 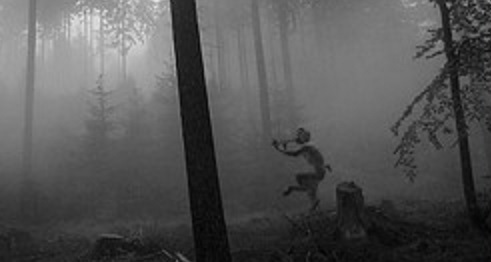 listverse.com...
From the Listverse story:


Victims experience a feeling that there is a powerful, sinister force nearby, and sense imminent danger. This usually leads the person to flee the area, desperately seeking out civilization. One curiously common characteristic of PANic, is that people often describe the woods becoming quiet and strange just before the fear starts, except for an unusual, escalating, buzzing sound. At least one article on the phenomenon has been written for Fortean Times Magazine by Patrick Harpur, called “Landscapes of Panic”. Many other alleged actual experiences of panic have been posted on paranormal forums. Is there really a spirit of the woods that shuns humanity?

Some of the stories involve time rifts, where people literally get transported back in time. One such story involved a group of children playing hide and seek in some apple orchards. Three of the kids squeezed through a thick hedge of bushes, and we're freaked out to see an old farmhouse that "shouldn't have been there". They looked in a window and saw an old woman baking a pie. They ran home and told their parents, who thought the kids were playing a joke, but elderly relatives were astonished, as the kids described a long-gone farmhouse that stood exactly where the kids had said. (This happened in Washington state, not far from Seattle.)


I found this very strange story on a paranormal forum. It contains some elements of the 'Missing 411' stories, but thankfully the missing children were found almost immediately.
paranormal.about.com...
www.facebook.com...


Forest Mystery:
It happened around the summer season of 2008, when I was only 7 years old. I used to live in the RAF quarters in High Wycombe, and due to the well-populated area, there were a lot of kids the same age as me.

Our mothers always gave us one rule: Never go in the forest at night. They never gave us a reason for not going in the forest, so against all our mothers' wishes, we would treck through the forest for hours on end.

Nothing ever really happened, apart from sometimes we would hear scratching on the trees, and have the urge to turn around because you would feel like someone was following you.


A gallery of eerie forest photos.

Thanks for reminding me...this
link was posted somewhere on the site you referenced, and shows a panoramic view of the spot where one of the "411" cases occured. Hannah Flats campground in Southern California.

olaru12
+9 more
posted on Oct, 28 2015 @ 04:47 PM
link
I spend a lot of time fishing remote trout streams in the Rocky Mts of Colorado and New Mexico. Some times I get the feeling that it's best if I just GTFO of that particular location even if the fishing is great.

I posted a thread a while back about my friend in Colorado who had a weird experience at The Great Sand Dunes.
That got me even more interested in this mystery.
You posted some good comments on that thread. Thanks!

posted on Oct, 28 2015 @ 04:59 PM
link
The woods are a beautiful and creepy place, I have been in some that just make my skin crawl and where you feel like you are being watched constantly and others that are just really nice places to spend time.

While never having any extra normal experiences that could be classified as anything other than weird vibes I can certainly say some places just seem off.

originally posted by: olaru12
I spend a lot of time fishing remote trout streams in the Rocky Mts of Colorado and New Mexico. Some times I get the feeling that it's best if I just GTFO of that particular location even if the fishing is great.

Same feelings, I would sing loudly to overcome fear, run like heck in certain areas on the trail. My dad made my brothers and I walk the dog in this uninhabited trail in n the woods in Alaska. I heard a Harp playing weird music once in the middle of winter far from any people, BLM land. I was 10 or 11, at the time. Very spooky in the certain area.

better a harp than a banjo just saying.

what creeps me out the most in the woods around where i live when i get the feeling of dread and being watched is that we have no large predators in the area. The largest we have is the Mountain lion which are few and very far between and by that i mean i have lived here for 30+ years and have traveled the entire state and have seen 3 or 4 total and none near my location.


i grew up on a manmade lake where people lost there lives during the construction i used to spend alot of time in the woods surrounding it and i always chalked it up to ghost as there were no other plausable explenations that i could think of at that age. Before you start telling me it was just another person out there i should let you know that i lived in a community with mostly retirement age people whom most of couldnt have traveresed as far into the deep as i would normally frequent.

Strangeness abounds regardless of whether or not one is welcome though.

I greatly enjoy reading accounts about it all. I think anyone who has spent a lot of time in the "woods" has had at least one strange experience, usually more.


I heard a Harp playing weird music once in the middle of winter far from any people,

On a couple of the paranormal sites I looked at, there were accounts of people hearing music out in the woods,
when they were miles from civilzation.

posted on Oct, 28 2015 @ 07:10 PM
link
I personally have never had a very scary moment in the woods,even though I spend a lot of time in the woods. The closest I've come to being scared in the woods was when I was out at night about 100 feet from my cabin in the woods that I visit every few days,I saw three sets of glowing eyes watching me I don't know if they were wolves or mountain lions because it was pitch black and I could only see the eyes,I wasn't very worried though because I always have a pistol or revolver on me when I go into the woods and I'd recommend anyone who goes into the woods often to do the same.(for protection from other people and dangerous animals)

originally posted by: Xeven
a reply to: ColeYounger

I have only felt that twice when visiting a friend and Turkey hunting in very rural Ontario, Canada (I live in Texas).

Twice I've had a different notion - literally just, time to haul ass out of here. Interesting whether this is some kind of psychological thing, or who knows but I've definitely felt it and in general I feel home in the solace of the woods.

posted on Oct, 28 2015 @ 08:27 PM
link
The woods. Spent so much time there, I feel like I'm living in the wrong era. Never really been spooked in the woods or camping and the like. More worried about being raped by a buck in rut...or bitten by a rabid coon.

originally posted by: openyourmind1262
The woods. Spent so much time there, I feel like I'm living in the wrong era. Never really been spooked in the woods or camping and the like. More worried about being raped by a buck in rut...or bitten by a rabid coon.

No kidding. Me too.

I've spent a lot of time n the woods whether it was hunting, fishing, or 4 wheeling and I have never felt spooked.

I have however had that feeling in a few houses surrounded by people. The sheer terror of NEEDING to GTFO, is indescribable I think. I am assuming it's the same feeling as those in the woods are getting.

I find the woods relaxing, generally. The only thing that disturbs the tranquility is large predators, bad weather, dangerous terrain, and water, quicksand, and the like. The most dangerous thing is a hunter with a gun, that is what I would run from.

I can vouch for the eerie calm and silence before the fight or flight response kicks in. I posted a while back on another thread about my time exploring the woods close to where I lived.

The short version of the story was this patch of woods was bordered on 3 sides by a railroad track, and two farmer's fields; the 4th side led deeper into the woods. Well, I went exploring, and somehow, I found myself lost - I am not a person to get lost (I can "sense" north with my eyes closed...for some reason, I couldn't when I got in there). All of the sudden, all noises just sort of dropped off; it felt like I was being watched by unfriendly eyes.

I started walking at a brisk pace in the direction I thought was North (which wasn't, as I felt like I was being led to the deeper part of the woods for some reason). All the while, I felt like something was behind me, tracking me. As usual, if I were to look back, I wouldn't see anything. I finally broke out in a run, and felt that whatever it was (imaginary or real), it took notice and started closing the gap.

After entering a field, my sense of direction came back, but the silence was still there; and this "thing" still felt like it was closing the gap still more. What I found very disturbing was that as soon as I landed my feet on the railroad track, all sound came back to my ears. I felt that whatever I perceived was after me stopped, but was still looking at me, almost as if it was not able to go forward.

The thing I learned from experience is if you feel like you should run from a spot, get out. Several of those spots in the photos would have been a "Nope, nope, nope" moment.