posted on Oct, 26 2015 @ 10:58 PM
link
Notice my new avatar is a nod to the upcoming Halloween, as we all know All Hallows Eve started out as a Celtic celebration that had great staying power even after they converted to Christianity, and now all over the world this pagan festivities is enjoyed in many cultures ,so not surprisingly it began to take on aspects of other cultures especially in the multi-cultural United States , most likely many here will be going as Zombies or Mummies or binge watching vid of those two examples which are borrowings from other cultures, One Kemetian the other Haitian, I'll start off with a Jamaican favorite. 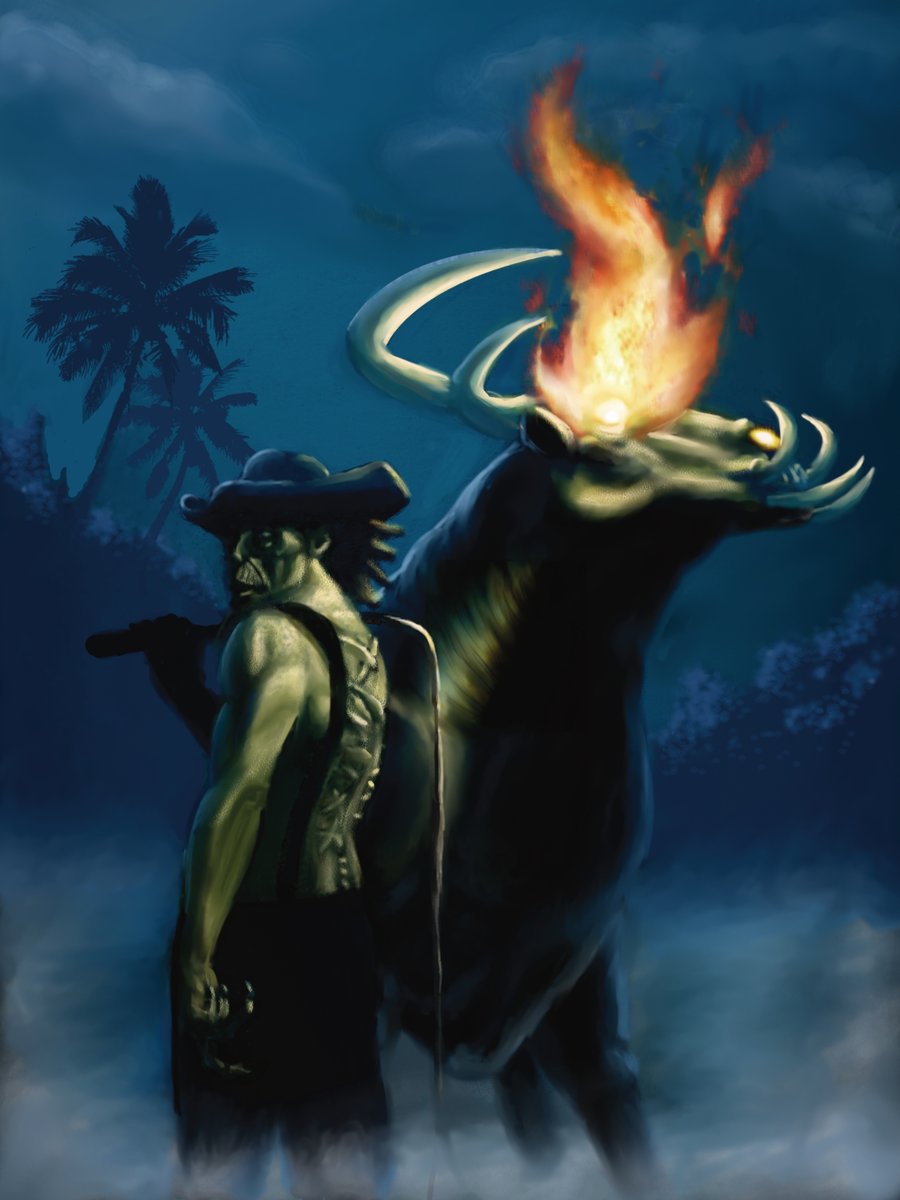 The Rolling Calf.
The rolling calf as was told to us by Gramps is supposed to be a morphing of a dead butcher and all the cattle he had killed, he is somewhat like a Minotaur that breathe fire and thunders after people in the darkness of the night.

Be careful how you stroll around the Jamaican countryside at night, because you really don't want to meet a rolling calf. A huge, calf-like creature which rolls along the road, blocking the way of night-time travellers, and chasing them with a wicked intention.

It has blazing red eyes that gash fire, and a chain that it drags behind it, making an unnerving clanking noise.

To escape a rolling calf, the victim can do a number of things - drop objects for it to count (most supernatural creatures in Jamaican folklore can be escaped in this way), get to a cross roads (road junction) before it, open a pen knife and stick it in the ground.

A rolling calf is also terrified of being beaten with a tarred whip held in the left hand.

Rolling calves are always male. They are believed to be the spirits of people (particularly butchers) who were wicked and dishonest during their lifetimes.
www.real-jamaica-vacations.com...

Holy crap, this is awesome. Love the "Rolling Calf". I will definitely participate a bit later. Fun!


One word of advice: read the room. Think of the membership here. Do you really want some of the people here sharing their tales of their loosely-interpreted idea of "ethnic horror"? You may just get stories about "day tuk are jerbs!"

posted on Oct, 27 2015 @ 12:18 AM
link
I was born on Halloween 👻 and it was crappy as a kid, while everyone else got money and stuff I got candy corn and pumpkin pie instead of cake. Since when is candy a suitable birthday gift on halloween anyway its not like trick or treating wasn't going to yield alot of that, and having your birthday in Halloween as a kid made the other kids think you were creepy. The Halloween type story I like most is actually not on Halloween, it was around Christmas some European culture used to have an antithesis of Santa someone who dressed like a demon and collected all the bad kids or just scared the hell out of them. Haiti has a thing like that too uncle gunnysack but that's not the culture in thinking of at the moment. Thanks for posting this topic and I really dont hate being on Halloween I was being dramatic for the hell of it. Happy Halloween.

posted on Oct, 27 2015 @ 07:26 AM
link
this is a baller topic, i hope it sees a lot of traffic. my mom's mom is from quebec city, and she told me a pretty strange one. back in the day there was a rich guy who preferred to go out in his canoe on sundays instead of going to church. as punishment, he was damned to paddle a canoe across the sky while being chased by packs of ravening airborne forest critters.

here's a different version i found. 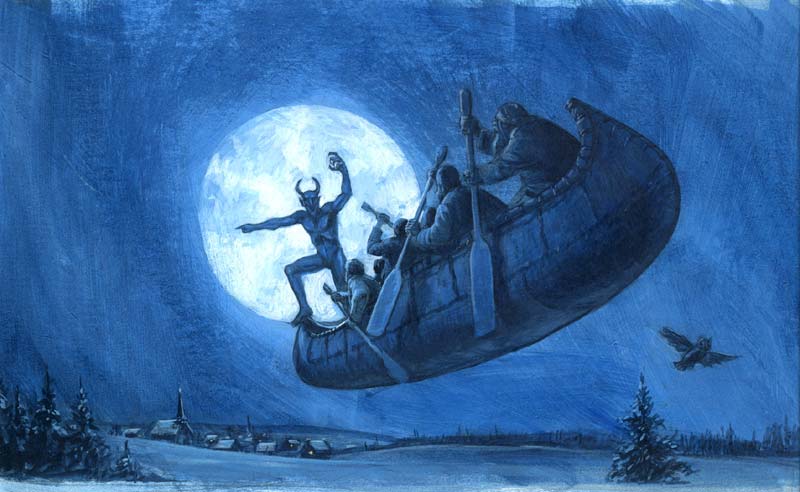 Long ago, there were a number of lonely lumberjacks working in the center of a very large forest. They cut down mammoth trees and watched them crash into the thick snow in exactly the place where they said the trees would land. They would cut up the trees and haul them hither and thither. They worked hard, Mon Dieu, very hard indeed! But they were lonely for the women they had left behind.

On New Years Day, it snowed so hard no work could be done. The men huddled in their camp and spoke longingly of their home. They passed around the rum and drank toasts to the New Year, but finally Baptiste said what they were all thinking: "I wish to go home today and see my girl!" There were murmurs of agreement, but Jean replied: "How can we go home today? There is more than two meters of snow on the road, and more snow is falling."

"Who said we were walking out of here?" asked Baptiste. "I am going to paddle out in my canoe." Now the men all knew that Baptiste had a canoe with paddles out back of the camp. Baptiste had made a pact with the devil. If the devil would make the canoe fly wherever Baptiste wished, the lumberjack would not say Mass for an entire year. However, if Baptiste did not return the canoe before dawn of the day after he used it, the devil could keep his soul. While Baptiste and his companions were in la chasse-gallerie, they could not say the name of God or fly over a church or touch any crosses, or the canoe would crash.

Many of the men refused to participate in Baptiste's New Years scheme, but he managed to find seven companions to fly with him in the canoe back to their home town to visit their women. Baptiste and his friends got into the canoe, and Baptiste said the magic words: "Acabris! Acabras! Acabram!"

When Baptiste was done binding himself to the devil, the canoe rose into the air and the men began to paddle their way through the sky to their home. Their womenfolk were so glad to see them! They celebrated long into the night, drinking and dancing. It was close to dawn when the men realized they had to return the canoe to the lumber camp by dawn or forfeit their souls. They searched for Baptiste, and found him as drunk as a lord, lying under a table at the inn. They bundled him into the canoe, spoke the magic words, and paddled away. Knowing that Baptiste would start swearing if they woke him, one of the men tied him up and gagged him so he would not speak the name of God at an inopportune moment and crash the canoe.

When Baptiste awoke, he sat up, struggling with the ropes that bound him. He managed to loosen the gag, and shouted: "Mon Dieu, why have you tied me up?"

At the name of God, the canoe took a nose-dive, plunging towards the ground. It hit the top of a large pine tree and all the men tumbled out and fell down, down into the darkness just before dawn. They were never seen again!

posted on Oct, 27 2015 @ 05:06 PM
link
Here's a Kansas one that has to do with conflict between the early settlers and the native Cheyenne. They say the creek is haunted to this day.

Many people love a good ghost story, particularly in October. Although ghost stories are most often associated with Halloween, mysterious events have happened year-round in Kansas.

White Woman Creek winds through Greeley, Wichita, and Scott counties in western Kansas. It gets its name—and its ghostly legend—from an old story full of love, betrayal, and violence.

Many years ago a group of Cheyennes attacked a western settlement in retaliation for an earlier raid on their camp by white men. The Cheyennes recaptured their stolen goods and also claimed 12 white settlers—10 men and two women. As time passed, the white women decided to stay with the tribe and married Cheyenne men. Most of the white men also were accepted and remained with the Cheyennes.

Among the white men, however, was one person eager to leave. After many months with the tribe he was able to steal a horse and travel to Fort Wallace. There he convinced the army that the remaining whites were being held against their will. In the ensuing attack the head of the tribe, his white wife, and their infant son were killed, but not before the wife had slain the white man who had betrayed them.

The Kansas stream where the Cheyenne village once stood is known today as White Woman Creek after the tribe leader's white wife. Many people claim to have seen her ghostly figure and heard her singing along its banks.