posted on Oct, 26 2015 @ 09:09 AM
link
So ive been doing some research about gypsies, and one of the facts is that the fleed around 1000AD from a warlord, but The new study now sets their arrival in Europe in the sixth century – a time when Britain was still in its early post-Roman era.

Roma gypsies in Britain and Europe are descended from "dalits" or low caste "untouchables" who migrated from the Indian sub-continent 1,400 years ago, a genetic study has suggested.

There are five large groups:

The Romani population comprises five large groups, each of which in turn includes a number of subgroups.

- Roma: In Europe, chiefly in the Balkans and in Central-Eastern Europe.

- Sinti: In the Northern areas of Western Europe, in France and in Northern Italy. 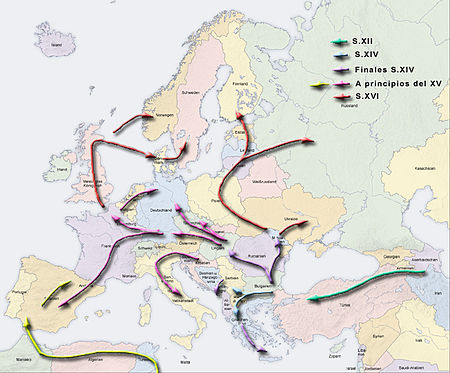 The Romani population essentially comprises five main groups, each of which in turn includes many subgroups or communities with a variety of different traditions (...). Each of the five main groups--Roma, Sinti, Kale, Manouches and Romanichals--is mostly concentrated in a specific area of Europe, but because of their incessant migrations in every direction, different subgroups or communities can be found anywhere. Currently, in Europe, the Roma are to be found chiefly in the Balkans and in Central and Eastern Europe. As we have seen, there are also long-established communities in some areas of Central and Southern Italy. The place of origin of the Sinti (singular: Sinto) is clearly spelled out in their ethnonym: they come from the Sindh, an area in the North-West of India (now Pakistan). Therefore the ethnonym 'Sinto' is also a toponym. The Sinti speak Romanès or Sinto, a dialect of the Romani language with many words borrowed from German. The Sinti are mainly to be found in the Northern regions of Western Europe, in France, and in Northern Italy (…). The name Kale or Calè (with or without the accent, these words are the masculine plural of the single nouns Kalo or Calo) comes from the Hindi adjective 'kala', meaning 'black'. The Kale described themselves as 'black' because of the colour of their skin compared with fairer-skinned Western populations. Rajko Djuric (1993) traces this ethnonym back to Kalinga, the name of an Indian ethnic group, or to the goddess Kali. The Romani communities of Finland and Wales call themselves Kle, Calé in Spain, and Calaos in Portugal. Some Romani groups in Brazil call themselves Calaos, and Kaulja in Iraq and in North Africa, especially Algeria. The name Manouches comes from the Sanskrit term 'manus', meaning 'man, human being'. In many dialects of the Romani language, the same term, also in the form 'murs', also means 'husband'. The Manouches are to be found mostly in France, and in Italy there is a corresponding community of Sinti people in Piedmont (…). The Romanichals or Romaniche (this ethnonym recalls the definition given by Jan Kochanowski, 'Romano Chave') are mainly settled in England, but past deportations have spread them as far afield as Australia and North America. Their ethnonym derives from two Romanès words: the adjective Romanì, and 'chals', or 'chels', coming from Romanès 'chavo/chave', meaning 'child/children' but also 'young one/ones'. Therefore the literal translation of the term should be 'the Roma children/young ones'.

Gypsy groups in Britain trace their own roots back first to Egypt – where they believe the name "gypsy" comes from – and beyond that to India. Joseph Jones of the Gypsy Council said early photographs show British gypsies with Indian facial features and styles of dress until 100 years ago.

"Now we can see that they arrived in one single wave from the north-west of India around 1,500 years ago."

one of my great grandparents was adopted from a young unwed gypsy girl.
things like that apparently went on in the old country

posted on Oct, 26 2015 @ 11:32 AM
link
What i have read from various sources in the past decade, tells that 1500 years ago it was groups called Domari that left India but mainly towards MidEast but likely also some groups vent towards Europe as well. It was speculated that Domaries are like Romanies cousin tribes and also there are speculations that they are not connected to Romanies.

Then there is bigger main groups than Cale/Kale in Europe, for example Kalderash Roma, which was not even named here for some reason.. Also there are many speculations whom Romanies were during India, what i understand Dalits are not actual ethnic tribe so to speak but one of the classes they have in India, one of the lowest class at that, class that is banned from upper class society or something like that, whom have hundreds of millions of ppl in India.. I have read some of the Indians own theories of our ancient history and mostly what i read is they connect Romanies to Rajputs clans, whom was Northen Indian defenders, their class was called Khastriya = soldiers and have fought for hundreds of years Muslims and Mongols invasions until finally around 1000ad they were betrayed and Muslims got trough their defenses and killed many, slaved many and rest of the armies divided in 3 larger parts, one withdraw to Himalayas, one deeper in India and joined the other armies and one vent to Turkey and from there later in Europe.

You are taught stories, look deeper..