More than a little bit contrived and suspicious, don't you think?


DALLAS – A 14-year-old Muslim boy who was arrested after a homemade clock he brought to school was mistaken for a possible bomb will be moving with his family to the Middle East so he can attend school there, his family said Tuesday.

Call me cynical, but clock boy and his headline grabbing family will be no great loss. As the old saying goes "don't let the screen door hit ya in the a$$ on the way out!"

This kid was no great scientific mind, he took the guts out of an old Radio Shack clock and put them in a pencil case to look like a bomb. No great scientific breakthrough here. Then he took it to school and showed it to people, against his science teacher's advice. After being detained and released, Dad (and boy alike) use their new found fame as a pulpit to sully the US public's injustices in the name of education and science, all while seeing what free goodies they can get. When their 15 minutes of fame is up...they leave. (Hope you're happy liberal PC America, but I for one am not mourning the loss of this great "scientific mind")

What a joke. It was all a publicity stunt from day one, and from my perspective this kid ranks right up there with 'Balloon Boy'.

I agree, something stinks. That kid freaks me out and he thinks he's a clever little twit. Go take apart clocks and put them in pencil cases somewhere else


What intelligence? Any idiot can pull a clock apart and stick in a metal brief case.

Guess you had to get your raging boner of hatred in though right?
edit on 22-10-2015 by Lysergic because: (no reason given)

To be fair, it only looked like a suitcase bomb. It's not like it was a half eaten pop tart that looked like an assault rifle.

Fact is, good ol' American hostility, arrogance & bigotry ran a kid out of the country. What's shameful is that no one's ashamed of it. If it was a whitey honky boy harassed over a project fora specific class, leaving for White People Country XYZ, you'd be having a fit over the injustice.

Look deeper into his story concerning is father, this is why nobody GAF, good bye, good riddance, enjoy Qatar, looks like they're itching for war.

What about the white kids that have been expelled for less? Apologetic uninformed BS if you ask me

Heh, yeah...or a crayon drawing about a dream someone had where someone overheard someone else 'talking' about pointing a finger at a fictional dinosaur.

posted on Oct, 22 2015 @ 11:09 PM
link
Here's what happened here, America...in case you were'n't paying attention. Political correctness and liberal 'touchy-feely' BACKFIRED BIG TIME! All the "we're all a village" people who condemn any finger poining (as guns) and expression of opinion (as hate speech), the very ones who get kids kicked out of schools for wearing a T-shirt with a color other than grey, got bit. Consequently, they decided to spin the whole discussion toward paranoia...the same paranoia they weave as part of their party line, but this time it was "different".

It's called "damage control" and 'walking it back'.

The liberal left are the first people to advocate kicking some kid out of school because he points his finger at another student (like it was a gun), but these same people are the ones who champion a kid who pirates a Radio Shack clock into a pencil box to look like a bomb. Why? Well, because they never expected the 'blowback' the whole situation would cause. It's all media spin.

It's not like the whole liberal left knew this kid was going to do what he did, but when he was detained for doing something they vehemently advocated support of...they had to act to defend themselves. "oops, that's not what we meant!!" We wanted you to detain all the OTHER (read: white) kids, not the brown kids, not the grey ones...none of them. So then they had to spin it a different way (to save face), and they played the paranoia of the Patriot act and all manner of other things to deflect the real issue. Then it became an "education" issue, it became a social issue, it became a "creativity" issue...and it became a racial bias issue. AND then, they just really wished it would all just go away. But it didn't go away. (oh gosh).

So now little Ahmed and his dad are going to run away to Qatar. "Hey, we got our goodies from you saps...See ya!" How convenient.

....and all is right as rain with the world now, right?

What a bunch of WAY over-hyped BS! 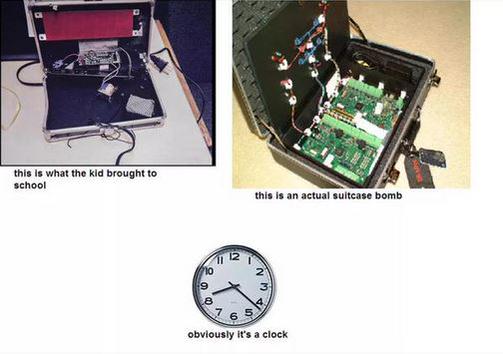 posted on Oct, 24 2015 @ 07:44 AM
link
I think there is more than just a bit of telling hypocrisy in the fact clock boy and family are moving to Qatar. Despite all the oppression and racism clock boy and his family bemoaned here in the US they wind up moving to a country where oppression, racism and human rights violations are orders of magnitude worse than in the US.

In his continuing zeal to illustrate how much better off he is somewhere other than the terrible, oppressive, US he was quoted as saying...

“I loved the city of Doha because it’s so modern,” he said. “I saw so many amazing schools there, many of them campuses of famous American universities. The teachers were great. I think I will learn a lot and have fun too."

Yet the reality of clock boy's new found destination, where he will have so much "fun", is that it is a state sponsor of terrorisim, a theocratic monarchy where slavery is considered a status symbol. In Qatar his enjoyment of freedom of speech and outspoken criticism of the government and customs would also be rewarded, but rewarded with the gift of a life term...in prison! No free goodies, no tours of the palace or photo ops with the Monarch and no media spotlight to bask in, just a dank prison cell and a life of servitude. Oh, the freedom!


But Qatar is in fact quite different from Texas. The country’s human rights record is positively appalling. It’s also an absolute monarchy ruled by a Al-Thani family, promised parliamentary elections have never been held, and the country is run on Sharia law. Qatar has been rated as having the fourth-highest concentration of slave laborers in the world. (RELATED: BBC Journalists Jailed For Telling Truth About Qatar)

Freedom of speech is sharply limited in the country as well. In 2011, for instance, poet Mohammed Rashid al-Ajami was sentenced to life in prison for insulting the country’s emir, though the sentence was later reduced to a mere 15 years. The country also prohibits non-Muslim missionary activities and restricts the public worship of non-Muslims, a noted contrast to the softer “Islamophobia” the Mohameds have encountered in America.
- Daily Caller

It's his choice. He and his family are free to live where they wish. Frankly, I wish the young man well, but I can't help but see the hypocrisy of their attention grabbing media play over this whole incident. Honestly, this wasn't about freedom at all, was it? It was really about'let's see what all fame and fortune we can get out of our moment in the spotlight'.

Grow up. Honestly. I don't care about any of this garbage. You have no idea what anyone is thinking or why they make the choices that they do. Move on from this kid and move on from the people who find the whole situation incredibly annoying.


Then he took it to school and showed it to people, against his science teacher's advice. After being detained and released, Dad (and boy alike) use their new found fame as a pulpit to sully the US public's injustices in the name of education and science, all while seeing what free goodies they can get.

It's his choice. He and his family are free to live where they wish. Frankly, I wish the young man well, but I can't help but see the hypocrisy of their attention grabbing media play over this whole incident

Walk on water or swim.

You're astonishgly successful at making yourself look immature and foolish.

And your point is what exactly?

And people in this thread are makeing a great point of showing the USA up as a bunch of dumb, closed minded xenophobic cowards.