Researchers find neural switch that turns dreams on and off

At the flip of a switch, UC Berkeley neuroscientists can send a sleeping mouse into dreamland.

Researchers inserted an optogenetic switch (see video below), into a group of nerve cells located in the medulla. This allowed them to activate or inactivate specific neurons using laser light. 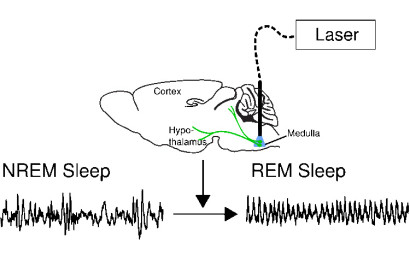 While other types of neurons in the brainstem and hypothalamus have been shown to influence REM sleep, controlling this small group of neurons put 94 percent of all mice into REM sleep within seconds.

“Many psychiatric disorders, especially mood disorders, are correlated with changes in REM sleep, and some widely used drugs affect REM sleep, so it seems to be a sensitive indicator of mental and emotional health,” said first author Franz Weber, a UC Berkeley postdoctoral fellow. “We are hoping that studying the sleep circuit might lead us to new insights into these disorders as well as neurological diseases that affect sleep, like Parkinson’s and Alzheimer’s diseases.”


Researchers also found that activating these neurons while the mice were awake had no effect on their wakefulness. Instead of passing out in seconds, the mice actually began to eat more. They were happy.

Coincidentally, the neurons used to induce REM sleep are also a subset of nerve cells that release the neurotransmitter gamma-amino butyric acid (GABA). These nerve cells are most active during periods of eating or grooming, both considered highly pleasurable activities to a mouse.

They also inserted the light-sensitive ion channels into a different set of neurons in the medulla: glutamatergic neurons, which release the neurotransmitter glutamate. Activating these neurons immediately awakened the animals, the opposite effect of activating the GABAergic neurons.


To me, this is huge! Having the ability to induce REM sleep would not only fulfill me spiritually, my overall mental health would improve drastically.

Welcome to the next level of sleep. Take my money.

What about the other six percent who didn't go into REM sleep? Are they insomniac mice?

The only light needed to make you sleep better is Miller Lite.