page: 1
29
<<   2  3  4 >>
log in
join
share:
krines
+12 more
posted on Oct, 13 2015 @ 05:16 PM
link
I just wanted some feedback and probably start a discussion on what Gary Mckinnon, the Scottish hacker who was to be extradited to U.S., found in NASA computers. He took cue from Donna Hare, who worked at NASA earlier, who gave testimony during disclosure project that she knew NASA had an air brush dept where all ufo were airburshed out. His own account is in the following video where he explains how he managed to hack and see what he could. But again for those asking for concrete proof, he did not 'download' those images for reasons he explained. This is a legit case, Obama personally wanted him brought to U.S. for 'damages', and while a lot of reporting has conviniently left out the ufo and free energy component of the subject, that was precisely the motivation for him to even try. (Apparently another hacker from UK, Lauri Love, also followed in his footsteps and hacked the computers including the US Army,NASA, the Federal Reserve and Environmental Protection Agency. He is to be extradited to U.S for charges)


Looking forward to thoughts and opinions.

www.youtube.com...
edit on 13-10-2015 by krines because: Adding minor details, and correcting spelling mistakes.

It is important that you mention that Gary depended on Donna's story, which he claims to have confirmed. But is Donna's original story valid?

He 'tested' what she said. I wouldn't call it 'depended'. And again irrespective of which trail of breadcrumbs he followed, he found 'evidence' to confirm it. Donna Hare is a whistle blower, unrelated to Gary, who gave her own testimony based on her experience He had no reason to 'prove' her assertion though. It just happend to be a 'motivational factor', as he already was a hacker. The question if her story is valid, can only be confirmed by others, people Like Gary Mckinnon. Her testimony can be found in the following video if you are interested, and you could compare the info in the 2.

I believe he saw what he claims.

And I believe that an alien false flag may have been considered as a way to implement a NWO. I don't put anything past the military industrial complex. The more people that believe the technology is alien, the more support there would be to suggest that the false flag was truly alien.

But I will refuse to believe in Aliens until I see one myself. I don't believe aliens would be supporting the current actions of our leadership.

Fair enough! Although I wonder why would the pictures captured by NASA, I am guessing deliberately, inadvertantly capture these 'crafts' which will need to be air-brushed out before the pictures are in the public domain. Wouldnt they know better if these are infact secret military crafts? Also if you do watch the video by Donna HAre, she mentions her colleague who divulged this info, got hit for doing so. If it is a military false flag op, wouldnt it serve for them to keep maintaining these delusions where people believe in ufo while all this time it was our own? Why this internal, secretive over-reaction?

You think NASA is smart enough to not take pictures of their own "Alien" spacecraft?

My theory on Aliens is simple.

You don't allow technology to end up in the hands of people who think it's ok to arm terrorist to make regime changes.

Either I am giving aliens with intergalactic travel too much moral credit or they don't exist, at least not one's that visit the earth and allow us to reverse engineer their technology.

I don't want to believe in immoral and ignorant aliens that would allow their technology to end up in the wrong hands in the first place. So until I see one for myself I choose not to believe in anything alien.


I agree with your take. If it was nothing they could have quietly let him spend six months in jail and changed the laws in reaction to what happened.

There was a lot of press about his story when it first came out, and it seemed to me that it was only in later years, after much legal battling that more tantalizing stories of secret space program information gleaned from his hacking came out in alternative press coverage. I think he might have embellished some of this as sort of a political statement for all of the # he had been put through. A "Disclosure Project" motivated individual (with Asperger's OCD)...

But he probably did hack into something reasonably way above top secret. At the very least he must have inspired better encryption methods and passwords!

I wasn't familiar with this story, thanks for sharing!

Maths is not my strongest subject Could you elaborate what you meant?

I figured they went 'full retard' because there actually was damage done , or you really think it was escalated deliberately to draw public attention, to let such rumors permeate the public consciousness? I find the latter a bit hard to believe. Gary certainly didnt think it would come to such a huge issue, he was told he might have to do 6 weeks community service or max 6 months in prison, and be let off. Then it seems there were legislation changes, which he believes, as he mentioned in the video, were a result of his case, in a bid to get him extraditied and make him serve 60 years in U.S. prison , an be made an example, a deterrant for other cyber criminals. I find the idea that this was the 'plan all along' by the U.S. government a bit of stretch of imagination. He wasnt the only one trying to hack NASA's computers either, as he mentioned.

If you watch the video, a bbc interview, he mentions exactly what he did and what he found in his own words. Plenty of reporting done on this issue , simply highlighted the hacking issue and cyber criminals, skating over all the facts about 'ufo', 'free energy, disclosure etc. I am not 'interpreting' this, its his own words.

posted on Oct, 13 2015 @ 06:56 PM
link
I give Mckinnon absolutely no credibility whatsoever. When he decided to align himself with Project Camelot it was no longer worth consideration, in my opinion.

posted on Oct, 13 2015 @ 07:02 PM
link
our leaders ARE the aliens. they started civilizations and gave them religions and politics and are still around. we are dealing with some really strange characters and they may actually be afraid of us. hopefully they feel some kind of moral obligation or responsibility for our welfare. we need a technology upgrade hopefully they will allow it to happen. you can't blame your dog for crapping on the rug if you don't let him out once in a while.

Okay, but his story stayed the same. I dont care for Project Camelot, and I dont know why he may have agreed to do an interview with them, but to me the credibility of the story does not depend on the channel it comes through, although it may be edited and emphasised with different frame works. For example, the video link i posted is an interview given to the bbc. The story is what it is. And his case was covered by many major channels, even in mainstream, ofcourse they left out the ufo and free energy bits. Perhaps this 'censorship' made him agree to Project Camelot's interview? Since he was being painted as a cyber criminal and an asperger sufferer, without really taking his side of the story into account? I think our biases often interfere with our ability to discern the true gist of the issue. He was a random guy, who thought disclosure project was cool and worth investigating, went ahead and found it to be easier than he could imagine.

Not so much. The public spectacle was relative to the cause. The spectacle had been started already, and the reaction wasn't going to be muted. One could argue that it's because of what was released and I think that's true to an extent.

Hackers also get quietly spirited away far more often than ever makes the papers. Because they "got got" before they could do anything else.

I can agree and I am still open to the possibilities, but I will not waste my time on his story until something of substance is presented.

I understand. His story's validity is only in context of collaborative testimony regarding the same matter by other, 'unrelated' individuals. Which is sort of like supportive evidence not a stand-alone 'proof'. The 'building 8' in NASA was mentioned by more than 1 person during the disclosure project testimonies, which is where he found the data too apparently. At the end of the day, we can only discern for ourselves based on the data available, since none of them have presented a life-size ufo to prove it.

originally posted by: krines.... The 'building 8' in NASA was mentioned by more than 1 person during the disclosure project testimonies, which is where he found the data too apparently.....

The description of Building 8 in Hare's testimony is sound, here's a shot of me there in 1976 with Dick Underwood, head of the JSC photo lab, showing Gemini flight film to Allen Hynek, head of CUFOS. 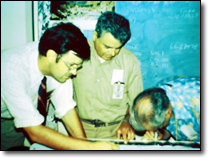 I've had serious problems with Donna's story for a long time, explained here:

New narrative features have appeared recently involving moon pictures, which apparently she had forgotten about in her original testimony.
edit on 13-10-2015 by JimOberg because:


And in the case of the last 3 individuals I mentioned there, they had released damning, damning evidence of US government (and agencies) wrongdoing.


Are any of the mentioned, dead? I'm quite confident that the government could get them somehow. Perhaps this was orchestrated and monitored, to let the information "get out." It was too easy for McKinnon to get the non passworded terminals. He says he was doing a noble thing so he could give the world free energy. Dog Poop. A criminal who has no problem committing a federal offense, was going to find a zero point mechanism for free energy to give to the world...Yeah right. If he had plans for such a thing, he would make himself a trillionaire - in short order. JMO...