WTF is conservation? Conservation is the act of preserving, guarding or protecting. How is this preserving a rare... oh wait. I GET IT! Stuff and mount it... Makes all sense now. Carry on!


When Chris Filardi, director of Pacific Programs at the American Museum of Natural History in New York, was finally holding the elusive Guadalcanal moustached kingfisher, he told Slate writer Rachel Gross, it was like finding a unicorn.

Filardi had been searching for the orange, white, and brilliant-blue bird for more than 20 years, when on a field study in the high forests of Guadalcanal in the Solomon Islands, he finally heard the “ko-ko-ko-ko-kiew” sound of what he described as the unmistakable call of a large kingfisher.

After days of tracking, he and his colleagues captured a male moustached kingfisher in a mist net.

“When I came upon the netted bird in the cool shadowy light of the forest I gasped aloud, ‘Oh my god, the kingfisher,’ one of the most poorly known birds in the world was there, in front of me, like a creature of myth come to life.” Filardi wrote in a Sept. 23 blog post.

The team snapped the first-ever photos of the remarkably photogenic bird and made the first-ever recordings of a male variety of the species (a female was described back in the 1920s).

Then the team killed it.

The guy goes on to justify the killing, simply because it's not in his database of birds. So to protect it, they must have a dead specimen.

“The specters of extinction for island birds loom in today’s world,” Filardi wrote. “The collection of a single moustached kingfisher is not among them. And, beyond advancing science, I believe this act will positively impact the kingfisher’s world.”

Would you kill this bird for the sake of science? 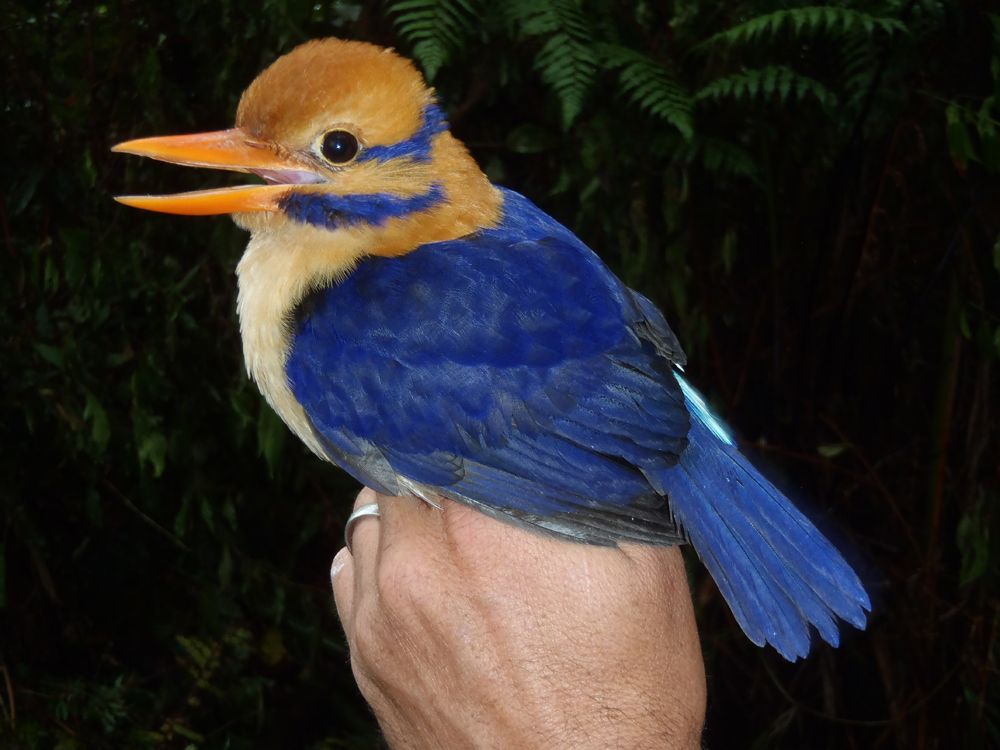 The day will come when Karma bombs humanity back to stone age for all the crimes they have committed against Nature.
edit on 10-10-2015 by starwarsisreal because: (no reason given)

posted on Oct, 10 2015 @ 03:52 AM
link
a reply to: StallionDuck
I own a company called avia wild bird care, providing all supplies for garden birds and a wildfowl feeding product range, (due to bread products being unsafe for wildfowl).
He did this act so he could polish his ego, its disgusting and should be likened to killing a panda or elephant etc.

This is like finding a Unicorn, to use his words. Would he have killed a unicorn if he found one, I really do worry about our responsibility towards nature. We are guardians of these species and should be assisting them.
I pity any alien species we do find and pray they are better equipped than us.

posted on Oct, 10 2015 @ 05:17 AM
link
a reply to: StallionDuck
What a beautifully coloured bird. It is a ruthless predator though. It makes me wonder how and why it evolved those particular colours.
The only reason I can think of is camouflage. That means it is trying to be invisible from the first reaction of a fish when it sees something out of the corner of its eye.
The question I cant answer is how did it now the fishes view and understanding of what colours it sees and what would fool it. It had to have had a fishes eye view to develop its camouflage.
Something for you to think about.

The vast majority of the knowledge we possess on some of the worlds most impressive species, has been collected from dead animals. Their corpses are skinned, their musculature catalogued, their tendons noted, their tensile strength, elasticity, and texture made record of. Their organs are weighed, measured, tested, their blood examined.

In all science, sometimes it is necessary to destroy a sample in order to learn from it. You want to know about quakes? You build a miniature building on a shake pad, and destroy it. You want to examine a blood sample for certain markers and information? You have to separate its components by spinning them until their components disassociate. You want to know about Kingfishers? You have to kill one, skin it, examine its entrails, learn its anatomy, and figure out what threatens it most. I highly doubt that one man, killing one bird, will do less for the species than figuring out what pesticides it might be at risk from, if its hunting grounds or food source is contaminated by anything, or if that food source itself is endangered.

It seems counter intuitive, but you should check out The Field Museum in Chicago if you think that this event is either wrong, or unusual, or for that matter harmful. The people in that museum staff go all over the world, making records, taking carcasses and taking them apart to learn about the animals on the slab, and their efforts are some of the most extensive in terms of conservation that can be found anywhere in the natural sciences.
edit on 10-10-2015 by TrueBrit because: Grammar edit


Now this one bird has been killed, collected and de-crypticised, all others will be expected to obey strict plumage code or be declared an anomaly. Classifying creatures over-simplifies matters for academic convenience.

As a hole-nesting species, it is potentially threatened by introduced rats and cats which are found at high altitudes

posted on Oct, 13 2015 @ 03:06 AM
link
What a beautiful bird. Creepy guy and how his hand in the one pic looks to be almost reaching up to twist the little head. Maybe anesthetizing the bird for a while to take samples would have been more beneficial for the species in the long-run then tracking the bird afterwards. Apparently that's being to hopeful around some of these researchers.
edit on 13-10-2015 by dreamingawake because: (no reason given)

Please if any aliens can here me,
kill off the human race...

I don't think I'd be able to kill the bird. No. I wouldn't. I would let it fly free, just as I did, the monarch butterfly that landed on my hand a few days ago, while I was outside.

TB , you always bring moments of sanity to otherwise heartfelt moments of anger . But in this case i feel you could be wrong . A what if . What if this bird was the one male needed to keep their species strong . How many pairs do they need to keep them genetically strong , 32 , 80 , i dont know . What if that bird was male number 32 . Would you not try and track the bird and find out numbers habitat and such . I will leave you with a short video , i used it in a thread i did . Lets not get to this stage , and we can start by not killing extremely rare birds .


Chris Filardi is the "Director, Pacific Programs" with a public Email address of "filardi@amnh.org" and company phone of 212-313-7431. So anybody wishing to reach out and personally tell him what you think of his actions you can and should do so.