The Cave Of Hanging Snakes

In the jungles of Yucatan, near the village of Kantemo, is a hidden bat-cave. The yellow-red rat snake (Pseudelaphe flavirufa) is a small forest snake that normally hunts rodents or lizards, but these particular snakes have found a creepy new way to feed.

The Cave of the Hanging Snakes is actually known as the "Bat Cave" by the locals of the nearby village of Kantemo. This is because the cave is home to swarms of small bats that can often as thick as a frantic leathery cloud. In order to take advantage of this delicious flying rodent population, a population of snakes has taken to living in the ceiling and high up on the walls of the cave. From their cracks and crevasses, they wait until the bats swarm as they enter or leave the cavern and then they dangle down and catch bats in their mouths. 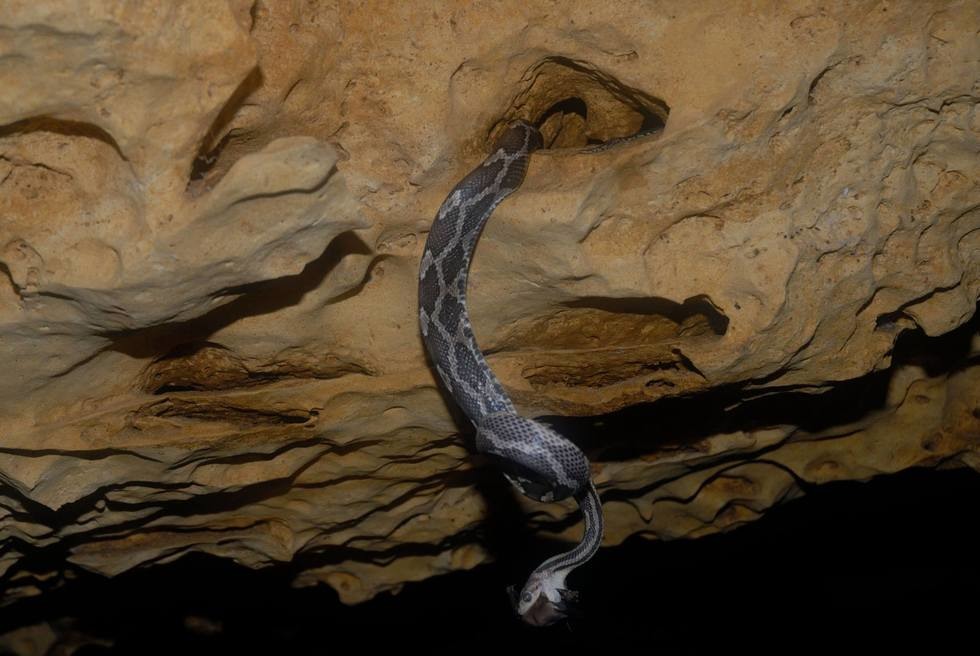 These snakes, having neither competition for their food nor predators to feed on them, have become blind through time. 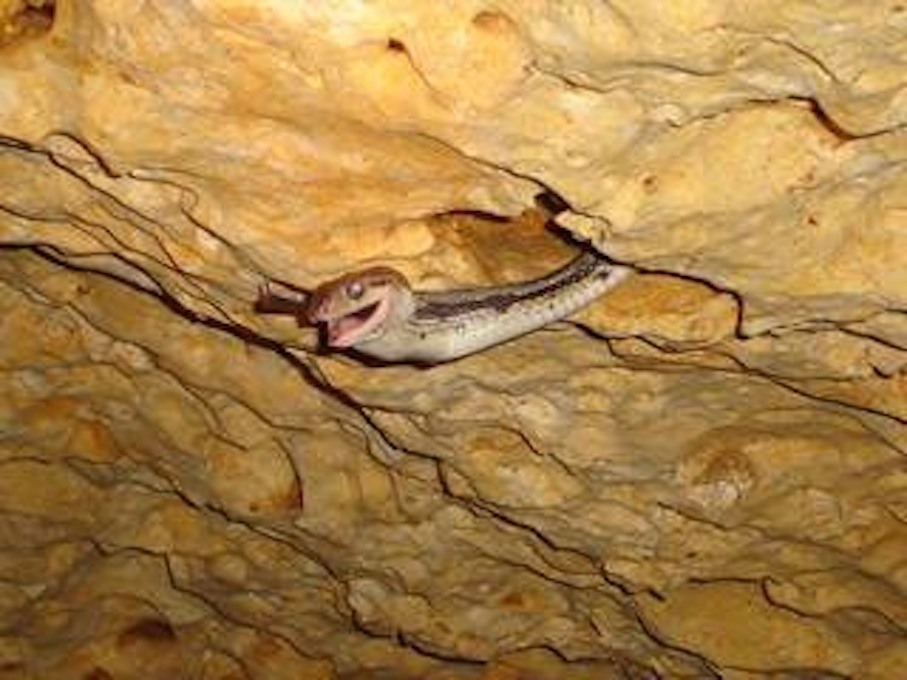 Just in case that isn't enough to terrify you, there is a pool of albino crustaceons in a flooded room of the cave for company. This is close to the ancient Mayan sacrificial well, according to the video below. Don't say I didn't warn you!

posted on Oct, 9 2015 @ 03:56 PM
link
Christ I wouldn't venture into there for anything! the only way that could be worse is if the cave was covered in hundreds of spiders above and on the ground ... dear God

Good god. I have a mild fear of enclosed spaces, but add some snakes and it would become a full on phobia. Thanks for ruining whatever bravery I had left.

posted on Oct, 9 2015 @ 04:05 PM
link
I only flagged and starred without reading one word of the thread just because you had the balls to make a thread on this. I hate snakes and they give me nightmares so I can't read more than the title.

Gentlemen, if it makes you feel any better I would be running out of that cave with arms flailing and wailing like a ..well, banshee.
You'll both be pleased to know that there are public tours available! I wonder who I could book one for....?
edit on 9-10-2015 by beansidhe because: + 1

I once broke and ankle from jumping out of a deer stand because of a slitherin' serpent from hell. This guy hates snakes, nor really sure why I clicked the thread.

S&F for creeping me out!

Seriously though, those are some smart snakes.

It's their dangling that really creeps me out. You couldn't even run away in case you slipped on an albino prawn-creature!

I've gone and given myself nightmares tonight, I know I have.

Any time you like, eeyipes. Just send us a postcard, let us know how you got on.

However, that's for snakes on the ground. I'm cautious of snakes in water because they're much faster than me & they're usually venomous. And I'll flat out avoid snakes in trees because I don't expect to see snakes above me, so the sight makes me uncomfortable.

Why did I type all of that? Because the thought of snakes dangling in a cave would completely freak me out. Traveling in caves is supposed to be slow & dark. Adding snakes to the mix is bad enough because it's hard to identify them in the dark. But having them hanging slowly over my head is too much. Plus I can't tell if they're venomous or not. No thanks

(I starred & flagged out of respect, though)

Thanks for that! Just the right time of year also!

Just in case that isn't enough to terrify you, there is a pool of albino crustaceons in a flooded room of the cave for company.

It was! Good job!

posted on Oct, 9 2015 @ 05:08 PM
link
That's going to be one cool visual effects scene for the next treasure hunting video. Running through a corridor with snakes just hanging out of every hole and snapping away at the smallest vibration...

I am an old lady but you sounded like you were describing me, except for the guy part. I too have walked the dark alley alone, lied in wait on the graves in the graveyard, for the unsuspecting person walking past, to give them a fright. I refuse to run from anything if I don't know what it is, so while everyone else is running away, I am always the one running towards.

That cave is one place you will never see the likes of me. It goes without saying that I am not going to pay for the experience, and if I ever found myself in one by accident, I am sure the whole world with the aide of the internet will hear of it. "Old Lady Goes Bat Crap Crazy After Stumbling Upon the Cave of Hanging Snakes!"

i just about live with snakes. i had 5 (five!) snakes in my house last season. i even stood on one in the dark. an other had its head raised when the brave but fearful bark of my little dog woke me - and that right at the end of my bed!

your post makes me very nervous as does the mere imagination of what could be in those videos. i will not click on them. i keep telling myself that snakes are not as bad as i fear and imagine. and i keep telling and telling - but i'm still just as nervous

you spooked me good

It is the dangling that's the worst bit, isn't it? And they're blind, so they'd just lunge at you...uurgh.

It is the best (worst?) Hallowe'en combination I could ever imagine!

No don't look at it Lucia, it's lots of them popping out of cracks in the cave roof trying to eat the bats. With translucent yellow crayfish underneath. And really bad music.

I wouldn't want to wake up to a snake at the bottom of my bed, that would be too much creepiness.