Why would Iraq ask Russia for help when they are a U.S puppet government?

posted on Oct, 9 2015 @ 11:28 AM
link
With this new news of basically Iraq being fine with Russia helping them out with airstrikes, isnt this odd considering they are a puppet government from the U.S?

I know the Iraqi president said that if it came to that it must be under the coalition led the U.S so maybe thats his little insurance policy against the U.S being angry at him.

Is this Iraqi government going rouge or something?

Iraq is the female domestic violence victim who has finally plucked up the courage to seek outside help lest she continue to be loved and hated whenever the old man comes home drunk.


Is this Iraqi government going rouge or something?

Like when their army fled ISIS instead of standing and fighting for their cities?

BUT - Never mind the fact that we shouldn't have gone there, disbanded their army causing chaos and confusion for the next decade (+), and managed to make the Marshall Plan look like the Magna Carta of re-building countries (Read Imperial Life in the Emerald City )- at the end of the day doesn't it say more about them not wanting to fight for their land than it does Russia for trying to get a piece of the pie? Let Russia have it. And honestly? If they do a better job with those people who were never supposed to be together inside of 1 border in the first place (unless you have an iron fist madman to keep them straight....ehemm) than kudos to the Russians. I won't fault anybody for making something better, just the countless centuries of people pretending they actually CAN
edit on 9-10-2015 by DuckforcoveR because: (no reason given)

I believe the "going rouge" happened a long time ago almost everywhere...so I guess my response is what's left to go rogue from...

posted on Oct, 9 2015 @ 11:51 AM
link
a reply to: aiolosmartine
The Iraqi government is elected by it's people, however because of US occupation of Iraq it is prone to US's influence too.
US is not living in the middle east or near it. Russia is living near the middle east. Many of ISIS members are caucasians and Russia is worried about this.
Moreover US was not honest about fighting against terrorism, why should people of the world believe him !?
This is while we all know ISIS and similar terrorists are supported by allies of US !

posted on Oct, 9 2015 @ 11:56 AM
link
Bro, you don't get it, it's all part of the massively complex conspiracy that governs this issue. You see, the US orchestrated 9/11 in order to have an excuse to invade Afghanistan and eventually Iraq. This was all so that we could get rich by stealing their oil and (insert complex conspiracy idea here).

Now, when neither the Afghans nor Iraqis cooperated with the plan we were forced into our contingency conspiracy plan, which was to continue to pump troops, money and weapons into both of these countries for ten years.

Now when this plan also failed and both countries continued to suck at life at an epic rate and in a truly admirable fashion, we were forced into contingency conspiracy 3. In this part of the plan(or lack thereof) we trick China into winning the contracts for Afghanistans lithium resources, and we trick Russia and Iran into getting involved in Iraq and Syria, saving the day and profiting from the stability and oil.

It's so obvious. It's a big, American conspiracy.

I think it's to put pressure on the US and focus their mind Iraq rather than Syria , the message is simple ,if you can't do it we'll get someone who can.
Knowing the state of relations between the US and Russia they know they are in a strong position to make demands given the state of affairs in Syria.

I have much similar theories in my mind, all to this point, what is unfolding now at least it looks to me how Russia indeed is kicking westerns in the nuts over here, quite rightfully so i might add. If Russia and Allies can handle Syrian situation well enough they have shaken westerns in the whole area. That would mean that all these big business men from west would have just lost sick amount of invested money and other resources. Anyhow this situation is not over yet, if any of this is the case, they might do some real desperate to save anything they could, or they could just back off for now and try to approach another front elsewhere. Yup even if ME would calm down now, you can just bet these wars will sparks elsewhere soon after.

Also i have wonders what will come of west and SA ties, one theory is that SA will try to force start ww3, they cannot go far with the way they are trying, even if westerns blindly back em up, with dollar signs over their eyes.
edit on 9-10-2015 by romilo because: (no reason given)

I know, shocking, isn't it? Here I was thinking the USA was evil and responsible for all the bad things in the world, yet it would seem that might not actually be true after all....

But I did find a picture of the Iraq going rouge...and perhaps a little bit green, there's some grey too... 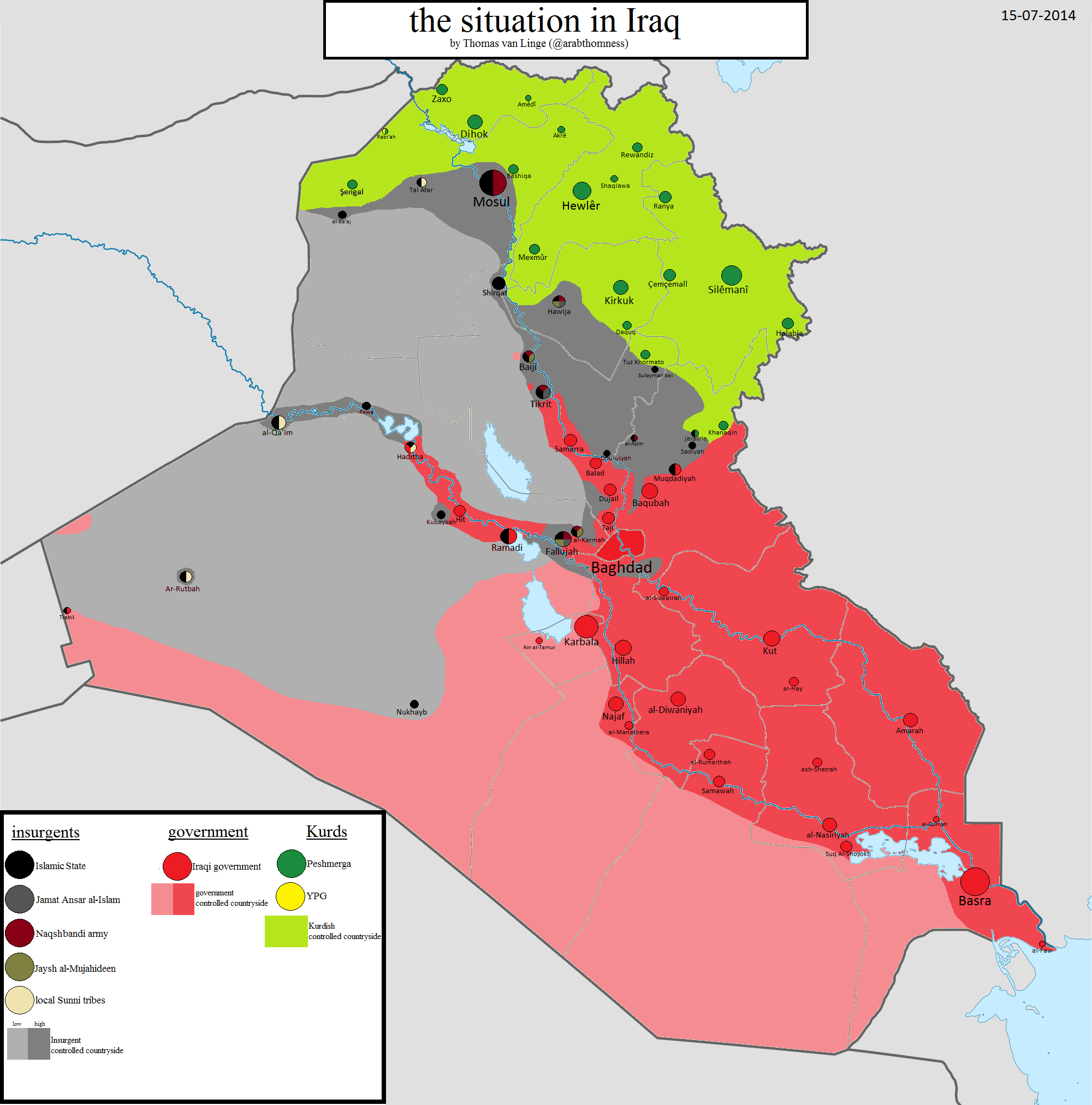 Because the USA has entirely cocked up in the region.

Dont think Russia will fare much better....but meh better them than us right?

posted on Oct, 9 2015 @ 12:37 PM
link
Basically because the US cut and ran thanks to the current administration.

originally posted by: neo96
Basically because the US cut and ran thanks to the current administration.

Pretty much this, Exactly like Hillary abandoned the American citizens in Benghazi, she took a page out of Obama's play book.

RIGHT .
Let them spend THEIR troops lives on a failed effort. Iraq isn't a puppet govt ..it isn't even A FUNCTIONING government.

posted on Oct, 9 2015 @ 04:12 PM
link
I also find this very odd and it has been going on for a while. I remember way back when the IS was a JV team Iraq had to buy some old planes from Russia due to the delivery delay of US planes. They also requested US airstrikes which were at the time denied and by the time the hurried order of Russian planes got there and they started using them the IS already had a massive foothold in the nation. There is a lot about the situation that is very strange.

Maliki, in an interview with BBC Arabic yesterday, blamed the U.S.’s “long, very slow way” for delaying the delivery of 36 aircraft. “We shouldn’t have just bought U.S. jets, we should have bought British, French and Russian jets to provide air support. If we had air support, none of this would have happened,” he said, according to excerpts e-mailed by the BBC.

How about this for a possible explanation:

Assuming that Iraq is indeed in the situation of having Uncle Sam's hand firmly lodged in its rear, its call for Russia to step in might have been initiated by one of the Alphabet agencies. Its purpose would be to bring the Russians into a conflict zone, to see what methodologies, tactics, technology and firepower can be bought to the field by Russia.

The US kills two birds with one stone there. First and foremost, getting ones enemies to do ones dirty work is entirely in keeping with the US play book, geopolitically speaking. But getting them to do that dirty work in a nation which is already awash with intelligence assets, monitoring gear, drones and gets scrutinised by satellites constantly, puts them under a very powerful microscope. It also offers Russia a chance to royally balls things up in a very public and entirely unpleasant fashion, which we know they are capable of from a historical standpoint.

I am not suggesting I have any evidence of any of this. I am just responding to the premise with a possibility.

posted on Oct, 9 2015 @ 11:35 PM
link
Subjugated nations are always doing stuff to piss off thier oppressive overlords, if they can get away with it without too much punishment.