What Happens When You Have Too Much Money? ...4 Billion Too Much.

posted on Oct, 9 2015 @ 01:12 AM
link
Apparently, you spread the wealth in a way that will better the lives of others. This guy gives me hope for the world we live in, even if I don't have much hope for the people running it.

The man who created the 5-hour Energy drink says he has more money than he needs—about $4 billion more. So he’s giving it away, spending his fortune on a quest to fix the world's biggest problems, including energy.

Manoj Bhargava has built a stationary bike to power the millions of homes worldwide that have little or zero electricity. Early next year in India, he plans to distribute 10,000 of his Free Electric battery-equipped bikes, which he says will keep lights and basic appliances going for an entire day with one hour of pedaling.

“If you have wealth, it’s a duty to help those who don’t,” says Michigan resident Bhargava, 62, in a documentary released Monday, Billions in Change, about his Stage 2 Innovations lab. “Make a difference in people’s lives,” he says, “Don’t just talk about it.” 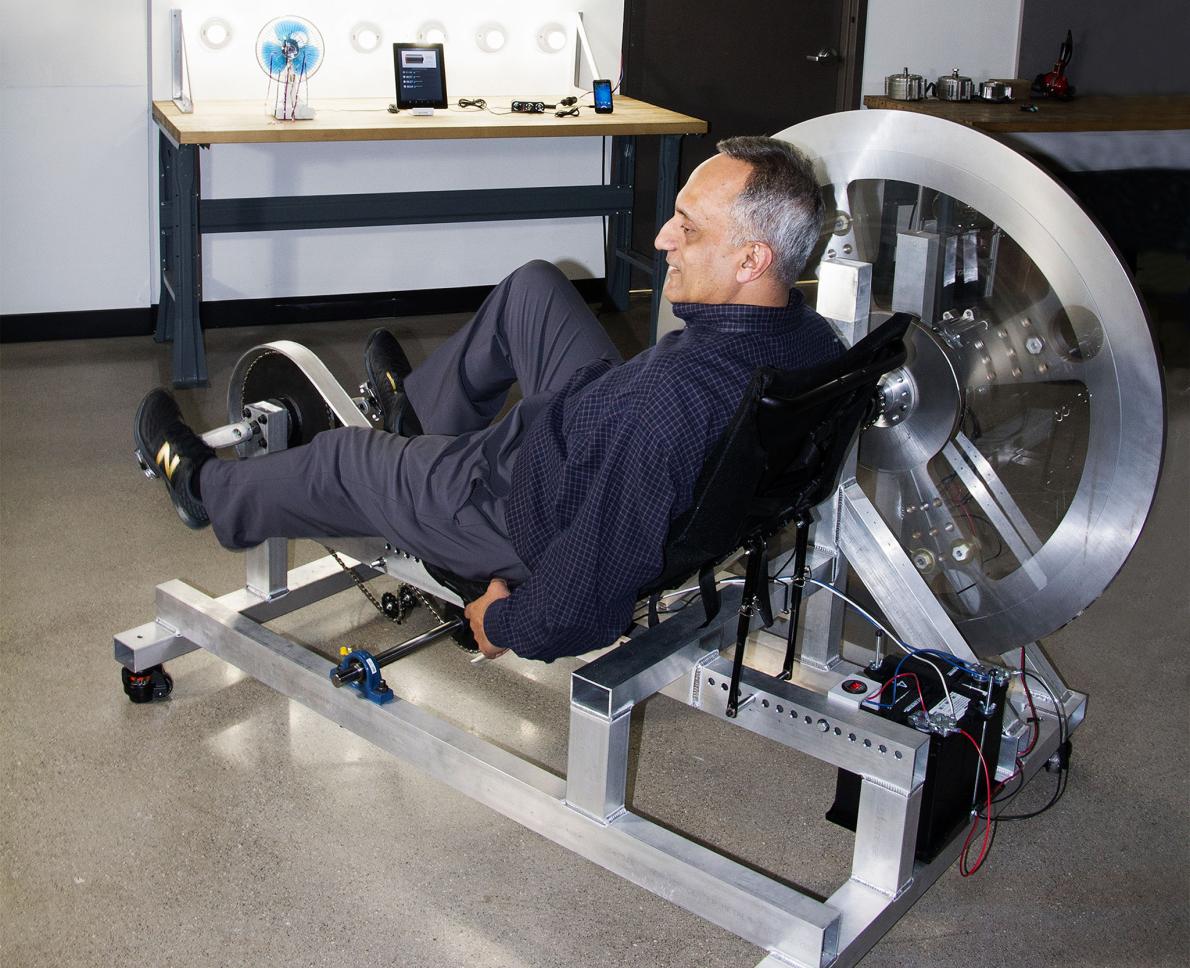 The guy is a college drop out because "he got bored". I guess it's true, you don't have to have a masters to come up with a cool idea and make billions from it and use a good deal of it to better the lives of the needy.

He doesn't stop there. He's got a brain full of ideas that he's working on that can help change the lives of millions, perhaps billions of people.

Bhargava’s team has come up with innovative ideas in health, water, and energy. It’s pursuing Renew, a medical device that functions as an auxiliary heart by squeezing blood from the legs into the body’s core.

To address drought, it’s building the Rain Maker to convert 1,000 gallons an hour of any kind of water into drinkable water. Bhargava says potable water could be piped from offshore barges with this machine, now being tested at a desalination research facility in New Mexico.

He has an even grander idea—one aimed at nixing the world’s reliance on fossil fuels, which emit greenhouse gases when burned. Whatever people think of climate change, he says in the documentary, “pollution is a problem.” His answer: tap the heat from deep beneath the Earth.

While geothermal energy is already widely used in some countries, including Indonesia and Iceland, Bhargava takes a novel approach. Rather than using steam—mixed with chemicals—to bring the heat to the surface, he would instead pull it up with a graphene cord. He notes graphene, stronger than steel, is an incredible conductor of heat.


He seems like a really nice guy. More power to him. May the richest of the world follow in his footsteps!

This a man I would like to represent me as a politician if he could stay true to his ideas sounds like he is a heck of a man.

In this case he is wanting that but in a positive manner(unlike the others).

posted on Oct, 9 2015 @ 03:08 AM
link
a reply to: StallionDuck
This is evolution of the mind. Lets hope all powerful people with so much wealth will be infected by the admiration and love shown to a man who desalinated water. A true hero.
Imagine if the next billionaire to get the bug sorts out the energy crisis for developing countries. This story, if true, renews my faith that we are winning this war over evil. A hero will be redefined because this action, we will start to invent products for necessity and not profit.
I hope it is successful and catches on.

Holy hell, this is a heroic set of ideas, very helpful--and with the right sort of determination we can only imagine this guy has, it'll be so much more extraordinary. If he chooses to stick to what he says and go through with his plans, ideas and testing for this, it could be more than revolutionary, that is if some Americans are willing to change the ways of their bad chemical habits. Which generally when this comes up, it doesn't happen because the Country(s) aren't big fans of this type of stuff for some reason.

I'm all for this, and I pray this guy sticks to the ground he's laid out before him

posted on Oct, 9 2015 @ 03:48 AM
link
He had better be careful. There are some very powerful people who have a vested interest in keeping things the way they are. If they wanted people's lives to improve any more than what has already been allowed for those lucky enough, they would have made it so a long time ago. They have many tools in their toolbox for dealing with these characters who think they can change the world for the better. There is an accepted program in place for billionaires. You can offer a token amount to philanthropic causes that make a tiny dent in the problems plaguing humanity and the planet at large, and receive bountiful accolades for doing so, but that's it.

originally posted by: 3n19m470
He had better be careful. There are some very powerful people who have a vested interest in keeping things the way they are.

“I think someone’s going to kill me,” he says with a laugh, noting how such an idea could upset geopolitics.

I wish much luck and Godspeed to this man.

I think there already is a process to take the salt out of salt water. It's called the Desalination Process.

Most people who have everything and have more money than they need turn to gaining power. (Something I feel Trump is on). If more billionaires had more heart and donated some of their excess to help the less fortunate, reduce the tax burden on most Americans by infusing money into infrastructure programs, and help prop up programs like social security, Medicare and other programs for the elderly, just think of the impact they would have on the lives of many! To me that would be more gratifying than having the power to influence.

posted on Oct, 9 2015 @ 03:11 PM
link
I saw a video once about just this thing. About how and why billionaires spend their money and they came to the conclusion that the majority of them have a god complex. Yes, they'll spend their money on helping others but only where and on who they spend it on. Now I would say that these billionaires have amassed their money(like the Gates) by making the ordinary man on the street pay for something. Think of a billion for a minute?
Now why didn't they help the ordinary man in the first place and not charge so much for their product?
Now if this guy ,who is probably Indian, help the whole of India by providing serious family planning to help the overpopulation problem India is suffering from?
Yes the world could do with cheaper and cleaner sources of energy but I think a better use for his money would be to update Indias infrastructure.

Who has 4 billion dollars? Are they single? Or do they have any sons?

I will now go back and read it properly.


ow if this guy ,who is probably Indian, help the whole of India by providing serious family planning to help the overpopulation problem India is suffering from?
Yes the world could do with cheaper and cleaner sources of energy but I think a better use for his money would be to update Indias infrastructure.

Education is key. If he invested in India's future as well their infrastructure, it might take longer to show a difference but it would.

Also there is going to be massive short of engineers in the world, push that on the agenda through educational programs as everyone who does it will end up with a job.

It's one of Dyson's goals/ ideals, it could probably do with a push in India as well.

I don't think you're looking at the big picture otherwise California would have plenty of water wouldn't they???

Makes you think on a bigger scale

Once we get red of the greedy elitists, men like this will change the world so fast the current world will be but a distant nightmare.

posted on Oct, 11 2015 @ 12:04 PM
link
a reply to: AK907ICECOLD
I've said it quite a number of times. If the US government spent less BILLIONS of dollars on weaponry and spent a few MILLIONS of dollars on de-salination plants (the technology is there) along the Pacific coast the people in California would have drinkable water coming out of their ears.