originally posted by: thektotheg
This has been posted before and is a known hoax.

It is not a "known" hoax. It is a suspected hoax. It only becomes "known" when scientific evidence has been presented for this, and none has. A Google search finds no web pages that expose the film as CGI, only opinions and assertions offered without supporting scientific evidence. The only argument that has been proposed to support this view is the difference in angles of the shadows. But it is a false argument because the supposed shadow of the leg of the table is actually a reflection, which does not have to be cast at the same angle as a shadow. The angle of a reflection is set by the line joining the vertical leg and the camera, whereas the angle of a shadow is set by the line joining the light source and the object. If this video were genuine, one would expect to notice a difference in angles, so the fact that the angles do differ actually argues in favour of it being real, not CGI. No evidence or detection of CGI has ever been presented. It can be argued that someone intent on hoaxing would not have bothered to make the extra effort to add a shadow.

There is no scientific evidence invalidating this video, just as there is no proof that it is genuine. People will either believe or disbelieve, based upon their world-view. Opinions expressed in a previous thread do not amount to proof of hoax, particularly when some were based upon a false interpretation that did not distinguish between reflections and shadows. 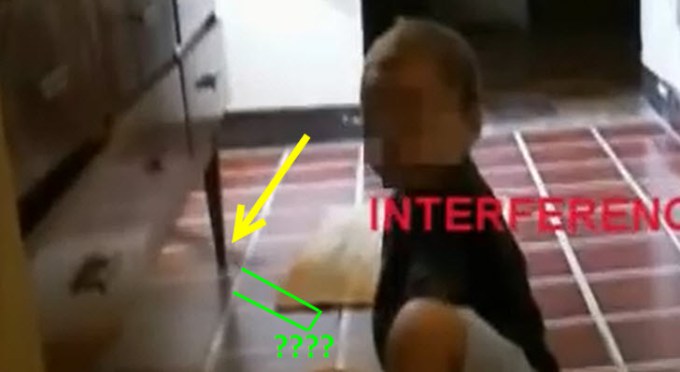 oh and this was the source of the original video, if someone wants to see the other fake goblins

posted on Oct, 9 2015 @ 02:28 PM
link
Very obvious CGI. Maybe even a cut from a bad movie. Shadows etc don't matter. That is easily worked. Or wronged! Wronged in my opinion!

Okay, there is another option. Use your fking eyes. If you don't care to look into the countless times this has been debunked that's your business, but don't act like there is anything magical going on here. Use common sense and stop blindly believing what you see on youtube. Stuff like this harms us as a whole. It's like televangelists preaching in stadiums full of people. No matter how many times I see it, I'm always shocked. People really are dumb enough to buy these things. It's a shame.

The problem is, when there are actual anomalous things going on, they don't get taken seriously - because of threads like this.

TLDR: You're hurting the team. Stop.

And not even a good attempt - the kinesthetics of something that shape, that small, would NOT run at the same gait as someone of a human size.

That's just someone added in via CGI.

posted on Oct, 10 2015 @ 08:29 AM
link
Little People are a fairly common occurrence in places around Sweden, etc. In Shamanistic cultures these things are very real, though the western world clips it off as fallacy.

It's all fun and games until they start destroying construction equipment.

Personally I have no experience with CGI so I can't tell if that video is real or not, like most commenters, but would be pretty cool if it was.

posted on Oct, 10 2015 @ 01:34 PM
link
Real or not, it's interesting that you can find some manifestation or another of this phenomenon in countless cultures. Faeries, leprechauns, djinn, goblins, nymphs, etc.

I'm particularly fond of two types of American non-human entities since reading an account of a four or five year old boy in the archived stories of disappearances at mt shasta where this boy was coaxed to a cave where he found a body double of grandma, mom, and dad but he could tell they weren't his real family. This follows the description of a phenomenon that can be attributed to the faery type entities of north America and although there are hundreds of tribes all with a different name for these beings I'll stick with the Cherokee to whom it's the Little People and specifically what the Cherokee call Nunnehi. There are two short entertaining links below.

And don't forget for the natives it was just two generations back this was still a part of life just like in Ireland and the UK where I've read up until two gens ago, today's grandparents, if you grew up in a small town or out in the countryside blaming faeries for something or doing something superstitious so as not to offend the wee folk wasn't just fictitious child's play, it was part of life and rural culture.

PS. So I can't be flagged for off topic, far as goblin in video, im 99% certain its a gag. But I don't agree with the method used for debunking...the shadow BS...other 1% is on alien not goblin. Plenty of animals can end up any size it just depends on size of tank/cage/etc. Take koi for example. Small as a goldfish if kept in a bowl or over a foot long if you move it to a pond. So maybe that's the size of a humanoid if he came from a planet the size of Pluto but with the same population as earth.

posted on Oct, 10 2015 @ 01:59 PM
link
It's obviously fake and old, but why do the shadows not match? He is running towards the door which has sunlight shining through it. His CGI shadow looks correct.

originally posted by: game over man
It's obviously fake and old, but why do the shadows not match? He is running towards the door which has sunlight shining through it. His CGI shadow looks correct.


As i said earlier in the thread.......
The goblin has a shadow but the leg of the cabinet has a reflection in the floor.

posted on Oct, 10 2015 @ 04:41 PM
link
It's hard to say whether it's fake or not, but the physics of the way it runs are strange... It should be moving faster than it is, almost like its pace was slowed by a fraction of a second. Which leads me to believe it's likely CGI.

originally posted by: thektotheg
a reply to: micpsi
...
The problem is, when there are actual anomalous things going on, they don't get taken seriously - because of threads like this.

TLDR: You're hurting the team. Stop.

originally posted by: Blue Shift
So the table leg makes a shadow reflection on the floor one way and the goblin makes a reflection at a complete different angle?

The table leg shows a REFLECTION not a shadow. That is a reflection on the tiles.

This is definately cgi.

One thing however, nice slow mo side effects for whatever reason in the video. You would think there would be more to it then that short clip and whoever filmed it would try to follow the little goblin fellow...But nah! I suppose it may be a common occurrence around there were they have them running around, so they don't bother following or trying to film more...Or some such. Meh!

But ya! Same as I said years ago. Most likely a hoax, simply do to that fact, as these videos always seem to cut at the part were there would be more then some added sound effects and slow mo going on. And also that the fact that goblins are just not that stupid to run in plain view like that. Jeez, everybody knows that.

posted on Oct, 10 2015 @ 11:47 PM
link
Here's a clip showing modern CGI. Get past the first minute and a half and I'm pretty sure it'll start blowing your mind. I'm linking this because I don't think many of you realize just how powerful modern CGI is (or how easy it is to create).

yes the goblins shadow is correct . i think people need to stop being internet experts. still doesn't mean this vid is real but it just could be very good cgi.

originally posted by: chiefsmom
Coming out of nowhere?
Maybe it's just me, but you can actually see a bit of it, like it is just standing behind the child, when the child is moving at the beginning of the video.
That would be some pretty good CGI wouldn't it? (Maybe it's easy, I really have no idea.)

Anyone else notice that?

After watching 10 more times, I do think it is CGI, but interesting how they got that "Image" behind his/her head.

Yes, it's very simple. You can do it with blender using motion tracking. You just create a regular movie first, then place software markers on various locations in the first frame (grid style surfaces with lines work best). Then you can add your animation along with a few light sources.
edit on 11-10-2015 by stormcell because: (no reason given)

which begs the question, if you have the wit to perform a camera match , why not, in the simple adjustment to the cgi generated light source ?

odd really , such a simple adjustment,

or are multiple shadows being casts from different angles , the table legs being prominent from the white washing machine or whatever it is .

originally posted by: funbox
a reply to: stormcell

which begs the question, if you have the wit to perform a camera match , why not, in the simple adjustment to the cgi generated light source ?

odd really , such a simple adjustment,

or are multiple shadows being casts from different angles , the table legs being prominent from the white washing machine or whatever it is .