I do hope you are on that ship when it sets sail for China...
that ship might need you..


This is true but the immediate economic impact on America and the crash of the stock market is the real problem.

We just aren't tooled up to replace the supply chains yet and the economic disaster that would impact the world would most likely spell doom for most citizens around the world.

Let's hope this goes the way of peace not war. We can win the military conflict not so sure about the economic war.

Umm you do realize that If china strikes the US first their DEBT is NULLIFIED right? IF china shoots at th eship and or heaven forbid sinks it the stock markets curency exchange may flop but thats about it. It instantly means th e US dont owe CHina crap. YOU DO NOT HAVE TO PAY A DEBT TO A COUNTRY WHO ATTACKS YOU.(emphasis only...i dont yell lol)

I thought it was to defend the USA?

Anyway providing no one gets itchy trigger fingers China will no doubt be the one that blinks.

Yeah, the Chinese are way too friendly sometimes ... didn't even hear them scramble a jet to escort the bosos out of their territory.


China wont win a war with the US

Likely it would end up in a bloody stalemate with the US blockadeing chinese ports.


Not in the case of its artificial islands.


with the US blockadeing chinese ports.

Along with developing their own navy.

My guess is, the CNO United States Navy, and CINCPACFLT, have been making, pardon the pun, waves around the Pentagon.

My guess is the new Chairman of the joint chiefs got a little/lot tired of it, and went to his boss, Mr. Obama, and said, essentially, we need to let China know who the big dog still is in the Pacific...and shut these two up.

Or words to that effect...

I am almost positive we will have a republican President and cabinet in 2016...


Question is will we be at war yet...

It is shaping out like this china, North Korea,Iran, Russia and some south American countries vs. NATO.

originally posted by: Xcathdra
Well if we want to tie in the end of the world prophecies all we need to do is take a look at who the current secretary of the navy is.

I see that. That is kinda creepy..

It just looks like to me the chess pieces are lining up.

There is no way that China picks a fight with the US Navy over this.

Way, way too much to lose. The U.S. certainly isn't going to start the shooting. The Iranian airbus incident is ingrained in their psyches. They'll let the badguys start the dance music.

This will be nothing more than showing the Chinese that they're not the big dog in the Pacific. Not even off their own shores. The big dog is still Seventh Fleet, and its affiliated forces.

posted on Oct, 8 2015 @ 04:23 PM
link
We have done this before and we will keep doing this. When we do China normally announces that the US has special permission to pass through its waters but, that nobody else has better try. We do these all over the world in illegally claimed sea zones. And right now China and India are both competing against each other for US investment and trade. Notice the back to back visits by both India and China's leaders to the US, both on a charm offensive with nothing but, praise for the US. China taking on the US directly is extremely unlikely. The danger comes if China ends up fighting with a US ally like Japan or the Philippines or even a good friend like India. Or an ASEAN nation like Myanmar or Vietnam since the US has several allies in ASEAN. Those are where likely trouble would start. Likely both the US and China would try and contain such a thing to limited engagement in a certain area. 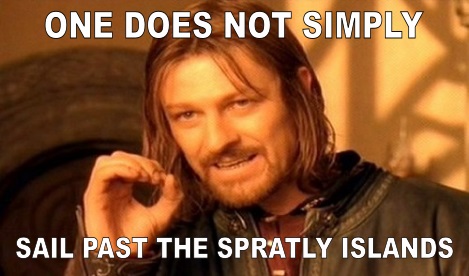 But in the case of the US Navy, yeah.

The best thing China could do or say is absolutely nothing, but we'll see about that.

Not in the case of its artificial islands.

Has it ever occurred to you, that since they are able to build these Islands ... that the Chinese land mass is actually extending out to the southern China sea? It means, that the Islands are being build on the China land base ...

The US has always been wrong, arrogant and obnoxious in these matters. China is right, they just lack the balls to stick to it.

Likely a lot of forces are currently being tasked against RU assets. So in this act, we will see to what degree China supports RU....if their "ally" is worth causing an incident with the USN.

Has it occurred to you that international law prohibits what the Chinese are doing in terms of creating sovereign territory out of nothing?

in this instance China, and you, are wrong and that's based on international law and the UN.

An EEZ (exclusive Economic Zone) does not impart national sovereignty. It allows the resources in the area to be claimed and controlled by the nation itself however it cannot restrict freedom of movement on sea nor by air.

Creation of an island does not create sovereignty.

The area China is trying to claim, the South China Sea, are in fact established international Sea Lanes used for commerce and navigation. 5 Trillion dollars + flow through the area China is attempting to claim.
edit on 8-10-2015 by Xcathdra because: (no reason given)

posted on Oct, 8 2015 @ 06:29 PM
link
a reply to: Xcathdra
Isn't it a little ironic to have a citizen, from one of the few country's not legally allowed to enforce a given law, quote said law?

The US has no legal authority to enforce UNCLOS. Enforcement of EEZ is by UNCLOS member states (Article 74). Something the US is not.

It is also why the US has done nothing, literally nothing, about this expect fly by and wave fingers. Just like they are planning to do now.

The US has recognized and abided by UNCLOS since 1994 (however it has not been ratified).