Syria's army and allied forces, backed up by the Russian Air Force, have launched a major ground operation in the western parts of the country.
“The Syrian army and allied forces began a ground operation in the northern parts of Hama Province ... with fire cover from the Russian air force,” a Syrian military source said on Wednesday.It is said that a range of militants, including terrorists from the al-Qaeda-linked al-Nusra Front, are active in the area.

So i did a bit of looking around on who those "allied forces" really are..

Hundreds of Iranian troops have arrived in Syria in the last 10 days and will soon join government forces and their Lebanese Hezbollah allies in a major ground offensive backed by Russian air strikes, two Lebanese sources told Reuters.
"The (Russian) air strikes will in the near future be accompanied by ground advances by the Syrian army and its allies," said one of the sources familiar with political and military developments in the conflict. 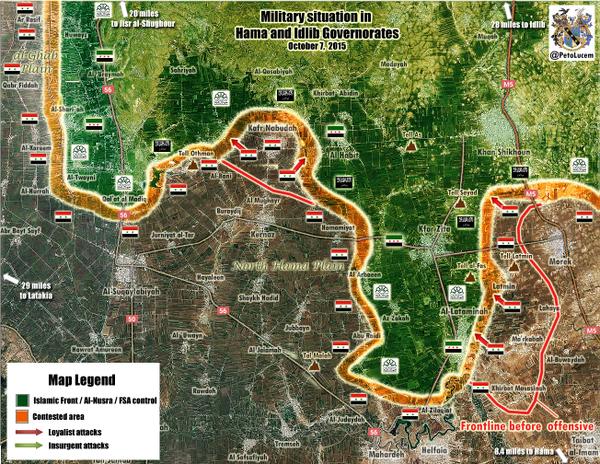 Yeah, it sucks doesn't it?

Death for death's sake, money for nothing!!

posted on Oct, 7 2015 @ 03:18 PM
link
I wish them luck. Time to get rid of these foreign mercs and return peace and stability to Syria. Time will tell. 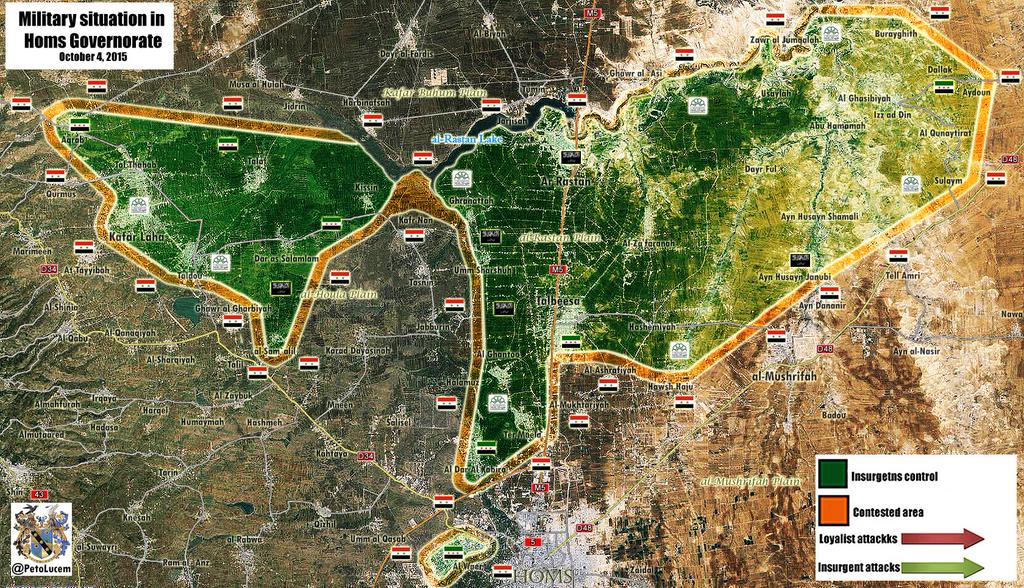 They are basically going to be wiped out. Not sure how many of the Rats are in that encircled area.

originally posted by: tsurfer2000h
a reply to: neo96


Hezbullah is as much as a terrorist group as Black Water is. One fights for religion/nationality, other fights for anyone who gives them money. Attempting to equate both sides as terrorists is stupid and incorrect. Assad is without a doubt a million times better than ALnusra/FSA/ISIS and even morally saner than the western govt.
edit on 7-10-2015 by maddy21 because: (no reason given)

Russia should overthink who it supports. This map suggests that most of Russia's airstrikes hit the other Rebel groups (FSA, Nusrah, IF):

Also, Russia doesn't help Syria because they love Assad that much... they just want more power and influence there.
edit on 7-10-2015 by Kemal because: (no reason given)

Iraq has already asked for help from Russian Air Force. Putin played an extremely smart game. He patiently waited until even the US govt. was beginning to get sick and tired of the FSA. Then he took action leaving even US to just reply with nothing more than empty words looking helpless.
edit on 7-10-2015 by maddy21 because: (no reason given)

oh no, no, no... They wont be going into iraq to be saviors.. They will go in there to conquer it... This is about oil and position, nothing else..

That is what Hezbollah, and ISIS ARE.

Tasked to do one thing.

Keep the middle eastern billionaire oil oligarch's flowing in the $$$.

posted on Oct, 7 2015 @ 03:36 PM
link
We had about a 6 month window to help moderates in Syria... Then about 6 more months the moderate revolution could have been salvaged.

After a year.... We just funneled money and weapons to hard core extremists...

I hope order gets restored... And I don't care who does it.

originally posted by: Bicent76
I find it interesting Syria, is the catalyst for this conventional war...


Apparently it is prophesied in the biblical texts. The Middle East is the catalyst. What a totally crap region of the world to start a war.
edit on 7/10/15 by Cobaltic1978 because: (no reason given)

Hezbullah and ISIS aren't really the same. Infact Hezbullah is very popular in Lebenon. Their Ideologies and their goals are very different. Hezbullah is purely religious and Nationalistic.

Hezbullah has been demonised in the past due to its opposition with Isreal and U.S. Hezbullah is also militarily very very proficient. Both cannot be compared at all. ISIS may be payed and funded by U.S but those who join ISIS are extremists.

That is good news indeed, that the Syrian and allied army are making progress in the fight againts IS.

But I pity the civilians caught in the crossfire. It's better to do this now and restore some stability in the area.