'No opposition ready to lead Syria now' – US Intel ex-Chief

originally posted by: gspat
The saddest thing is, if there is no one to take over once they do in Assad, what are they doing trying for a regime change in the first place?

Haven't they learned from the examples they created before that just taking the leadership out and hoping for the best hasn't really worked out too well?

Or maybe that's what they were planning?


I think the world would have put up with a coup where America 'disposed of' Assad and installed a puppet leader. But they have not done that anywhere. Their ideology seems to be destabilize the country to the point of collapse through all out war and mayhem seems to have come from the Underpants Gnomes 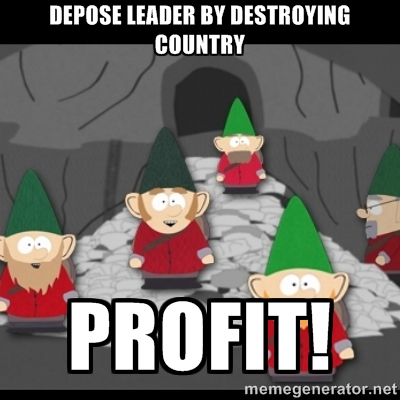 originally posted by: khnum
a reply to: Willtell

Just a pointer to someone here with half a clue or more head to www.wikiarmy.com today VeteransToday.com Senior Editor claims the head of ISIS is General Paul E Vallely Ret of NSA and US psychological warfare school fame