This is not a serious post, I.E I am not striking up a harsh debate. This is an easy, maybe a bit long, but fun read

Okay, so how many people here have heard of a website called The Lad Bible? It's a pretty un-serious website that offers daily doses of Ladness, humour and other goings on in the world. It's not limited to "Lads" though, my girlfriend and many other girls I know love the website. They also sometimes post on serious stuff, but mainly to inform and not have an opinion. It's an easy read and kills sometime in the evening if you are looking for something to have a laugh at.

This morning, whilst having a browse, I came upon a post that was discussing a VERY long but interesting Facebook post from an American who has recently visited us. And he decided to post a comprehensive list of the differences between the UK and the US. The reasons I find this list worthy of posting are as follows:

1) My dad immigrated to the US some 20 years ago, he is now a fully fledged and proud American citizen, yet when people ask him the differences between the US and the UK, he has always found it a little difficult to go deep into the differences (Mainly because there are quite a lot and they sometimes seem mundane).

3) People at home ask me the differences, and again, I get the same problem.


So I thought, for some clarity, humour and to get people smiling, that I would post his list here. For the sake of privacy (There is nothing stopping you from going on the website and finding out who this guy is yourself, as apparently it has gone viral) and the fact I didn't want to break any rules.. I have hidden the guys name and face.

Heads-Up some of the items on his list do include serious matters, such as guns, health care and the very important topic of putting vinegar on chips! (British chips). But can we please avoid this turning into a political debate? As most of the threads surrounding guns etc. lately just turn into a war of worlds and nothing positive ever comes from it.

Anyways, enjoy and tell me your favs! 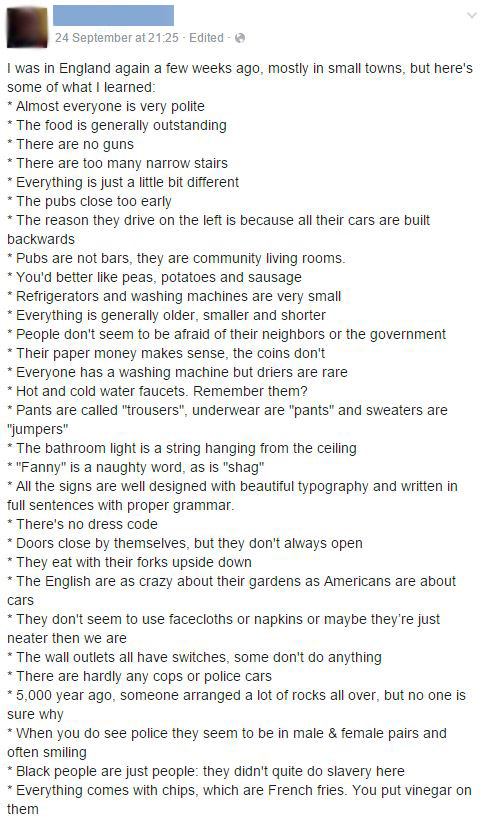 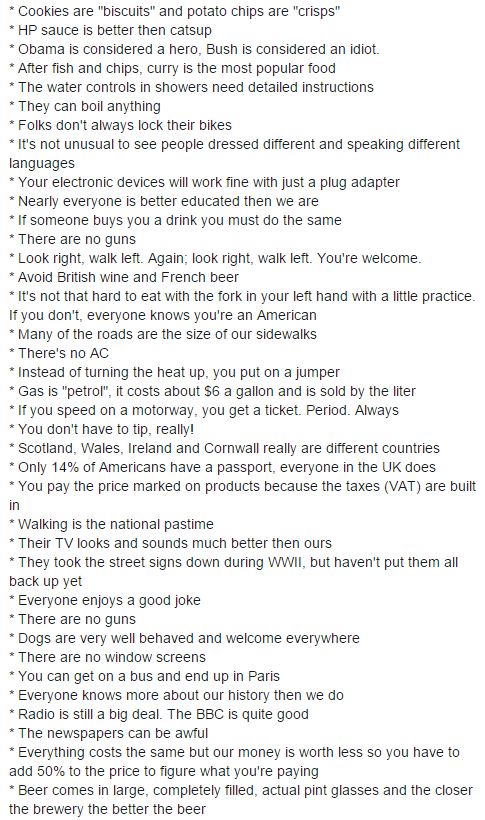 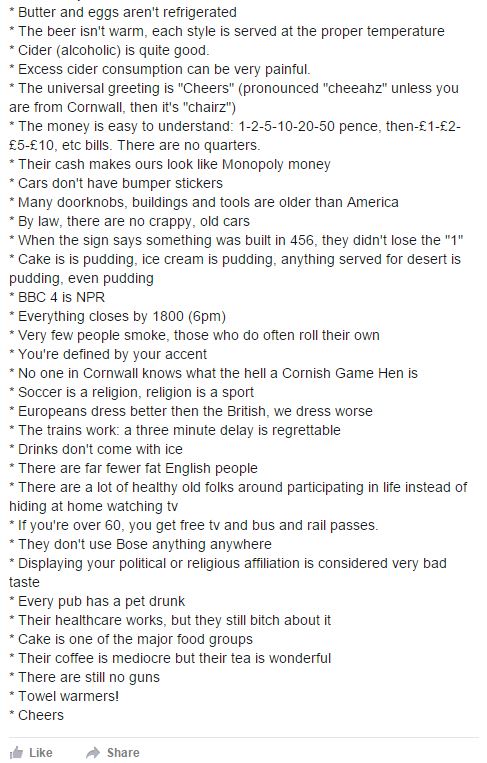 originally posted by: brace22
a reply to: skunkape23


Too much is always better than not enough.
I like drinking in the sunrise. If I want to.

I would like to say I like drinking in the sunrise, but usually over here it goes from night to dark clouds lol

However, I prefer British to English. It's slightly annoying to me that people from abroad (or foreigners to us British!) call everyone from Great Britain, English, no matter what part of the country they're from. We are British!!!

Having said that, to us British, there is a distinct national identity as well if we come from Wales or Scotland. But please use British and not English when referring to people from the UK!!

Sorry, I didn't mean to offend you!

But, as this list would include items that are indeed British, not specifically English, I will change the title.

Again, apologies and no menace involved

posted on Oct, 7 2015 @ 02:51 AM
link
I remember being late for a connecting flight through Heathrow's Terminal 5...the British Airways folks were everywhere, and even though our flight wasn't a BA flight, they kept us moving through the terminal and helped us find our gate. Everyone was super friendly and nice. I honestly expected Dr. Who to pop out from around a corner and say, "ello!"

Then we landed in Paris, and everything went downhill from there...I swear the French designed Charles De Gaul airport to be intentionally confusing to frustrate people from other countries. The French are the masters at the subtle troll...

They may lose your luggage, but they sure to do it gracefully at BA

On my 16th birthday I was flying BA out to Newark on my own. It was my first flight without a chaperone, obviously because I just turned 16 and if you are younger than that you need one. (You did back then).

I dropped a hint that it was my birthday, and the lovely lady gave me a smile when she passed me my ticket and guess what I got...

posted on Oct, 7 2015 @ 02:56 AM
link
Oh, and the time I actually got to spend in London I remembered people would carry around shopping bags from Harrod's. It was like some weird social status thing to be seen with one of those green bags.

Nice! I'm pretty much convinced that ANY airline that isn't American is nicer. I flew Condor from here to Frankfurt, and even in what was "economy" class I got all the free beer I wanted, all the food I could eat free, and even nice hot towels. The
seats were roomier and the in-flight entertainment was also free.

The flight attendant looked at me oddly when I tried to pull out my wallet to pay for my beer, and I gave her a shocked look when she asked me if I wanted another when she saw I had finished my first one. I caught on after that, and her and I made sure I was able to fall asleep for the 12 hour flight

Oh you are so right! It is ridiculous there. When I was at school all the popular girls just had to have one, even though they were stupidly expensive. Most of the time some "Guy" who had "Left over stock" would sell them haha.

I was there recently actually, they are so darn expensive. But if you think that is bad, did you see how expensive some of the dinnerware was? Thousands for a plate you will no doubt eat Dominos off of at one point haha.

I have only ever flown British or American based airlines. Not by choice, it's just the way the cookie crumbled.

However in America's defence, I flew Delta not too long ago. And it was lovely. Real nice people, nice flight Couldn't fault it!

I think international flights must be nicer...domestic flights within the USA ... the seats are only 17 inches wide. I'm a small guy at 5'5" and 150lbs, and even *I* feel cramped!

posted on Oct, 7 2015 @ 03:11 AM
link
that is a very amusing list. loved to read what you observed and with most i agree although it is a long time since i've been there

maybe things have changed, or maybe it is true from an american perspective, i'm not sure, but there is one thing i definitely do not agree with and that is that food is generally outstanding. but further down i read, that you better like peas potatoes and sausages. that's more like i remember. and also, yes, they boil a lot.

aren't the british so funny with their fork and knife. everything has to be piled up on the back of the fork. even the peas.

but the british are lovely. i so do agree that they are well educated and fun.

I have never flown a US domestic flight. Although I should be in the next couple of years as my father and I are planning a trip to the South

I will be honest, I have not heard great things about your domestic flights. I guess I can judge it better when I experience it.

Regarding the food. You have to go local to get the great food here. If you go to a chain restaurant, most pubs (My local does amazing food) and just general supermarket food, it can be slim pickings for something amazing.

However, home cooked local food from markets etc is genuinely amazing. We bake a lot here, and our cakes and bread can be stupidly good if they are home baked.

The boil thing is funny. I have had so much boiled food in my life I refuse to have anything that is boiled now, apart from pasta! I love pasta dishes.

But generally, the food you grab in the shop is standard, not great. Local produce cooked fresh in your home or from a small little shop can be amazing.

I will give a gloss on some of these.

"Everybody is very polite".
Yes, it is part of the etiquette that you are rude about people only behind their backs.
In fact you will get contradicted if you say something negative even about yourself.

"The coins don't make sense".
I would understand that judgement better if it was made in the days of "old money", as we oldsters call it; that is, twelve pence in the shilling, twenty shillings in the pound. The "Half a crown" coin was two and a half shillings, also known as "two and six". The "thruppeny bit" (three pence) still provides rhyming slang. I believe a northern mother might still call her son a "daft ha'pporth" (that is, worth only half a penny).

"You are defined by your accent". Yes, and also socially judged. "No Englishman can open his mouth without making another Englishman despise him". At least foreigners escape being laughed at for sounding too posh, too working class, too provincial.
Word choice also brings social judgement. E.g. that word "pudding" is actually a potential snare; you may be judged on your choice between "pudding", "dessert", and "sweet".
A couch is a sofa in the south, a settee in the north.

On the question of "pants" and "trousers", he forgot or did not notice that the "vest" is also an item of underwear. Mothers demand that they should be woolly. So an American can walk around in public in his vest and pants, an Englishman can do so only in nightmares.

"Everybody is very polite".
Yes, it is part of the etiquette that you are rude about people only behind their backs.
In fact you will get contradicted if you say something negative even about yourself"

Although you are free to your opinion and I respect that from what you have said regarding the other parts. I have to contest this. I personally, do not speak kindly to the face and badly to the back. I believe you are judging this by your own personal experiences. I am nice to people regardless, and if I don't get on with someone, I don't bad mouth them. I just, well, ignore it. You cant get on with everybody.

Anyways, that's just me sticking up for myself. Regarding vests. I have never worn a vest at home... It's too cold to walk around in one! Although current fashion trends this Summer saw all the hipsters walking around in vests, shorts and flip flops with their hair buns and beards!

So, Brits do actually walk around in vests. I personally don't, unless I around a pool somewhere nice