Slavery started in America with the Native Tribes

posted on Oct, 5 2015 @ 11:01 PM
link
Studying history is one of my interests in life. I realized the other day much has been made of the rather recent phenomena here in America of African natives being outsourced by their countryman in forced labor in the American South. This rather recent set of events was no doubt atrocious for many innocent people who were involved in this tragedy. So recent in fact there are many sores that are far from being healed as a result.

Americans, the native ones practiced slavery for hundreds or even thousands of years before the Europeans arrived in the Americas. When one tribe raided another tribe's territory and took prisoners they were often treated as slaves. Some spent the rest of their lives as slaves of their captors.

In Europe during the Roman conquest the same was true then. If you found yourself walking on a Roman road with your wife, and children you might suddenly find yourself a slave and sent to fight in the pits while your wife is made a whore, and your children are sold to perform who knows what labor or vice.

Much misery and suffering of slavery exists even today when you read headlines about a Pakistani woman in New York escaping from a Saudi royal's mansion in the middle of the night fleeing for her life. When you read of containers full of starved and dead Chinese people found headed for a sweatshop in the garment district. Slavery is horrid but has been around a lot longer that the American Republic and is not any smaller of a relevant issue today as it was back then. People do horrid things to others but their descendants are not responsible for the conducts of their predecessors and that is the fact of the matter.

While I feel compassion for those my ancestors might have harmed I have no guilt or shame about those situations that happened in the past. I take responsibility only for what I have done to my fellow man not some past persons who share only a common ancestor with me.

posted on Oct, 6 2015 @ 12:14 AM
link
Never "feel" for "slaves". If they didn't die for thier own "freedom "? ....They obviously didn't hate "slavery" that much. Blacks, sold blacks as "slaves". Whites have enslaved whites. American Indians enslaved eachother. ..all day long..everyday. Don't get emotional about it. The "white" English tried to starve my white, Irish ancestors... What doesn't kill you makes you stronger. Don't get all emotional about history or facts. You can't change yesterday. "Ignore" it. It's a non-issue. Don't pay for something or someone, you never bought.
edit on 6-10-2015 by murphy22 because: To add

posted on Oct, 6 2015 @ 12:32 AM
link
a reply to: murphy22
Wow, are you for real? I don't have strong enough words to express how disgusted I am by your statement. What doesn't kill you can break your spirit or a minimum cause serious mental and emotional scars.

Perhaps you don't understand the tactics used to keep people in slavery. Just some of the tactics used to keep people enslaved is include using the persons family as leverage. Using food and sleep deprivation and in general wearing them down, which can make it hard to muster up the will to fight back. They use brainwashing techniques. They convince the person that the life they have is far better than it could be. Many people are raised into slavery and don't know that there is anything different out there.

Ever hear of the terms Gas lighting, or Stockholm syndrome? Yes I feel for slaves. I try to restrict my consumption of slave made products because slavery is still alive and well, and a widespread problem even in modern times. No, we can't change the past, but we can try to make a difference for the millions of people who are enslaved today.

What I am informing you of is that I don't accept responsibility for what I have not done period. What has been done to many peoples for many thousands of years has been tragic. Lets get past it like a bunch of mature and creative individuals. How does the actions of people I have never known impact what parts of my life I control?

How far back do you want to go on the issue of slavery? If you read Hammarabi's brilliant code written 1750BC you will see it covers the treatment of slaves and how they may become freemen etc.

Unfortunately slavery seems a part of our nature - (please don't ask my wife about this issue) as she stll thinks it goes on today on the odd occasion (Huh although I tell her certainly not, she's not entirely convinced).

In the UK we are still technically serfs because we have a ruling monarch, whom fortunately has her wings clipped, but if you look at the way a government can marshal up an army to fight for some cause whilst they sit safely behind a desk back home, nothing has changed you are still a slave in most respects because you have to go off and risk your life.

I do think though that there are a lot of things in the history of our world we need to get over and ensure we are aware of the consequences of certain actions.

Fitting within the narrative of the OP I would just go back to the 1400's Americas and just a few hundred years before. My point here is that the Natives of the Americas were adept at slavery of their own kind at the same time the African Natives were enslaving their own. It suffices to say that slavery is both as atrocious as it is historically prevalent on every continent at any given time in our human history.

I was interested to hear 40% of compensated British slave owners were women. Scots had a higher percentage of slave owners than English. Jews had massive involvement in large scale slave trading.

Now we have cases of slaves being kept in in the centre of traveller camps and houses full of trafficked migrant slaves used for monotonous field work etc.

Can we name women, Scots, Jews, travellers and migrant gang masters as slavers?
Or doesn't that fit with the brainwashing agenda?


While I feel compassion for those my ancestors might have harmed I have no guilt or shame about those situations that happened in the past. I take responsibility only for what I have done to my fellow man not some past persons who share only a common ancestor with me. 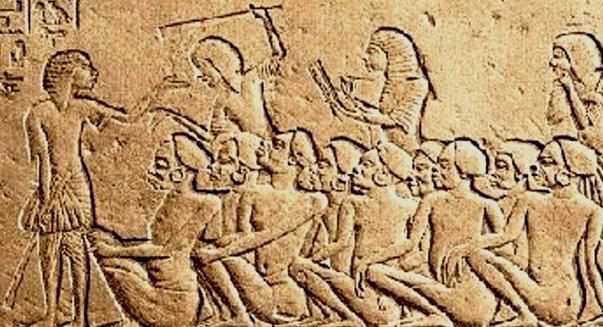 Slavery supposedly goes back to ancient times, with the Sumerians, Akkadians, and Babylonians, etc.

Some articles I found:

From Sumerian Gods to Modern Day: The History of Slavery
- www.ancient-origins.net...

The Sumerians
- www.fsmitha.com...
"Sumerian kings sent men out to plunder people in hill country, and they acquired slaves. The Sumerian name for a female slave was mountain girl, and a male slave was called mountain man."
edit on 6-10-2015 by nOraKat because: (no reason given)

posted on Oct, 6 2015 @ 03:13 AM
link
In addition to the valid comments about slavery being as old as "humanity"-
The animal kingdom had slavery locked down and perfected long before Humans.

If we guesstimate that have Ants been around for 110 million years it might be fair to say similar behavior has been evident in various types of Slave Maker Ants for at least half of that time.

You might even be able to argue that the Parasite/Host relationship exhibits numerous similar traits and who knows how old that is or how significant this is in the overall phenomenon of evolution.

posted on Oct, 6 2015 @ 04:17 AM
link
Science has shown that war, poverty, stress of all kinds can damage DNA. Guess there is something to be said for living peacefully.

originally posted by: Gestas
So because it happened earlier than you would like for your agenda we have to Ignore it?

Exactly. So why is it that we continually hear about white people as slave masters, but seem to ignore slavery (or at least downplay it) when non-whites are the perpetrators?

posted on Oct, 6 2015 @ 05:48 AM
link
We'll, lets face it, the native americans and the africans did not really improve their way of life much, so their slave ownership, along with any other wrongs, are not a big deal apparently. Because the white man was greatly successful in developing great nations and basically raised the standard of living for themselves and basically at least half the world or more along with it, (im an american on the edge of poverty and my life is exponentially better than thst of a King just a couple hundred years ago) everything they ever did is put under the microscope. So their slave ownership and wrongdoings are automatically the most insidious, darkest form of evil.

Yep! I'm for real! So basically, you have resolved to not be a "slave"? Good, good for you! Don't worry about not having "strong enough words" they'll come when you actually need them.