Seems to be a lot of confusion about this. Understandably though, 4chan is one of the most confusing and disgusting places on the internet.

1. someone posts a warning on 4chan saying people shouldn't go to school in the northwest

2. some idiot kills 9 people in a community college in Oregon

3. another idiot on 4chan thinks it would be "funny" to pin the shooting on a user named eggman

5. turns out it was another guy all along, 4chan posters are congratulating eachother for succesfully trolling everyone

6. someone posts a warning on 4chan saying people shouldn't go to school in Philadelphia


That's about it in a nutshell.

You still have to be willing to USE it. I see it more as a good day to skip class. I'd normally not advocate skipping a class, but sod it.

As much as I don't want to say it. It looks like a bunch of kids and trolls trying to be edgy. What gets their rocks off, is like after 9/11, no one is going to RISK that its not real.

Sounds like a good strategy to put special temporary guards on duty just for a few days. This might be the solution to this problem. While they find and prosecute the people that started the threat...

posted on Oct, 4 2015 @ 10:21 PM
link
If they're going to issue official warnings about every threatening post on 4chan it will just encourage the trolls even more.

Never been on 4chan lol.
ATS is the only one for me (tm).
(yes owners send me a mug or t shirt for that comment).

Don't bother with 4Chan. It is the athletes foot of the visible Web (worse on Deep/Dark Web, but you expect that). These kids, and trolls (some are probably at least my age (40s)) get off on thinking they can influence people. What would fix the idiots would be the FBI tracking a couple down, and using terrorist laws against them

originally posted by: Hyperia
so what is Hiro and Beta?


I have no idea.
I took a look at the thread @ 4chan. They seem to use the term 'Reeeee' a lot too.
I figured out what 'Chads' and 'Stacies' are.... Alpha males and females, respectively.

PHILADELPHIA (WPVI) -- The FBI and ATF are warning about a non-specific threat of violence against "a university near Philadelphia" on Monday.

The FBI released the following statement over the weekend:

Out of an abundance of caution, the FBI Philadelphia Field Office notified local colleges and universities of a social media posting which threatened violence at a Philadelphia-area college or university for Monday, October 5. No specific college or university was identified in the posting. We encourage students, faculty, and employees at area colleges and universities to follow the guidance of their campus security officials. The FBI will continue to work with our federal, state, and local law enforcement partners to investigate threats of


FBI, ATF WARN OF THREAT OF VIOLENCE AGAINST 'UNIVERSITY NEAR PHILADELPHIA'

So I was just searching #Shooter on Twitter when I came across a guy stating he was at Temple University using the #shooter in his posts and I decided to search Temple Shooter and this story came up.

Anywho...hopefully this guy is not going to do something, but if it happens, it appears it has not happened yet but is a credible threat.

I wonder if I just happened upon the guy from 4CHAN that is stating he is going to do it?

If anyone can search or find anything on this it may be useful to do so methinks. Story says threat was called in and was supposed to go down around 1PM today.

Here is the screenshot: 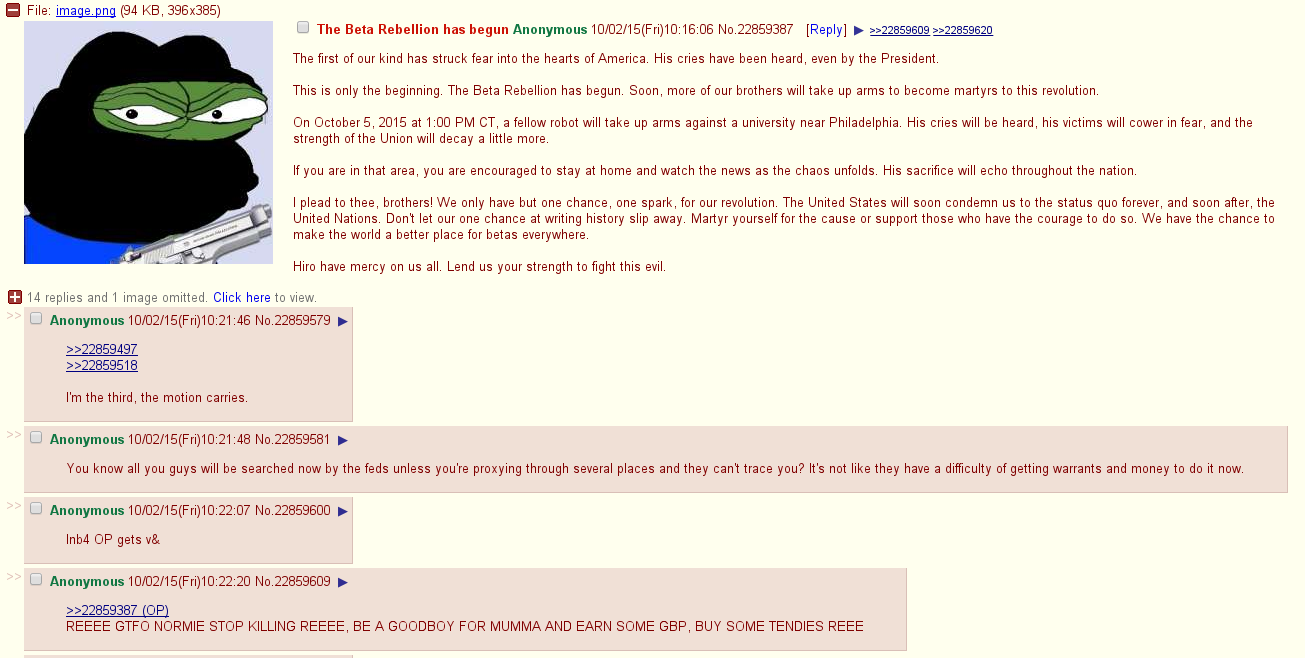 Odd reply from that dude too: 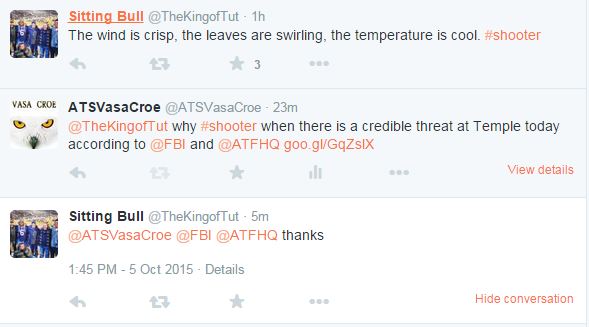 originally posted by: FamCore
a reply to: Vasa Croe

Not sure about Hiro, but here is a link to Beta:


Beta Uprising is a term used by individuals who percieve themselves as “beta” (socially awkward, unconfident people with low romantical/sexual success) in order to instigate a violent uproar that would change their social status. The term, used both ironically and unironically, gained popularity on 4chan’s /r9k/ (ROBOT9001) board, often accompained by Angry Pepe and Wojak images.

so "betas" as they like to be called are people who identify themselves as "socially awkward and lacking with their sexual experiences", therefore they justify killing anyone who they see as an "alpha" (someone who isn't socially awkward or does attract the affection of others).

posted on Oct, 5 2015 @ 01:18 PM
link
Maybe there was a typo in the bible and it should have read 'Blessed are the geek for they shall inherit the earth' a reply to: FamCore

posted on Oct, 5 2015 @ 02:31 PM
link
This makes a lot more sense as far as the Oregon shootings rather than anti-Christian, pro-ISIS, Satanism, etc.

You may well be right but I've seen it explained as coming from 'an hero', a spelling mistake from an article about a kid killing himself. Maybe hiro is a combo of the two in this context?

Either way these people are nutters who need locking up.