So, the September 2015 doomsday predictions came to nothing, can we end the stupidity?

The bottom line is what really annoys me is every time something like this happens there is no apology from the person who started the thread, or who gave their supposed divine prediction. They just disappear and reappear 6 months later to start a " bunkering down in Denver airport something going to happen October 10-15th thereabouts" thread.

This goes on and on, yet what annoys me is how these people are given any legitimacy, and are given a thread to sprout their nonsense in, and people string them along with comments like "just to make sure i will get extra supplies".
Either people who respond like that are trolling the op, or they really have short memories, as the last doomsday failed thread is usually from a few weeks before hand.

What do people gain from writing this rubbish? No man or woman on earth can predict what is going to happen, if they did they would win the lottery, and before people say well they cant use it for personal gain, well why not win the lottery and give it to the homeless!

So the point of this thread is, why is any legitimacy whatsoever given to these starters about a certain dates to look out for because supposed extinction events or asteroids or nukes or whatever is going to happen.
And also, i feel that the people who start those threads should publicly apologise for starting the thread and wasting our time, or be banned.

I mean to sound harsh, but i am totally fed up to the core with these doomsday dates, it isnt original or even mildly amusing anymore, i mean nowadays they do not even give an exact date its always an approximate like late august or 22-28th sepember, to give themselves more of a fluke of being right.
edit on 4-10-2015 by lamplighters because: (no reason given)

They never come back do they? I did see one in the 2012 thread something ewok his name who did come back and say he was mistaken but the latest dude who attempted to tell us has not been seen.
A few hundred years ago these liars and charlatans would have been put in the stocks and shamed.
Pity we can't find these idiots who wish to instill fear into other peoples lives.

posted on Oct, 4 2015 @ 06:31 AM
link
By the way sorry the thread had many spelling errors due to auto check on, ive corrected it now, sorry if it made no sense at first.


I wont bother with the Nov. and Dec. predictions till you calm down a little

The boy who cried wolf will eventually get his day in court......I hope.

originally posted by: SecretKnowledge
a reply to: lamplighters


I said in my second post that i was using an autocorrect and it messed up
i have corrected it now though.

originally posted by: stosh64
a reply to: lamplighters
It just moved to October, didn't you get the memo?

You are having a laugh right?
that is the same person who did the September one?
Honestly, i am so baffled as to how people seem so desperate for a doomsday event.
edit on 4-10-2015 by lamplighters because: (no reason given)

originally posted by: Mianeye
a reply to: lamplighters

Exactly
when it does eventually happen, they wont be here to get bragging rights

posted on Oct, 4 2015 @ 06:41 AM
link
I think some do it for the same reason people watch horror movies. That feeling of "safe fear". They like the little tingle of fear and the "what if", but they know, deep down, that nothing really bad is going to happen. If they did, they'd be buying supplies and heading for the hills. What do they do? Day after day, they stick around spouting the same message. And when it's over? They go looking for the next Big Day and start the cycle all over. That's why Rapture prophets do so well. They can point to any number of things as proof and when they're wrong, fall back on the "No man knows the hour or day" "God did not show me blahblahblah" routine.

This is what should happen to them: 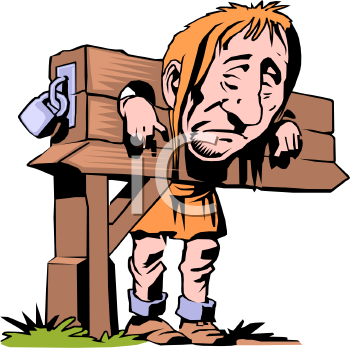 ATS needs a virtual set of stocks and lots of free rotten vegetables to metaphorically throw into the faces of these false prophets of doom. It is doom spam.

Yes, my post was in jest. I cant believe that Renee Moses is still at it. She has 3 days till her next prediction is proved wrong. And people STILL FOLLOW HER!!
Hell, people still follow Ronald Weinland, and he predicted the end in 08', people STILL follow him and his 'NEW prophecies'.
I do believe in biblical Prophecy coming to fruition someday but I really don't give it much thought anymore. It happens when it happens.
I just try and stay on daily speaking terms with the BIG Guy.

The end of the world has been postponed until November* due to scheduling conflicts.

The memo went out on Sept 24th. Please check your inbox or your spam folder, you should have received it.


Thank you for your continued interest in the Apocalypse. We are dedicated to making this the best end of the world ever.
(*We reserve the right to reschedule the Armageddon at the last minute with no notice.)

Sadly, most of these prophecies usually came from self proclaimed learned Christians and that reminds me of Jesus' own words in Mathew (7:22-23)


Then I will tell them plainly, 'I never knew you. Away from me, you evildoers!'

originally posted by: SecretKnowledge
a reply to: lamplighters
Lighten up there its all harmless internet fun

I find it extremely ironic that you would make a comment like that, in a thread you created to complain about other peoples vocabulary...... Just saying.

originally posted by: watchitburn
a reply to: lamplighters

(*We reserve the right to reschedule the Armageddon at the last minute with no notice.)

I'm in a weird mood today, but that comment reminded me of this clip.

posted on Oct, 4 2015 @ 07:11 AM
link
I never say they will happen. I do find them interesting to watch. I've been around long enough to see several of these things come and go.

This one had some interesting patterns and convergences connected to it that made it spooky, so I watched it harder than some of the others admittedly.

And given the way things are lining up in the ME, it's still too early to say that nothing is happening. How many would have predicted just two years ago that they would see a Russo-Iranian Alliance operating in Syria and bombing Damascus for example? That gets close to prophetic on a couple of counts.

As for YouTube prophets, I don't pay attention to the dates, but they do sometimes have other interesting things to point out.

One of "those threads"…

Not much point to convincing false prophets of anything.

Thank you for this post. I have gotten 2 warnings in other doomsday threads because I did not manage to put it in nice words (and therefore deleted).

It's exactly this, what you described: once the doomsday is over, suddenly all the doomsday screamers and followers just disappear. You hear nothing, you see nothing anymore. They are just gone. It's like they never existed. As if they try to hide in silence and shame, hoping people forget all their lies (or so called prophecies) - only to come out again next year.

With september having dozens of threats and topics, I expected at least one of them realizing how absurd this propaganda was. Or some other justification for wasting our time with this. But nothing. Not a single apology. While the "recent posts" button always listed the doom prophecies on the first page - 1 day after the last doomsday event should have happened - they already disappeared in the depths of the forum. I had to scroll way down to fish out these topics again. However these topics were totally abandoned...

Eventually there are 2 kinds of madness: the first one is the doom announcements and pushing, and the second is that many followers didn't care afterwards for an explanation of this nonsense by the doommongers, even though they wasted hours with it. So they are OK with others lying to them and getting away without punishment? Yes, why do I even ask... elections prove it all the time.

On the positive side, I am now free of doom prophecies.