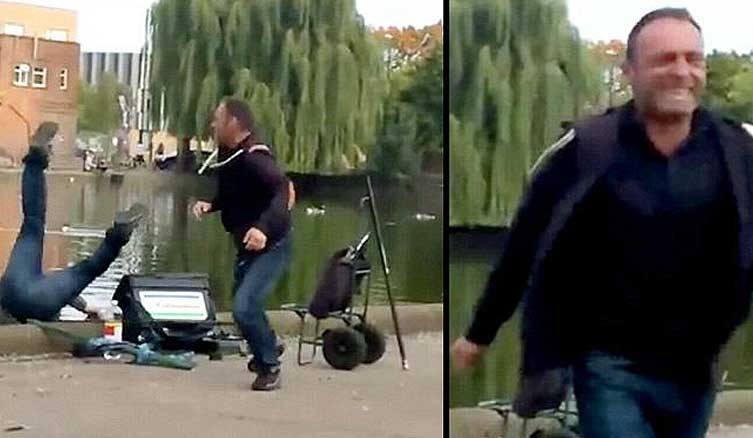 "The police are currently on a hunt for a pair of men who thought it would be a good idea to push a fisherman into a lake in Coventry. The unprovoked attack was captured in a footage that was carelessly uploaded to Youtube. As evident in the posted video, the assault was recorded by the second man as he encourages his friend to sneak up right behind the unknowing fisherman and push him out into the water.

The posted video shows that the incident happened at the Hillfields area of Coventry, right at the Swansell Pool. It was made viewable to the public last Wednesday. However, the original video was removed from YouTube. However, uploader wasn’t quick enough to delete it on time as the video made its way to a Facebook Page – “Spotted: Coventry City.” After it was shared on the page, the video was able to garner 50,000 views."

I came across this article on my Facebook page this morning. What kind of people would do such a thing to an old Man simply out enjoying a wee bit of fishing in the twilight of his life?

The mind boggles at such a stupid act of depravity which lets face it could quite possibly resulted in the poor Mans death. If there is anybody from Hillfields area of Coventry out there that can identify the person in question can call Crimestoppers on 0800 555 111.

I don't hold with grassing myself but halfwits such as this that could do such a thing to an old Man deserve to be caught and punished to the full extent of our law before they end up doing someone a serious injury.
edit on 4-10-2015 by andy06shake because: (no reason given)

I'm looking forward to the prank punishment when they're caught. Start with a stink bomb in the cell then a clown solicitor.

posted on Oct, 4 2015 @ 03:57 AM
link
They are lucky they didn't get the wrong man or it wouldn't have been so funny for them. Like an old retired MI6 or SAS guy. They deserve what they have coming! Karma will catch up with them! Pushing a friend in the water is one thing, but some poor stranger is another issue altogether especially elderly.

Thing is its not even wanes that are responsible. The person in question looks to be in his late 30s or early 40s! My point being if you dont know not to do stupid dangerous stuff like that by now, then you never will.

I hope the guys family get a hold of him/them before the Police do and somewhat return the favor.
edit on 4-10-2015 by andy06shake because: (no reason given)

posted on Oct, 4 2015 @ 04:07 AM
link
a reply to: andy06shake
"Pranking" is essentially malicious even in its "mild" versions.
The more the impulse is indulged, the more likely it is to creep up into doing actual harm.

Definitely agree considering the people responsible for such an act have already graduated to assault on the elderly. God knows what they are going to do next to satisfy their heinously perverse sense of humor.
edit on 4-10-2015 by andy06shake because: (no reason given)

I agree the fisherman should have punched the fish to death first.

(warning a couple of swear words).

posted on Oct, 4 2015 @ 07:05 AM
link
That man should have beat those two with that fishing pole he picked up when he came out of the water.

Depravity and non-sense, these two jack donkeys were at least in their late thirties. It's sad when you've got to get off on stupid inane crap like this and no one intervened, I'm sure someone saw this.

One day, these type of outlandish pranks are going to cause someone to lose their life. Than its going to be too late. Get life behind bars just so you can get a laugh. Stupidity.

Anyone dumb enough to upload a video of themselves committing criminal assault to YouTube has got to be a few pecans short of a fruitcake.

Since they failed at trying to cover up their tracks by deleting the YouTube video after it's already gone viral on Facebook I would say it's only a matter of time before these two genius' get what's coming to them.

"It's been done to me while walking down a canal.
Did I phone the police? nope I laughed it off. "

To be fair was your mobile not a bit wet at the time to be involving the Police?

"I for one If upon seeing this would have pissed myself and many here who says they would not is a liar."

But should the Man have hit his head and gone under i imagine you would also have been the first to attempt rescue?

The crap they shout at the poor fellow afterward is also out of order. He should have stuck that fishing pole where the sun dina shine regrading the Muppet in question.

It was a old nokia so it was fine.
Yeah I can see your point what If? but come on dude, catch the guys tell them off and let it be.
Yes I would have stopped laughing If the guy was hurt but he wasnt was he? just injured pride and a wet phone.
Bill the guys when caught sure but I wouldn't charge them for assault or anything.

Some people react to things differently through, i know im now playing what ifs, but what if the poor wee Man takes the incident harshly and decided not to want to go outside or go fishing again down to these fools antics. Stranger things have happened.

As to the old Nokia's, aye they were rather robust compared to today's variants.

Technically it is an assault. He creeps up behind the Man and pushes him into a pull of water while filming the incident. Good luck to them attempting to convince any judge as to it only being a prank.
edit on 4-10-2015 by andy06shake because: (no reason given)

I for one If upon seeing this would have pissed myself and many here who says they would not is a liar.


i'm a little dissapointed you say that. I dont think this is funny in any way.

Laughing is a natural reaction.
I once jumped of a moving bus head first into the bus stop, knocked myself out blood everywhere and I came around with a 80 year old laughing her head off.
We laugh when people fall over it is a evolutionary reaction to combat stress.

I once jumped off a moving bus head first into the bus stop...

I often wondered what was the root cause of all your mental debilities. One more thing I can cross off my list now...


Call me liar then. You need a psychiatrist if you think that was funny.