The Candle in the Turnup [Halloween2015]

posted on Oct, 2 2015 @ 08:52 PM
link
The crops were in and it had been a good harvest. Aodhagan brushed back the red hair from his eyes and thought to himself, Samhain must be pleased with me because of this bounty. He knew he was a good farmer and believed he was the best in the valley. He was sure the other farmers would be jealous of his offerings. Together with his wife and children they busily prepared their offering for the night's yearly bonfire.

With growing darkness they finished loading their wagon with the fruits of their farm. They were excited to once again give their offering and please Samhain to insure their success for the next season. But this year he had decided to hold back some of the better harvest for his family. They had run a little short last season. As he gathered the family together he discovered his youngest child Seaninin was missing. They quickly called for him but he did not answer. They searched the cottage and the barn but there was no sign of him. Of all the nights to run off!

Aodhagan told his wife and children to go ahead to the bonfire, to make sure their offering was made on time. He would follow as soon as he found his son. He began to frantically search the fields yelling his son's name. His son was very headstrong and had disobeyed in the past. His wife liked to say he was just like his father. And then he saw a small flickering light ahead in the dark. He made his way through the thicket and over the stone fence. There was a light ahead winding up a trail to the top of a hillock. His son was carrying a hollowed out turnip with a small candle inside. It was meant to ward off the evil spirits that would be breaking through the veil from the other side.

Aodhagan hurried his pace, for he knew he was running out of time. To save his son and his own life, he knew they had to get down to the fire. The light disappeared from sight as his son reached the top. Aodhagan was tripping and stumbling on the rocks and the plants that seemed to be reaching out to grab his legs. A deep fear gripped him as he fought his way to the top. Finally, he cleared the summit and found his son starring off into the night and then he saw the great bonfire had been lit and its flames were shooting up into the night.

He resisted his anger to discipline his son right then and there but simply grabbed him up and hurried back down the trail. He now realized with the sky overcast the only light they had was the candle and the fire off in the distance. With deep fear he made their way to the valley floor and began to run across the fields, past the sheep, over rock wall after rock wall. Somehow they managed to not fall.

Finally, they broke through the last wind row and ran to the fire. Their he saw his family starring at him with horror. For when he moved to set Seaninin down, he was no longer carrying his son, instead, he found a pumpkin. Somewhere along the trail Seaninin had turned into a lantern, a grotesgue face cut into the flesh revealed the light of the candle and exposed Aodhagan's sin of withholding the best of his harvest. Not realizing what had happened, his middle son picked up the pumpkin and threw it on the fire. At that moment the people cowered in fear as the shape of a young boy rose up in the flames and rose toward the heavens. Each year thereafter he would carve a pumpkin to remind himself to never withhold from Samhain.
edit on 06/02/2011 by grayeagle because: Correction

A great story, as always grayeagle. I used to carve turnips for Hallowe'en - it was like scooping out a rock. They are unyielding beasts.

I love your take on Samhain - a god to be appeased by the harvest, and a heartless god at that. That story conjured up all the best elements of a fairy story especially the part with the changeling. Poor boy!
loved it, but I knew I would before I even started reading.

Thank you so much! It is always such fun to write. I love your work as well and Scotland is on my bucket list! Part of my family is from there and I would so like to visit.

Nice! S&F from me

Thanks Swanne! It is always nice to hear your comments and I enjoyed your story as well! 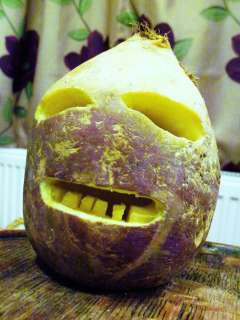