posted on Oct, 2 2015 @ 07:30 PM
link
NASA has just revealed a new and detailed image of Pluto's moon Charon. At the top is a very large basin-like feature, which is conspicuously red. The red color may be similar to that on Pluto, which is believed to be caused by tholins, which are hydrocarbons altered by long tern radiation from the Sun.
Just to the right of this is what appears to be a large, very eroded impact basin, which I have not heard described before. The upper part of the image is relatively smooth, suggesting that it has been resurfaced by geological processes.
The middle portion is riven by a very large canyon, and wide grooves, appearing somewhat like the Valles Marineris on Mars. The bottom of the image is conspicuously cratered, indicating a very ancient, undisturbed terrain. This area also contains a number of long, thin, sinuous rilles.
link to article and image, below:
www.bbc.com...
edit on 2-10-2015 by Ross 54 because: improved paragraph structure

I gasped a bit so pretty I know it is false colour but wow cheers.
Here . 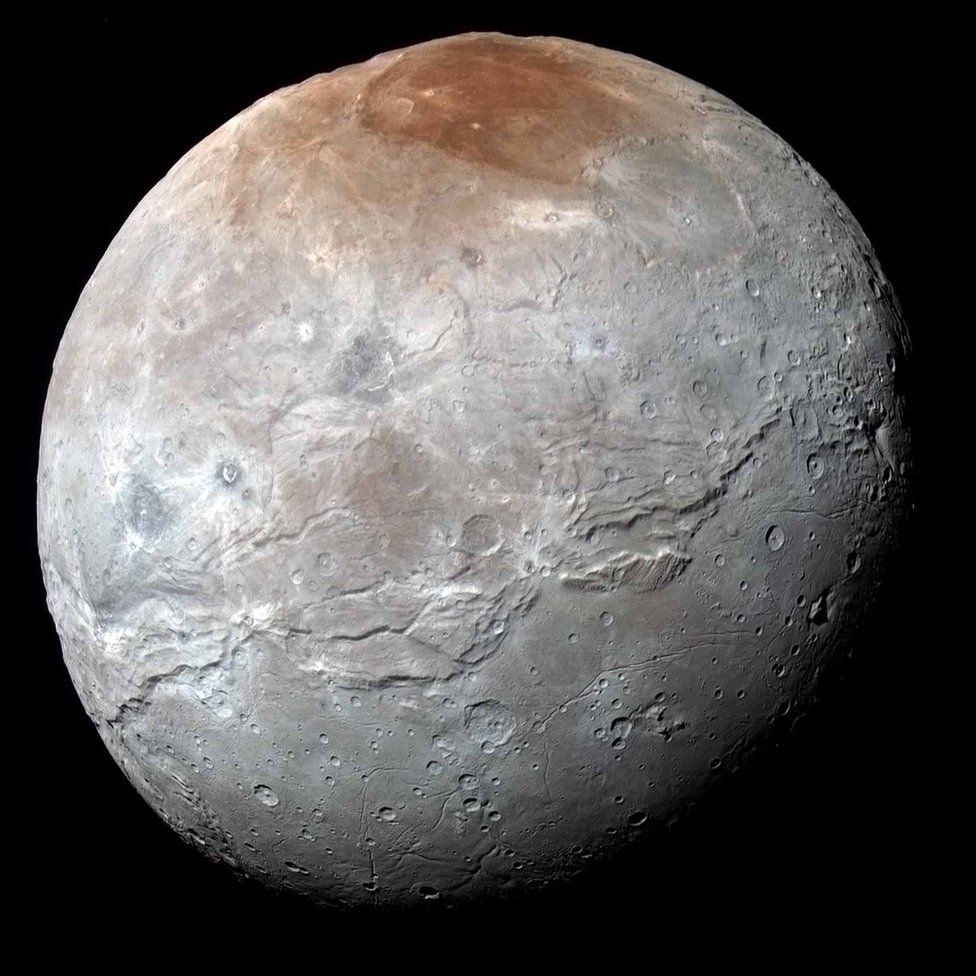 originally posted by: boymonkey74
a reply to: Ross 54

I wanna lick it I think I have PICA.


I wanna lick it I think I have PICA.

Ewww, it's a moon


originally posted by: boymonkey74
a reply to: Ross 54

originally posted by: Skinon
Awe... It's amazing to know that we are most likely the first creatures to lay eyes on these planets/moons...

To be honest, we probably are not...

Why do some planets look as though some huge giant took a spoon and tried to crack it open like an egg? I am sure I have seen cracks like Charon's running along on other planets also.

I know its a wonderful thing to see Charon as far away from us as its binary buddy Pluto but I don't exactly find it exciting looking at it. It looks dull with a bit that got too close to the gas hob. These two lumps together look like non- identical twins. I wonder how long it will be before a human flies by it and can see it for real?

posted on Oct, 3 2015 @ 12:10 PM
link
a reply to: Shiloh7
What is it about seeing something for real as opposed to seeing a photo of it? In all practicallity, to a real passer-by, Pluto and Charon will look even more dull and uniformly-coloured than on these photos, because the photos were enhanced to increase contrast and the colour palette.

If you think these images are dull, then perhaps astronomy and space exploration are not the kind of subjects you'd want to invest much time in.
edit on 3-10-2015 by wildespace because: (no reason given)