How Bernie Sanders would transform the nation

The article is talking about relative poverty (In what is a very rich country). You seemed to have missed this part of the article you linked.

"In Norway, a long standing and successful social welfare system exists. It has strong fiscal redistribution mechanisms designed to aim both at the impoverished and at a regional level. It is for this reason alone, that it is said that absolute poverty is rare."

Those nordic, northern countries are all doing reasonably well though.

Don't fall for the MSM B.S.

Those countries are just as screwed up as anywhere else.

A Look at Poverty in Norway

The world’s richest country is Norway. The population of Norway is 4.5 million people. Despite the wealth of the country due to oil commodities, poverty still exists. In the capital of Oslo, 8.3 percent of the population suffers from poverty. The populations that are affected the most by poverty are immigrants, families with children and single parents, and those who are on social security.

As of 2014, child poverty is on the rise in Norway. It is estimated that 78,000 children are suffering at this time. Three point four percent of children are living in a state of ‘relative’ poverty. In Norway, it is defined as households with income below 50 per cent of the national median.

The most visible of the beggars that Norway has been seeking to outlaw are immigrants, arrived from poverty-stricken parts of eastern Europe. During the day they line the city streets here, holding out little cardboard cups. At night they retreat to their worn-out, overcrowded box vans – ageing, rusty vehicles that might contain six people sleeping. They park wherever they can, sometimes in the middle of well-established housing areas, until they are asked to leave by neighbours or the local police.

But there are plenty of Norwegian-born homeless too, if more hidden from view. The majority of these are single mothers, victims of violence in the home. A fifth are 18-25 years old, half are addicted to drugs or alcohol, and 40% suffer from psychiatric illnesses. Most find a place to stay at night thanks to private shelters and NGOs, but some sleep on the streets and in doorways. Others go to noisy hostels paid for by the municipalities, where they stay warm but attract drug and alcohol pushers who only make the problem worse.

says that only 1.7 percent of Norwegians are in a serious poverty level and that poverty levels are dropping.

But also keep in mind that we were just in one of the worst world recessions ever, so every country on earth was effected negatively no matter what kind of government they have.

posted on Nov, 2 2015 @ 10:29 AM
link
He can get elected and say and do anything he wants, but if the banking system isn't changed somehow, it will only amount to generating more debt.

Some programs that benefit everyone will never operate at a profit because they just can't while still being available to everyone.

That's probably going to be the biggest reason he doesn't get elected, if he doesn't.


berniesanders... .com/press-release/sanders-breaking-up-big-banks-restoring-glass-steagall-are-key-wall-street-reforms/
Have to copy/paste the link for some reason....


I just support actual Americans instead of corporations, you should try it sometime.

I find this statement ironic considering that you openly advocate and spread propaganda for those that systematically rob the poor to give to the rich.

You help government criminals steal money from the poor.

But I dont see the republicans offering any viable candidates to counter bernie.

Anarchy would be fine with me as long as I was the big dog too, but we don't all like barking and running around on all fours.

It's not successful ANYWHERE.


Actually Sweden, Norway, Finland , Iceland and denmark are doing very well.
They have the worlds highest standards of living and lowest deficiets.

Europe is NOT one big country. There is a vast gulf between the Scandinavian countrys and the corrupt debt ridden cess puts of southern Europe like greece.


BUT due to the size of the USA compareing what works in Norway to the USA is pointless as the sheer size of the USA would make such policys impractical.
edit on 2-11-2015 by crazyewok because: (no reason given)

If you cant figure that out for yourself there is no point explaining.
If you cant grasp very simple concepts involveing beurocracy and layers of government then you really need to go back to school.

posted on Nov, 2 2015 @ 11:42 AM
link
I love reading about the wealth redistribution on ATS. The biggest redistribution of wealth in history, took place in the financial crisis of 2008. When the poorest were forced to bail out the capitalist financial institutions to help save the capitalist system from collapse, so I have to laugh at those complaining about the poor stealing from the rich, when it was completely the other way around yet your capitalist media promotes the lies and divides your country. There was a class war and the ruling class kicked the working and middle classes asses into submission. 3 cheers for the ruling class those guys are the real winners in the game and have left everyone else fighting for scraps. Can't you see when you've been had?

Can't you see when you've been had?

Yes, many of us can see it but it's hard to create change when so many people are cheerleaders for the criminal actions of the rich and government stooges they bought-out.

To you Bernie supporters, how do you think Sanders could get anything passed in Congress? In the not so distant past, he has tried to push policy in the Senate. Policy that is very similar to his rhetoric on the campaign trail. He has not even gotten 1 co-sponsor in the Senate, not even from Democrats, for his Single Payer Healthcare and College For All bills.

How's that for some Anti-Bern Cream?


Oh, he will get things passed. Congress cannot wait to spend that kind of money. It's just that the plans that will be passed will follow the model of the Affordable Care Act -- IOW, all of Bernie's 'ideas' will morph into gigantic monster schemes that leave the people worse off and filter the money into the pockets of our corrupt Congress members and those they are beholden, too. 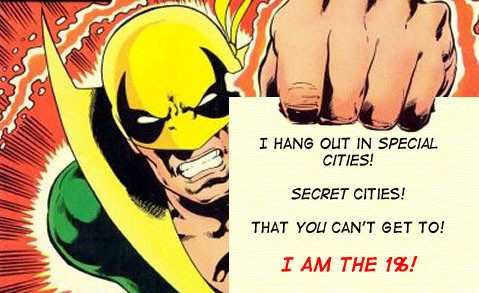 originally posted by: buster2010
a reply to: harvestdog
Right now he is drawing larger crowds than anyone and the people like what they are hearing you can tell that by how he is rising in the polls.


It's called populism, buster, and it's how politicians get votes from people like you.