Fellow Canadians... Lets have a chat :)

originally posted by: intrepid
a reply to: bobs_uruncle

The Monarchy is NOTHING NOW. Jeez. 21st century. It's tradition.


Then explain to me why we have a groveller general? Explain why the asshat we allegedly voted for, to run this colony, can be fired by the queen's representative? Oh, and why are we glorifying this inbred welfare family in our post offices and courts? And why is IT still on our fiat currency?

For nothing, its pointless imagery sure seems to get around...

posted on Sep, 30 2015 @ 09:22 PM
link
I'm not Canadian, but I wanted to stop in say that I get so tired of American politics, and lately there have been threads about UK politics, and Canadian politics, and for some reason it pleases me enormously.

It seems everyone else is just as disgruntled as we are. Not that I'm happy about that... but you know the deal.

Political Partay! Quiz
edit on 9/30/2015 by luciddream because: (no reason given)


originally posted by: dukeofjive696969
Im going ndp, they seem to be the least evil of the 3, i would vote green but i think a vote for ndp in my riding would help take out the conservative seat.

Yup. That's what I'm seeing. AND the NDP just took over Alberta after 44 years of Conservative rule. THAT has 2 meanings. 1- Alberta didn't like the continual drain on the middle class for the rich. 2- And they went NDP, not Liberal. I believe that gives legitimacy to the NDP.

I was in Brampton this week though and it looked REALLY red. Liberal. I know that's a small part of the Golden Horseshoe but if that is prevalent say Hi to PM Trudeau.

Well it would have been the Wild Rose if not for the members that jumped ship like the rats they are, just to make their grab for power thinking the CONServatives would win again. Turns out the Wild Rose are just cons with a different mask on. It’s so funny how Smith is now out of politics; she got the royal boot from voters for her grab at power, and Prentice stormed off like a mad child after his party lost. So, no we had no other choice but to vote NDP, I doubt they will get a second term if they don’t pull their socks up real quick. Liberals will never win in Alberta.

Harper is just in it to line his and his buddies pockets while the homeless number rise and the numbers using food banks increase every year. Harper needs to go sooner than later. So here we are again, Liberals or NDP, it’s hard to tell which is the lesser of the two evils. The other parties don’t have a hope to form the next gooberment.

It’s time we flush them all and start with a clean bowl.

yeah, i'd say harpers not too popular right now..
Harper Unveiled and Nekkid.. remember this?
www.straight.com...

Hey, Akragon! I didn't know you were Canadian!

Well, biting my tongue to spare you an incredibly long, scathing rant, providing various details to explain my views, and links to prove I'm right, I will lightly touch on...don't even want to say the High Treason Criminal's name...(ah, if you're curious, just Google: "Investor State Dispute Settlement." I decline, I decline...

1. No idea and I fully believe the last election was rigged. Some people believe the previous ones were as well and I consider that also. The reason why I believe the last one was rigged (besides an immediate gut feeling I had that night,) was that after an almost never-ending series of scandals that would make any attack ads producer blush, he actually received more votes and got in with a majority government! If you believe that, then you must believe that the mainstream media exposing a party in power for being a bunch of criminals has absolutely no sway over the Canadian voter whatsoever. I do not concur. God help us if I'm wrong.

2. Because they have nothing on him, but simple attacks are best (theoretically.) Of course the B%W attack ads against Jean Chrétien backfired. Harper was young when he first ran. I believe he started dying his hair grey at one point to make himself appear older. It's all about appearances.

3. I have no idea. It's socialist-democratic, not socialist as in communist. It's better than fascist-democratic, which is a contraction in terms and yet that's what we have.

As for the NDP, I voted for them in the last federal election, mainly because I liked Jack Layton. He struck me as a door-to-door salesman, but the kind you'd welcome into your home and have a cup of coffee with. I really liked the idea of a prime minister who I personally liked. Also, I am strongly against Free Trade. So is the NDP, in theory (however I happen to know for a fact that the big corporations, one which is a household word, have the...impression that their interests will be represented no matter which party gets in (truly, they are fully unconcerned about that!) As I live in Nova Scotia, a province dissimilated by the awful, terrible, corrupt Darrell Dexter government, I now have a very different view of them as a party. Our current Liberal premier was at least honest enough to tell us that we are basically bankrupt and it will take some time to get back to where we were--honesty, instead of Dexter's flat out lying to us that we have a surplus! The NDP let Dexter run again, in their name, and were actually surprised when he didn't get back in!

No exaggeration, in my opinion my province (which was in very rough shape to begin with,) have had to deal with the worst prime minister and the worst premier in our history both at once! You can probably take a wild guess who I'll be voting for this time. I hate to, because I am very ardently against Free Trade, but it really doesn't sound like anything short of a revolution is going to stop it at this point, sadly. At least the Liberals are good at managing the economy (partly because they don't only represent big corporate interests.)

Side note: I don't dislike Conservatives in theory, only because they are currently mindlessly supporting a dictator who is perverting our democratic system into something which, well, you would have had to have followed the legislation to understand where we are headed...

Yes indeed, it seems that many countries around the world are facing the same exact problem: nations being corrupted in the interests of the global elite (or the criminal elite, as I like to call them.)

I always liked Blue Rodeo, but now I love them! 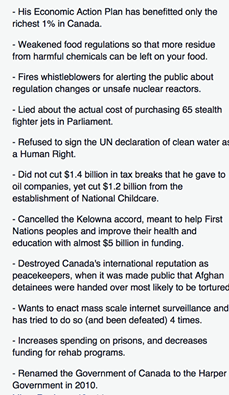 
As I live in Nova Scotia, a province dissimilated by the awful, terrible, corrupt Darrell Dexter government, I now have a very different view of them as a party. Our current Liberal premier was at least honest enough to tell us that we are basically bankrupt and it will take some time to get back to where we were--honesty, instead of Dexter's flat out lying to us that we have a surplus! The NDP let Dexter run again, in their name, and were actually surprised when he didn't get back in!

No exaggeration, in my opinion my province (which was in very rough shape to begin with,) have had to deal with the worst prime minister and the worst premier in our history both at once! You can probably take a wild guess who I'll be voting for this time. I hate to, because I am very ardently against Free Trade, but it really doesn't sound like anything short of a revolution is going to stop it at this point, sadly
.

Nova Scotia here too, and Like Akragon, was never much into politics...till I moved out here. I've heard stories how the NDP fouled up things here, and obviously a PC vote will edge Harper back in. Seems to leave many with no choice but to see red and vote Liberal. However...why is nobody paying attention to Elizabeth May and the Green Party? I have watched her speeches and interviews, and those debates (that she was invited to)...( thank you Twitter)...and imho, she has all the required elements for leading this country. She also has no need to mudsling an insult at other party leaders every time she wishes to make a point about the path her party would like to see Canada/ Canadians take. Sickens me to see Harper , Trudeau, and Mulcair do that. My vote, for all it's worth...will be GREEN. I don't just want to stop Harper...I want to stop the madness that has overtaken my country.

We only require a few things...

2. Accept the national beverage of Canada... and find the nearest location of said store 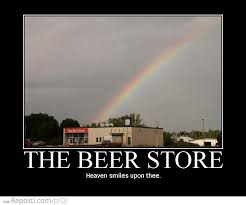 4. We actually only have two seasons up here... winter, and the other few months... Its frickin cold up here 3/4 of the year...

What do you think about the polls, Akragon? Everyone I know says that everyone they know (except a couple I've heard about, but they're rich) are going to be voting against Harper this time. So many of Harper's own base are outraged with him at this point. You know you're in trouble when that happens. Yet, according to the polls he's shortly behind the Liberals.
edit on 7-10-2015 by LoneCloudHopper2 because: (no reason given)

My parents say they want to vote for the Green Party. A lot of people like her, women especially I think.

I personally don't. She has a 'Green' party, yet she's never made a stand against Free Trade. For me to take her party seriously I'd want to know if she's for or against it and why. I also really didn't like her snotty reaction to the rebel page who donned the "Stop Harper" sign in the House of Commons. It was a beautiful and peaceful display of expression, and against her most opposing party as well. Yet, she expressed facial offence at what the page did. To me that says a lot.

But to be fair, she has said a great deal of things which show common sense and fairness. She certainly does speak well. I also enjoyed her speech she made while drinking at a social political gathering (forget what it was called.) She later apologized for being offensive, but I personally she felt had nothing to be apologetic about. She was sort of kidding around but also speaking against the Harper dictatorship. It really showed her humanity though, which is a breath of fresh air from all these years of Harper.

And you're right, smaller parties get very little press and very few opportunities to be heard and it isn't right.


The Green Party supports fair trade that puts sovereignty, human rights, and the environment first and does not support trade agreements that put the rights of multi-national corporations first.We recognize that trade is an important component of a sustainable economy but that it cannot hamper or undermine sovereign efforts to protect and enhance local quality of life and build local economies.

The Green Party is about transforming − shifting mind sets, shifting taxes, shifting emphasis in trade from a failed free trade model to a proven fair trade model, and it is about shifting emphasis from global to local development. We recognize the costs and limitations that fossil fuels will increasingly place on global trade and transportation, and the need for local and community participation to achieve sustainable communities.


You mean this memorable Omar Khadr speech? Definitely one of her shining star moments.

Yes, that's the one! She seemed very open and honest. Usually only comedies manage to make politicians seem somewhat human.