Fair enough, thanks for the clarification. I've personally been to a few Evangelical churches that were damn conservative. Like no differing in opinions unity. Small church with a lot of fundamental views. The Catholic churches I've been to were pretty large with a pretty broad attendance. But that just personal observance, so it don't mean squat really.

The Roman Catholic Church is, in my opinion, the most conservative organization on the planet. The Baptist and Protestant churches are offshoots of the RCC, so they are actually slightly more liberal than the RCC.

Historically, it's hard to disagree considering the role of Protestant Reformation in the Enlightenment.

That said, in recent decades, the Catholics have moderated in some ways that many protestant denominations haven't. Not that Catholic positions on most things aren't wholly conservative (contraception, reproductive rights, marriage equality, etc) but at least they're not denying science to the degree that the fundies are (e.g., the Catholic Church supports theistic evolution) or preaching that homosexuality is causing natural disasters.

I think the Pope should be compelled to perform Gay Marriages By the Queen!

I believe our Constitution was written by men that recognized a deity that grants humans with certain unalienable rights. Such human rights make up our humanity.
I believe people have the right to not participate in actions that go against their conscience. The beautiful thing being, Government is so large, there will always being other people willing to do the task at hand. The objector should trade work with them, or proper channels should be followed to terminate their employment. I do not believe jail is the right place for a conscientious objector.
I also believe or Constitution makes it clear, State Religion is a big No-No. Namely because the biggest Religion in the world also have the most number of sects probably. People can use their holy books to guide their Individual life, Federal Government may not use those books to oppress others. Some people seem to conflate those two issues.

Yea, in the end, it's still an opinion. There are good arguments for and against such an idea. I can see your side of things as well.

originally posted by: harvestdog
The objector should trade work with them, or proper channels should be followed to terminate their employment. I do not believe jail is the right place for a conscientious objector.

The objector not only objected for herself, she ordered her deputies to object, as well. She didn't allow any licenses to be issued from the office from June to her jail time. NOW, they are issuing licenses. Seems jail knocked some sense into her. A little, anyway.

The proper channels to terminate her employment is a meeting of the legislature, which costs $60,000 per day. They meet in January.

This whole Kim Davis/Pope thing has me baffled. I grew up Pentecostal, and Kim Davis is an Apostolic Pentecostal Christian. They don't believe in the Trinity, and they certainly don't recognize the Pope as the "Vicor of Christ". Most Pentecostals that I know think the Pope is the Antichrist.

Also, I wouldn't trust a word her Lawyer has to say. He's been outed as a liar for claiming that 100,000 people gathered to pray for Kim Davis in Peru. Here's a picture of the supposed rally! 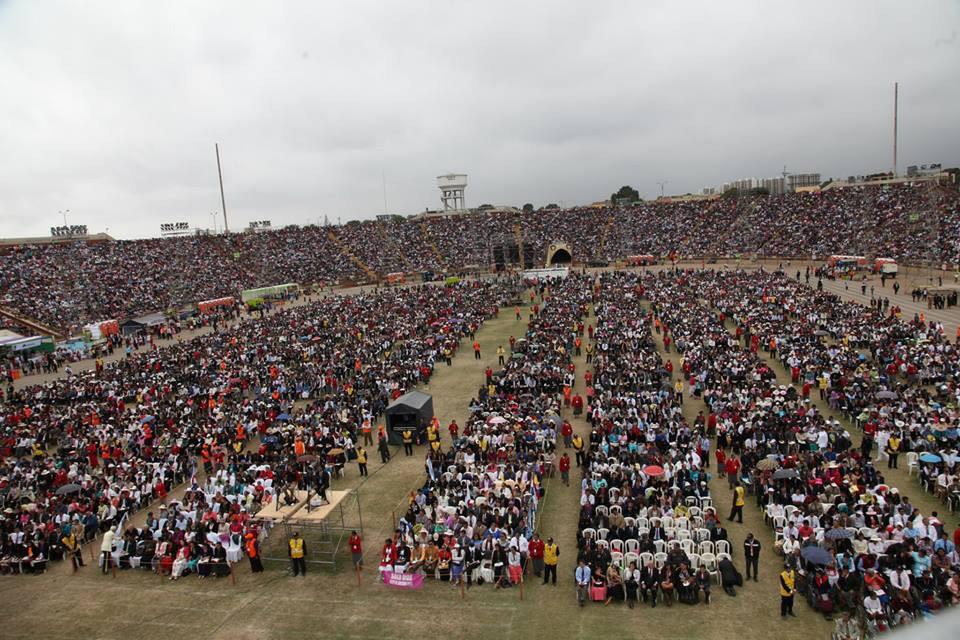 We were sitting on his front porch one day when I was surprised to hear him say that religious leaders are some of the biggest parasites in the world.

The term 'Conscientious Objection' implies no actions which would trample anyone's rights. If the Government makes a law trampling someone's rights that is against the Constitution. An Individual refusing to hand out an application or refusing to sign a license does not trample someone's rights. Government should and does have policies for dealing with problem employees. The policy should be followed, or we are a Banana Republic.
Perhaps he did not agree with her stance, but he did agree with her right to have that stance.

In general it seems like conservatives and the conservative media hold incongruous views of the Pope and his relevance to political issues. When he's talking about global warming and the poor, it's all, "he has no business speaking about politics or science!" but then when it comes to what he apparently said to Kim Davis, that all evaporates. Consider the tone of the following Brietbart pieces. I've excerpted some passages to demonstrate the radical contrast in tone:

“While the media elites were slobbering all over themselves because Pope Francis commented on climate change, the Pope was having a quiet and powerful meeting with a humble Apostolic county clerk from Kentucky,” Huckabee told Breitbart News.

During the Pope’s meeting with President Obama last week, he lectured Obama on religious liberty.

American Catholics, Pope Francis told the president in his remarks delivered in English, are “concerned that efforts to build a just and wisely ordered society respect their deepest concerns and the right to religious liberty.”

Over and over, he had the cameras on him. And over and over, he failed to take advantage of the situation to speak truth to power, instead catering to the hard left again and again.

Here are seven ways in which the Pope insulted conservatives during his visit:

The Pope’s visit could have been an incredible opportunity to fight against Godless immorality in the United States. Instead, the Pope largely used the opportunity to push leftism slathered over with paper-thin theology. That’s a tragic loss for both the world and for the religious community fighting for survival against the onslaught of an increasingly aggressive secular left – a secular left that cheered the Pope but will be happy to either coopt or crush his church at the first available opportunity.

posted on Sep, 30 2015 @ 11:47 AM
link
The Pope is encouraging a citizen to defy the Constitution she took an oath to in her government job.

How is that his place?

Let me start by saying. I do not agree with Kim Davis and her views.

However. It is her right to believe what she wishes to.

But while she has the right to believe in what she wants. She doesn't have the right to impose her beliefs upon someone that does not share them.

And further in her capacity as an elected government official. She is IMO unconstitutionally denying someone else their rights.

Remember folks. As of yet we don't have thought police in this country. You are free to believe in your brand of crazy. For now.
edit on 30-9-2015 by grey580 because: (no reason given)

originally posted by: harvestdog
a reply to: uncommitted

Your questions cannot be answered by me. According to Davis' lawyer they met for about 10 minutes and pictures would be released at a later date. I know not of what they said to each other, but I get the impression it wasn't a scolding on her beliefs. He asked her to pray for him, maybe that he might have the courage to take a harder line himself.

Whenever he meets someone typically he says he will pray for them and ask them to remember him in their prayers. I hope I didn't suggest he scolded her, but it's not clear if he supported her action (tricky one as at the end of the day a state marriage has no religious overtone) or if her supported her acting on her moral beliefs - not the same thing.

Well considering that she was not Catholic at the time, I would suggest he is wise in not condemning her for it. All were lost at some point. Christian doctrine says repent and sin no more.
He has bigger fish to fry than some former harlot.

I would disagree there, I think they disagree with this particular pope but like the general idea of a pope.


Who is that? Conservatives? I hardly know any Conservatives that believe in the Pope. It is heresy to them. Nobody speaks for Jesus but Jesus.

Yeah well, what are you doing to do? Throw her in jail?

If she continues altering licenses I would be tempted, but I'm not the judge.

She isn't a federal worker. She is a county clerk. A clerical position, like a government secretary for one county in Kentucky.

If there is such a great case, do you think the DOJ will charge her on Civil Rights Violations? How long should she serve, on conviction, according to you?

But, I admire the choice in the man who is Pope.